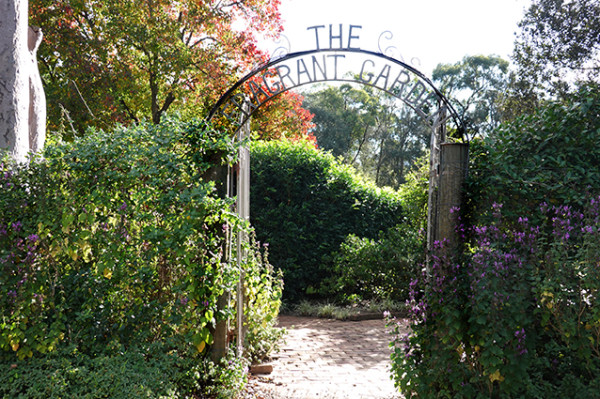 Move over Sydney, the Central Coast has got the daytime gin bar exactly right at Bar Botanica. Well, it will have when Liquor & Gaming NSW finally gives the green light to sip gin wherever you want inside the grounds of The Fragrant Garden. 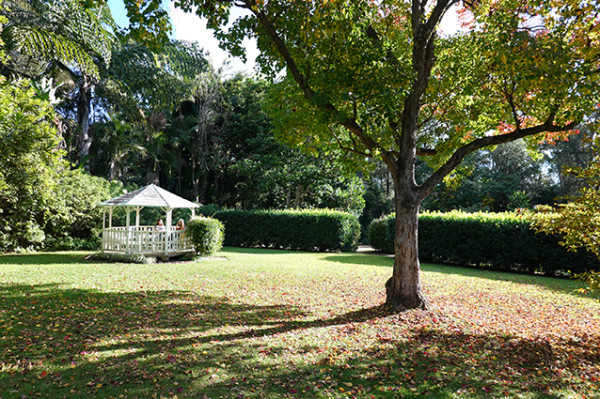 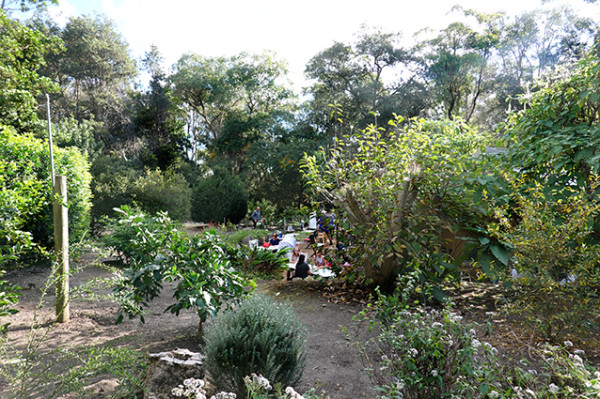 Since 2005, the three-acre garden has been home to herbalist and distiller, Philip Moore’s, Distillery Botanica. 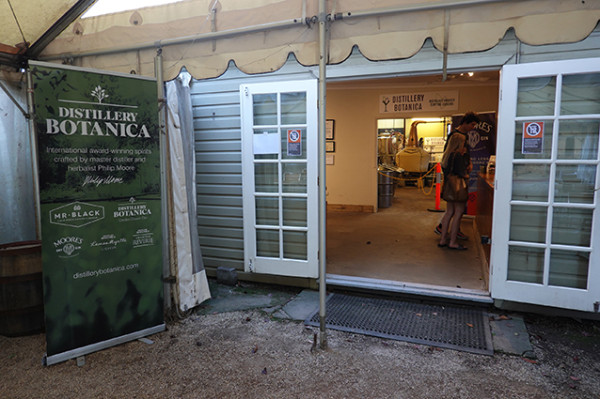 For a boutique distillery, this outfit has had more than its fair share of hits, including Moore’s Dry Gin, and Mr Black Cold Brew Coffee Liqueur. The latter forms the basis of at least half the espresso martinis you’ll find littered across Sydney’s cocktail bars. 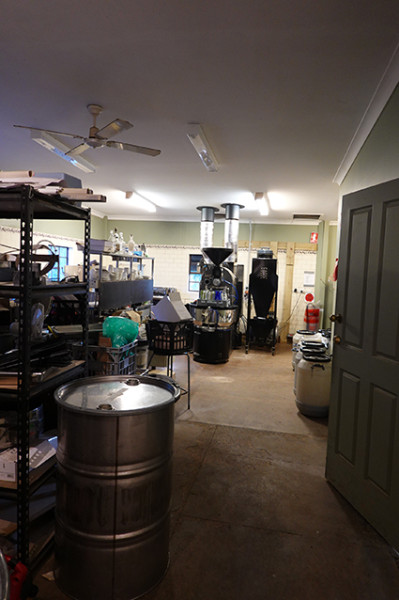 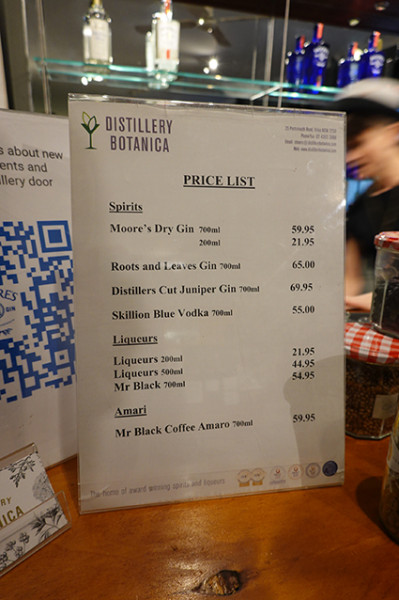 If you try it, you’ll see why. Mr Black is cold brewed to yield a genuine coffee flavour and aroma, with no added sugar to unbalance your resulting drink. The coffee is roasted onsite – a chemical reaction called the Maillard reaction is what produces the toffee and chocolate notes – in a machine that you can see by peeking around the banners in their distillery door. 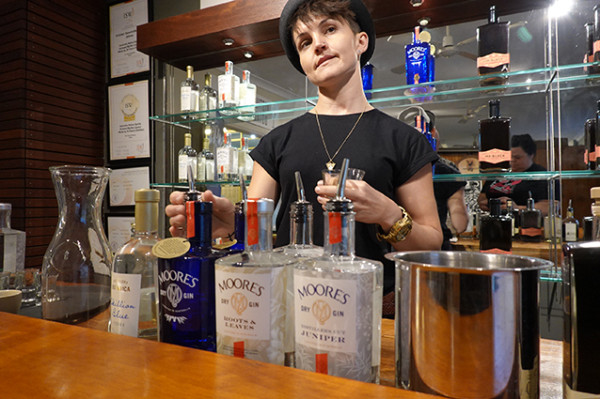 Inspired by the garden, Moore marries the best quality botanicals with the purest spirit possible, resulting in gins that have a real sense of place. 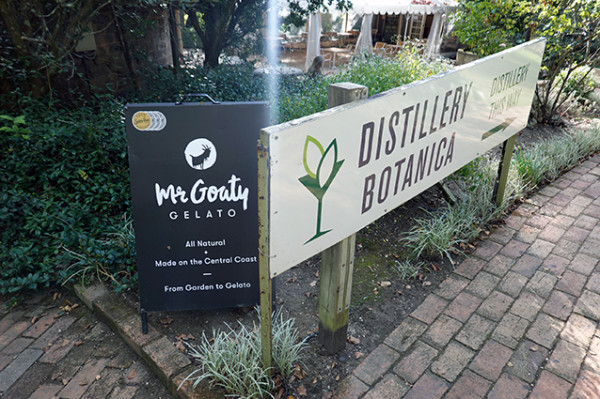 About two-and-a-half years ago, Moore was joined at the Distillery Botanica site by local couple, Julia and Dan Hughes. You might know Dan from his time in Bronte’s Three Blue Ducks kitchen; or you might have already sampled his Mr Goaty Gelato somewhere? Trying it had been on my mind since seeing it at Duck Duck Goose a few years back. 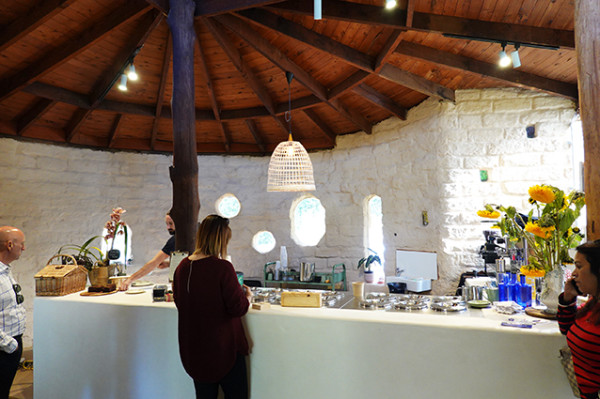 While they’ve been churning gelato onsite for the past few years, opening Bar Botanica is a more recent endeavour for the pair. It started with renovating the attractive 1970s mud-brick hut into one of the prettiest places I can remember eating gelato. The resulting garden café, bar and gelateria is basically the only place you can now get Mr Goaty Gelato, which isn’t really suitable to roll out into shops because it doesn’t contain chemical stabilisers. 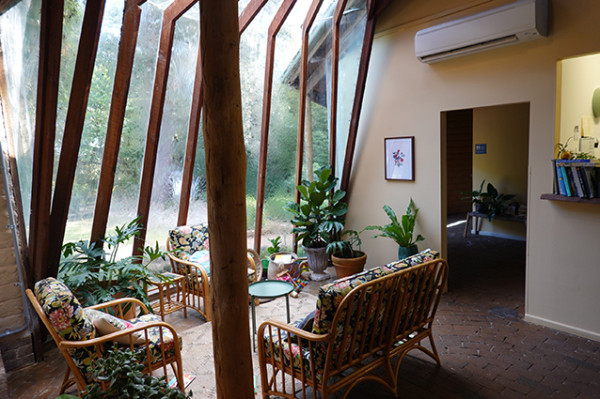 The only other ways you can eat this gelato are from their vintage ice cream van, which you will find at events like the Avoca Beach Markets, or by hiring their wooden kiosk or gelato tricycle for your next event. The synchronicity between the two businesses – Distillery Botanica and Bar Botanica – is pretty incredible. 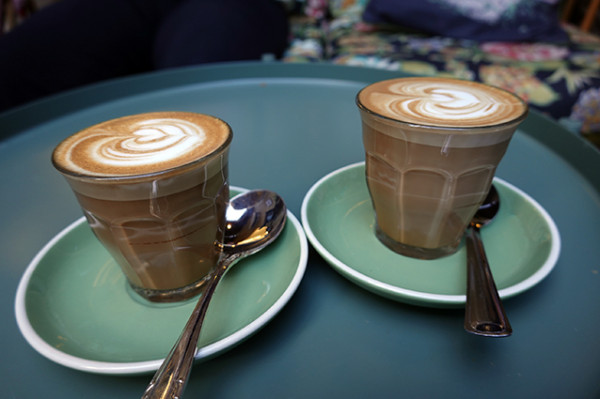 Both the gin and gelato often employ flowers and botanicals from the garden that surrounds them. The same coffee beans you’ll find in Mr Black are served in Bar Botanica. 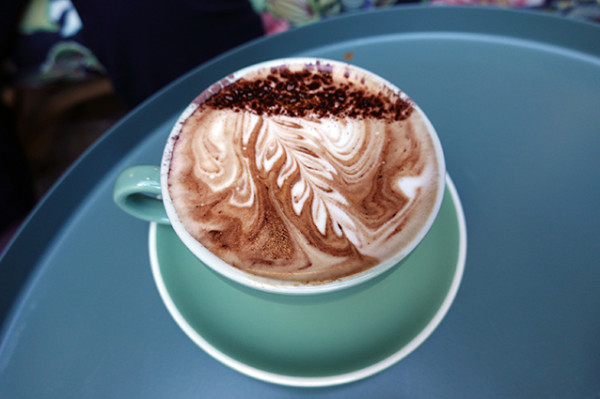 I try it across a Piccolo Latte ($3.50) and a Cappuccino ($4) and really rate it – robust and throaty. The wider menu, which takes the British concept of ‘elevenses’ and extends it to all day, employs Distillery Botanica's Blackcurrant Liqueur in their chicken liver pate, and Moore’s Gin-spiked Cheddar in their ploughman’s lunch. 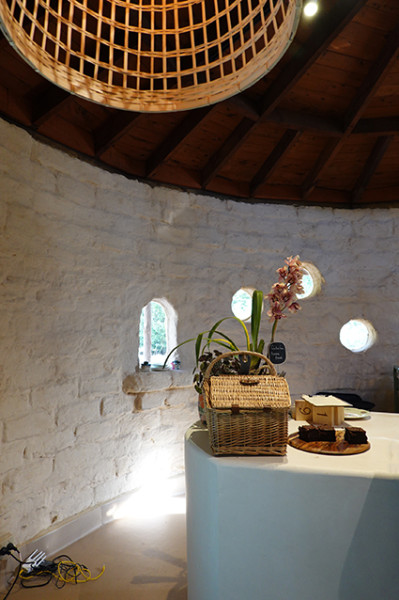 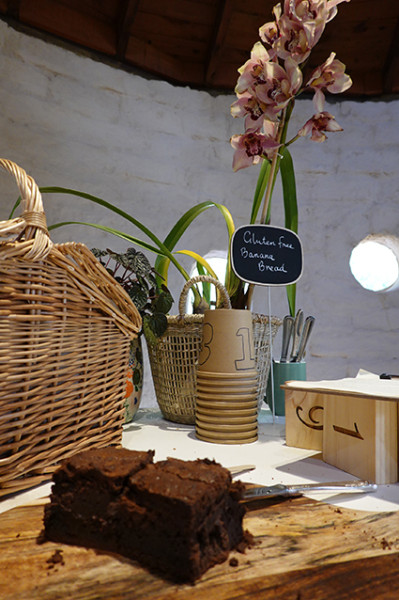 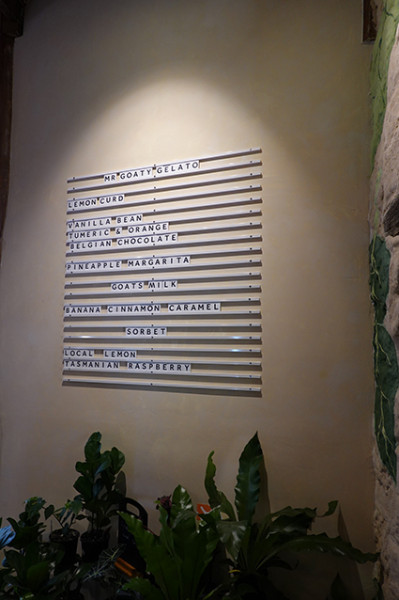 I’m here just to eat gelato, though the rich-looking brownies on the counter did give me serious pause. My first surprise was hearing from Dan that, despite the name, the majority of flavours on today’s eight-flavour list are made using grass-fed Jersey milk. They do always keep one or two goat milk-based flavours on hand, as well as some dairy-free sorbets, neatly catering to everyone’s dietary requirements. 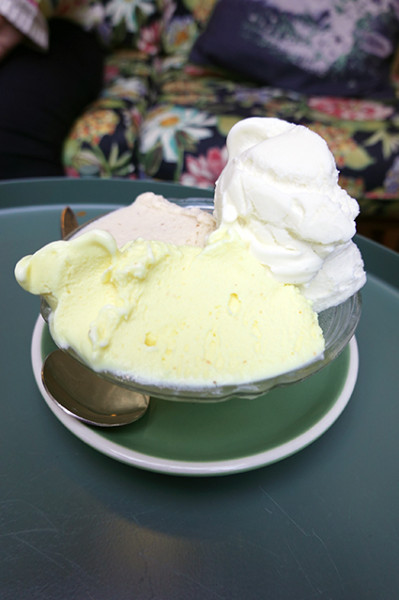 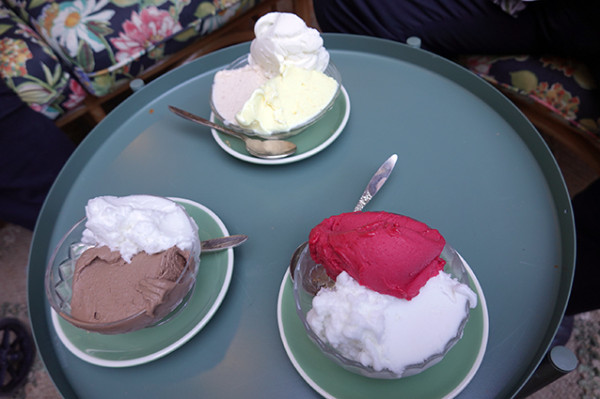 We get stuck into six different flavours across two Duos ($8) and one Trio ($10) with a fifty-cent add-on for choosing the only goat milk flavour – banana, cinnamon and caramel. It’s lighter than I expected, and creamy on the back palate. By adding coconut oil rather than goat's cream, Hughes reduces the ‘goaty’ flavour, resulting in an easy-to-like gelato where I doubt you'd easily pick the milk. 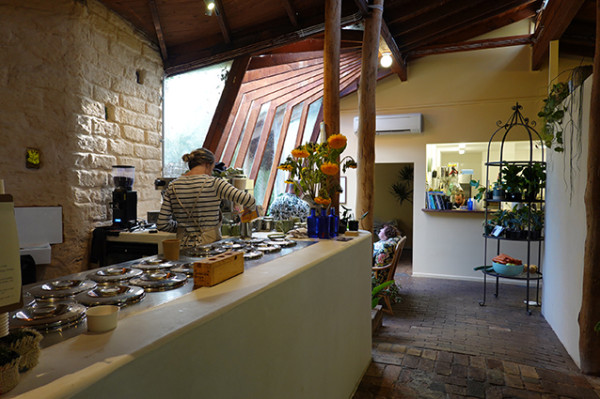 The first thing that strikes me about his cow milk gelato is the texture – every flavour I try is oh-so-silky and smooth. Along with being lower in fat than ice cream (because it uses milk rather than cream) gelato is served at a slightly warmer temperature than ice cream, which neatly avoids ice crystals. Dan also stores his gelato in the traditional way – stainless steel cylinders called pozzetti - that keep it temperature controlled at all times. As attractive as those mountains of gelato look, gelato stored this way is much better! 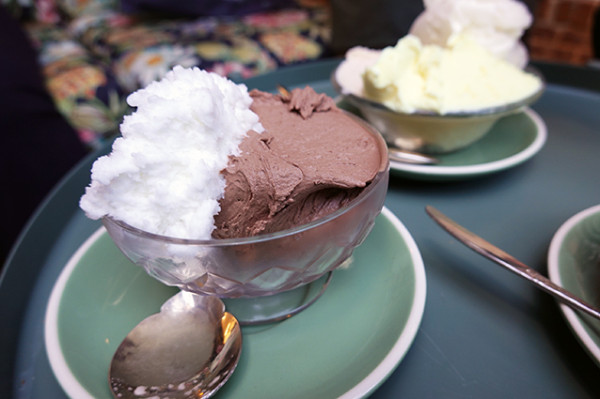 I kick off with the insanely good vanilla bean that hits you straight in the pleasure centres, transporting you back to retro corner store vanilla milkshakes served in ice-cold stainless-steel cups. While Belgian chocolate will no doubt please the choccy fiends, I’m more drawn to turmeric & orange. The turmeric was growing in the garden until this very morning when it was dug up and churned directly into gelato because Dan sold out yesterday (so he was up most of the night). You don’t get more garden-to-gelato than this! In the resulting light but volatile gelato you really get a sense of turmeric being a root like ginger, with none of the chalky traces you get from using powdered spice. 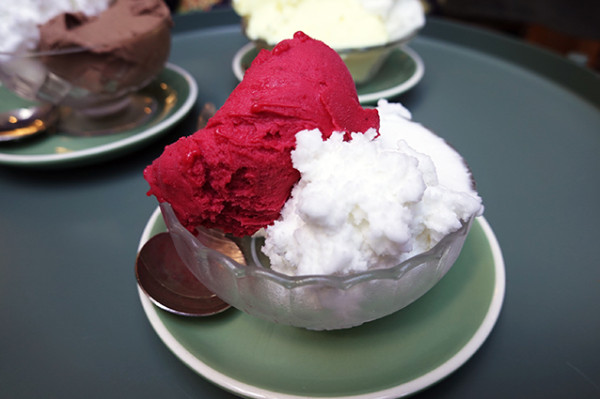 Mr Goaty’s sorbets are also a standout. Local lemon is made using fruit grown in nearby Mangrove Mountain. It’s lovely and sherbet-like, walking the line perfectly between being too sour and being too sweet. I can see it working perfectly in a gin gelato cocktail down the track. I end on deep red Tasmanian raspberry that literally explodes in your mouth with juicy, ripe fruit. 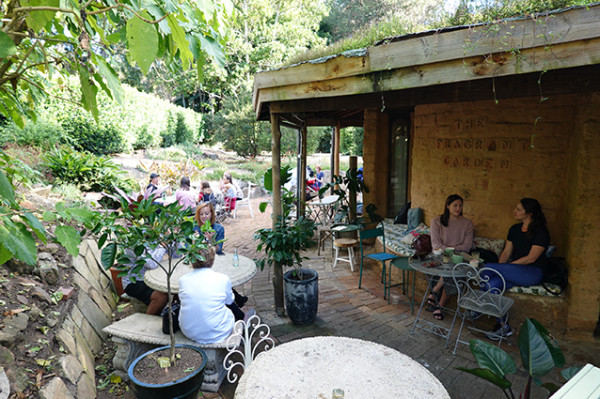 When the liquor license arrives so you can take your gin and gelato anywhere in the fairy-tale garden, the Bar Botanica experience is going to be very hard to beat!