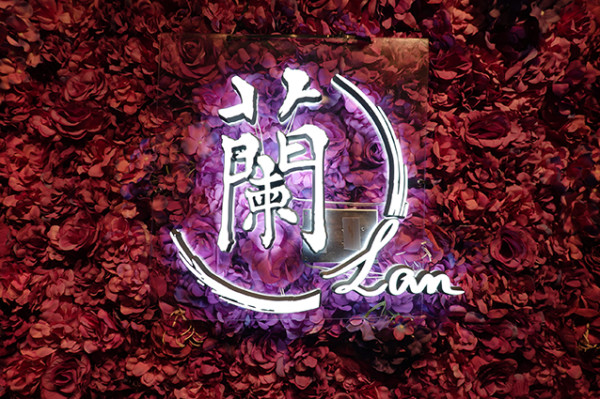 Lan Dining is the latest venue by the China Chilli Holding Group, who might already be familiar with if you like to eat spicy food. They have eleven Australian restaurants, seven of which are in Sydney, most flying under the Spicy Sichuan banner. 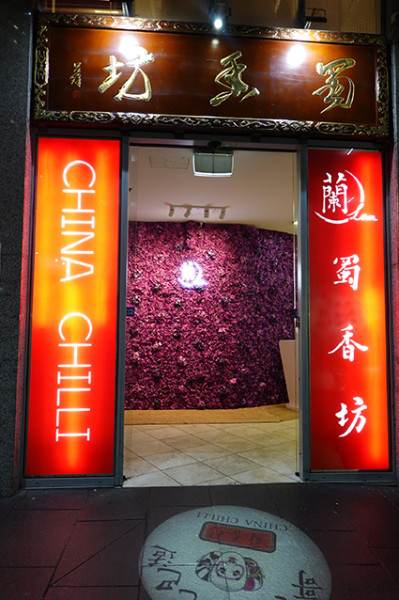 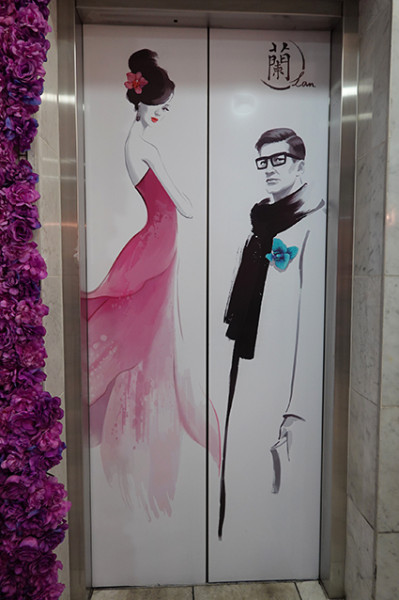 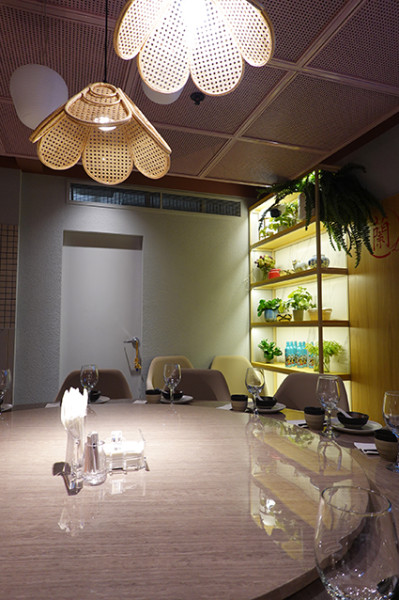 You’ll find Lan Dining in a quietish part of Haymarket, sitting above China Chilli (one of their more traditional hot pot restaurants). It’s the group’s first incursion into Chinese fine dining, though there’s an even fancier restaurant in the pipeline, at the base of the five-star Westin Hotel in Brisbane. Now this isn’t Sydney’s first trip around the Chinese fine dining block – Waitan and China Republic both tried this route in late 2013 with limited success (both restaurants have since closed). 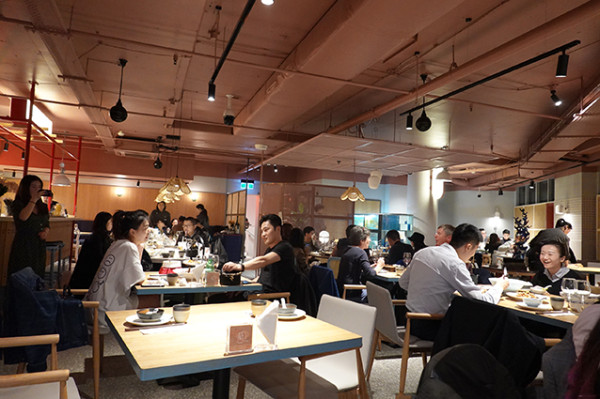 Early signs at Lan Dining are good, with a mostly Chinese audience already filling up the tables on the rainy weeknight I visited. The early success is perhaps helped by the fact that the China Chilli Holding Group have owned this site for a while, albeit operating as a different sort of restaurant. 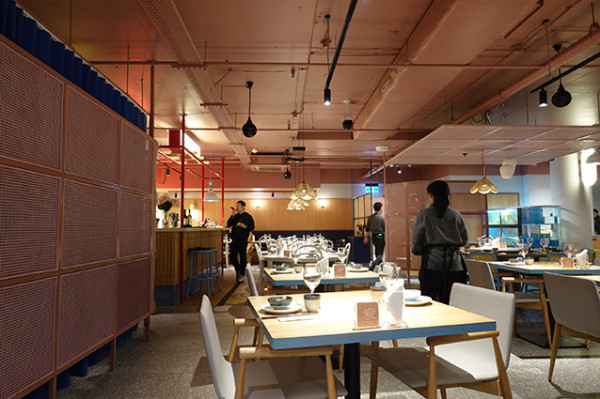 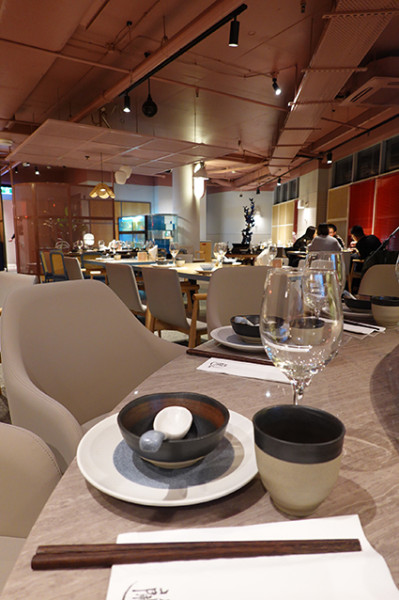 With pastel hues and comfortable fabric bucket chairs, the fit-out feels more contemporary China than any of Sydney’s Chinese fine dining predecessors. While the lazy Susan thankfully remains for ease-of-sharing with bigger groups like the one I’m with, the daggy white tablecloths have vanished in favour of pale-hued laminated wood overhung by flower-shaped rattan pendant lights that play into the restaurant’s Chinese orchid name. 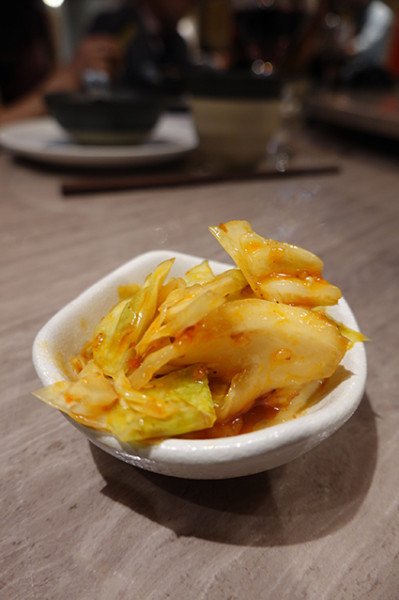 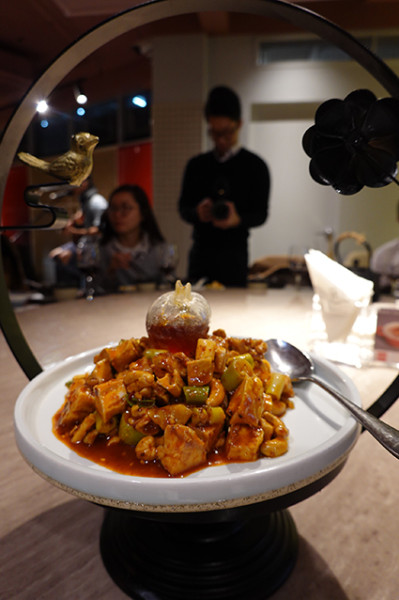 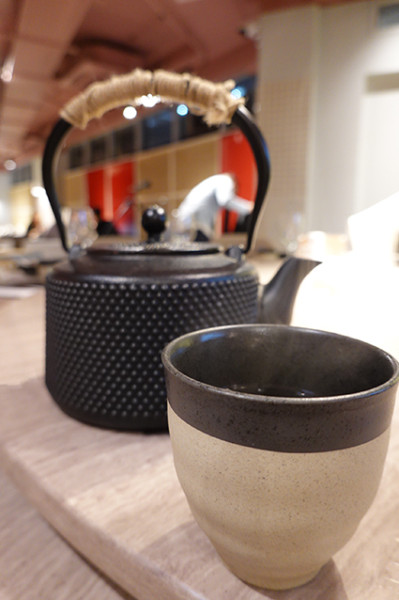 We kick off with Steamed Chicken in Chilli Oil ($22) that arrives in a round metal cage. The chilli oil is in a blown sugar ball that you gently crack to explode over the mix of chicken, cashew nuts and Chinese celery in a subtle peanut butter sauce. It’s flavoursome rather than spicy, but the presentation is on-point, and echoed in each dish we try from the extensive menu. 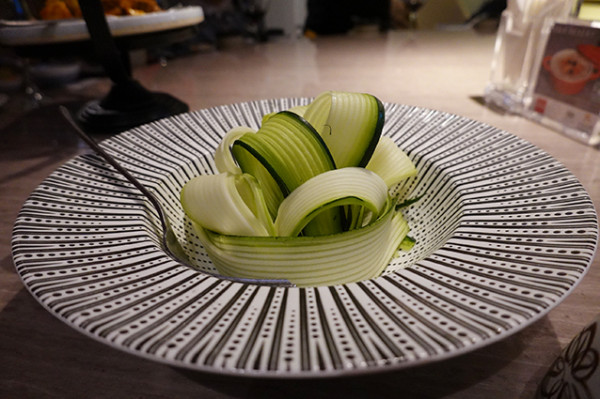 Even the humble shredded Zucchini Salad ($18) has been given a presentation update, with elegantly arranged striped ribbons of zucchini coated in grilled chilli dressing that’s poured over them at the table. 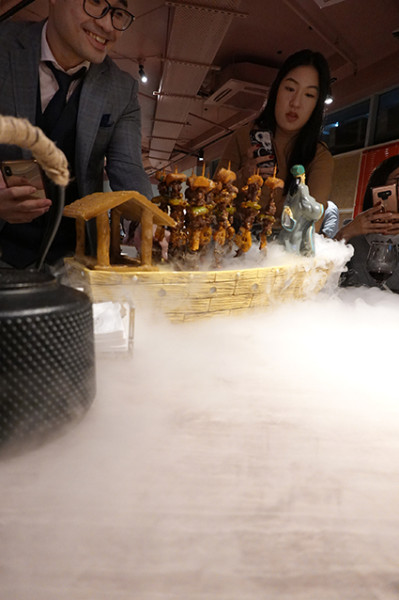 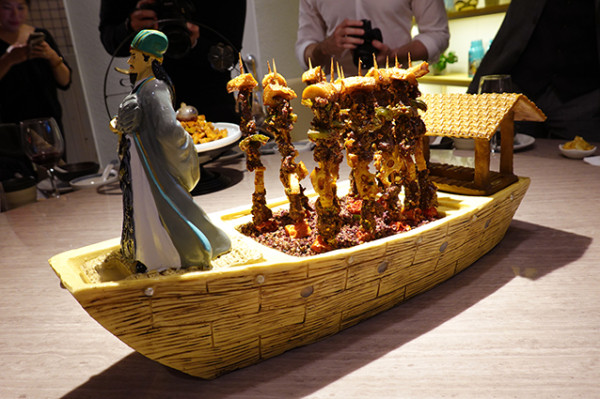 Sailing onto the table in a cascading waterfall of dry ice, the Grilled Kangaroo Kebab ($48) boat is fronted by Zhuge Liang. Wearing a Taoist robe with a crane-feather fan, this military strategist and hero of the Three Kingdoms period in China. More than just fanfare, these spicy lean kangaroo kebabs with mushrooms, capsicum and chilli make great eating, and they’re served sticking out of the Sichuan peppercorns that make this regional Chinese cuisine so distinctive. Cumin is the dominant note, and it’s massaged into the meat to ensure tenderness and good flavour penetration. 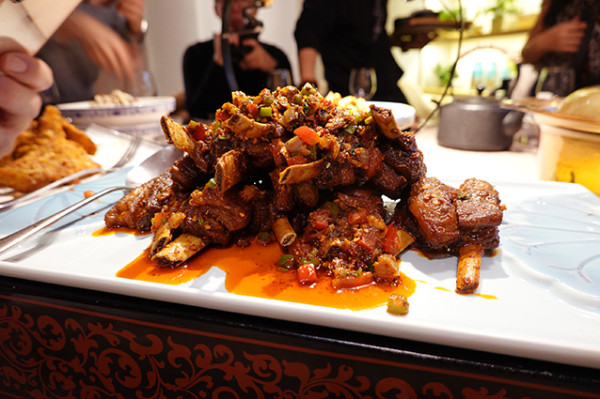 All the meat and seafood, by the way, are drawn from Australia and New Zealand, while the spices and chillies are imported from China to give an authentic flavour to the dishes. One of China Chilli Holding Group's most popular dishes, Spicy Lamb Ribs ($36), also make an appearance on the Lan Dining menu. They’ve been selling them for the past twelve years, and probably turn over a million lamb ribs a year across all of their restaurants. With capsicum, coriander, onion, peanuts, cumin and very well-rendered fat, it's easy to see why they're so popular. 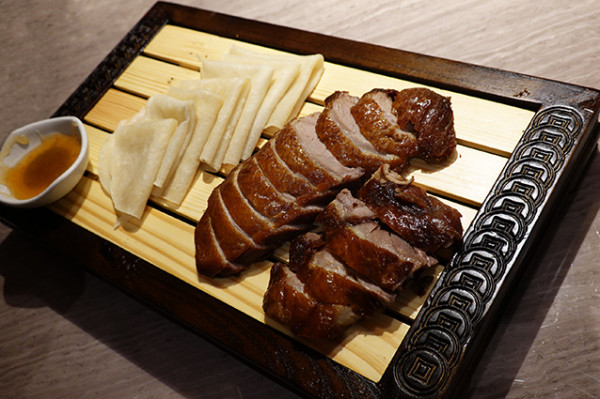 Good quality fowl shines in Tea Smoked Duck ($42), one of the best renditions of this dish I’ve had. The recipe, which takes two days, was inherited by one of the chefs, with the tea smoking getting great penetration into the bird. It comes on an elegant tray with pliable pancakes and a non-traditional plum sauce that I found just distracted from the excellent duck. 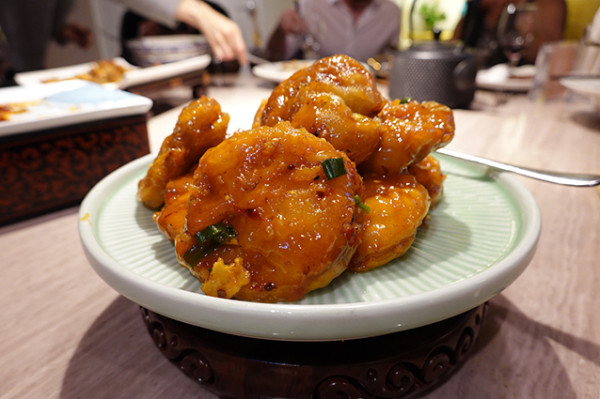 While dining with a group of the Instagram faithful does have disadvantages, like with countless photos letting dishes get cold, the Crispy Eggplant ($23) held up quite nicely. Each round lightly battered disc contained a soft slice of eggplant stuffed with pork mince, which stayed quite savoury under the sweet and sour sauce. 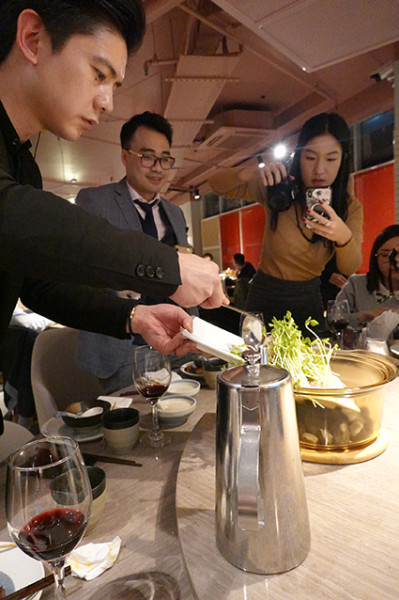 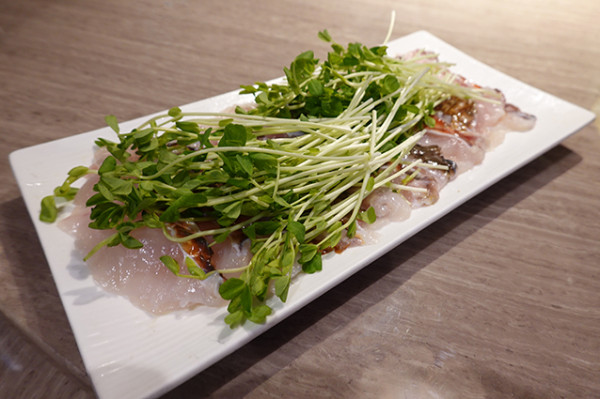 The big advantage of eating with a group this size was being able to try dishes like Live Parrot Fish ($188/1kg) that is too big and pricy for a pair. 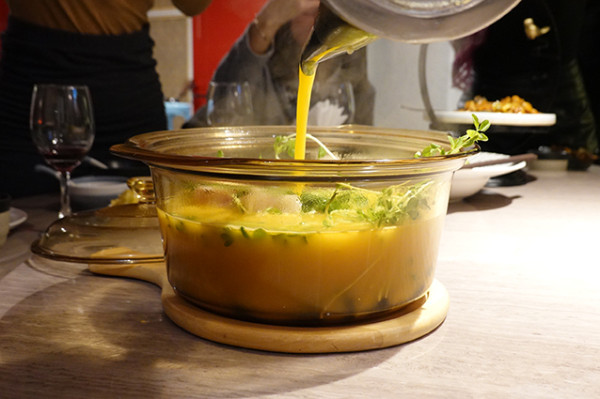 The mostly boneless fish slices are placed with fresh green herbs onto hot rocks with a chicken-based broth poured over them at the table. The stones cook the fish with the lid on, so nothing escapes, resulting in a fragrant, golden soup that I really enjoyed! 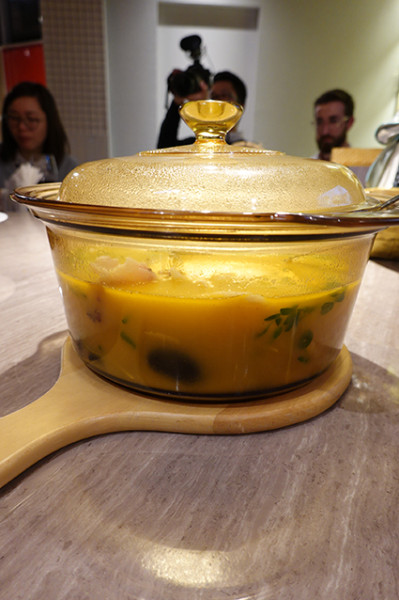 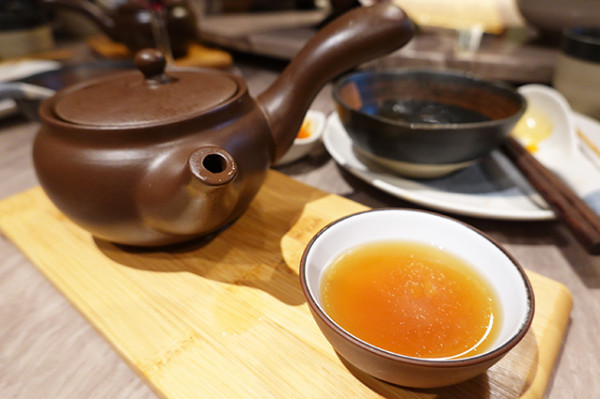 If you’re dining as a pair hit up the Matsutake Mushrooms & Chicken Soup ($16/person) instead. Served like a tea, it’s a complex and beautiful soup that’s earthy and delightful. While Kung Bao Prawns ($49) served under a sugar net had the influencers at my table in a cracking frenzy, the muted dried chilli bite in the blend of crustaceans, cashew nuts and capsicum meant the dish was a bit disappointing to me. 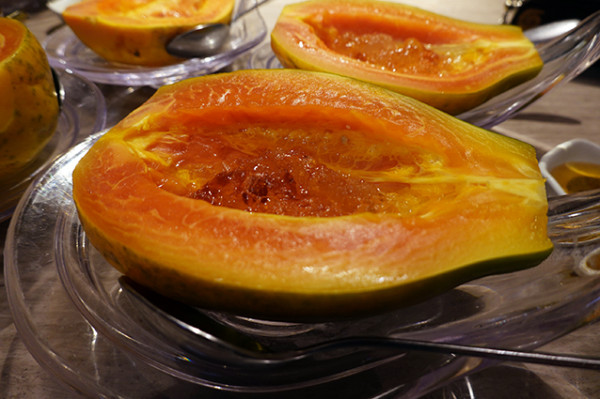 I was more taken with the botanically named Steamed Prunus Persica ($16/each) - that’s peach to you and me. It’s a heated papaya half filled with a fairly flavourless peach gum that’s apparently good for your lady parts. You add flavour with a rock sugar syrup that’s passed separately, though the star of this dish is really the warm papaya that doesn't really need sweetening. I might try it at home with yogurt…

Thanks to Food Critics & Bloggers Australia for inviting me to participate in this modern Sichuan adventure.
Collapse