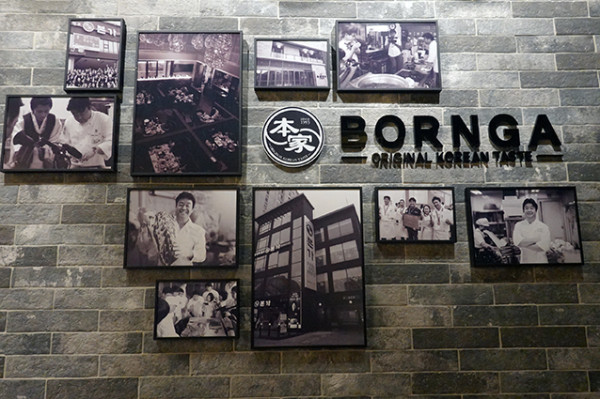 Bornga is a popular Korean barbeque chain fronted by celebrity chef Jong Won Paik. While it kicked off inside Korea, it has subsequently expanded to ten different countries, including Australia. 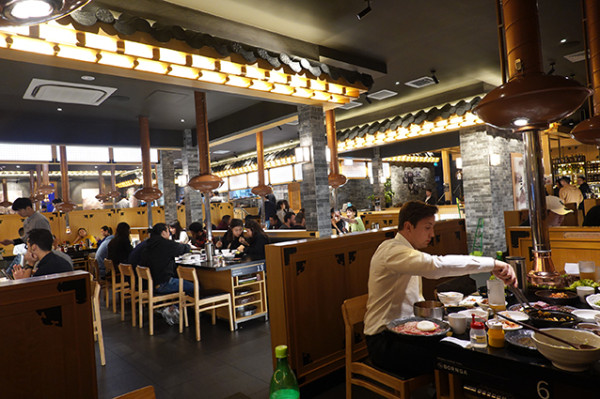 Taking up a first-floor space on Harbour Street, the substantially-sized Bornga is a bit of a Korean theme park. It's decorated with the wooden doors and tiled roofs that are common features of traditional Korean architecture, which tended toward simplicity and economy of shape by using horizontal and vertical lines. 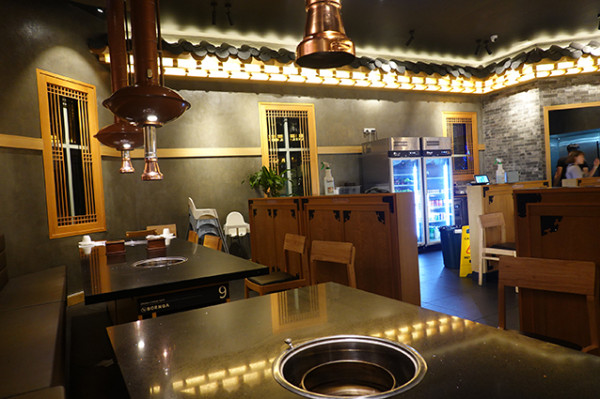 Traditional Korean attire gets pride of place over the entrance door, while on another wall there are black and white photos of the celebrity founder and the original Korean store. 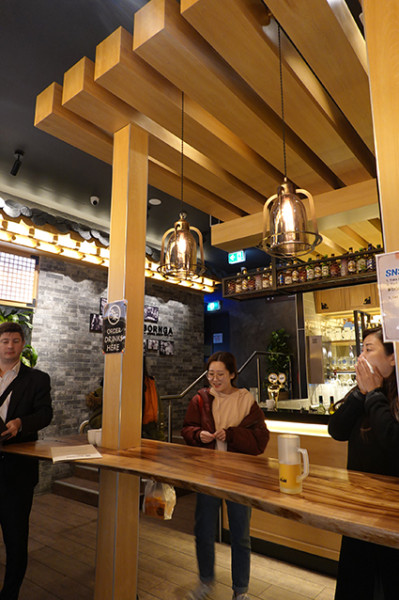 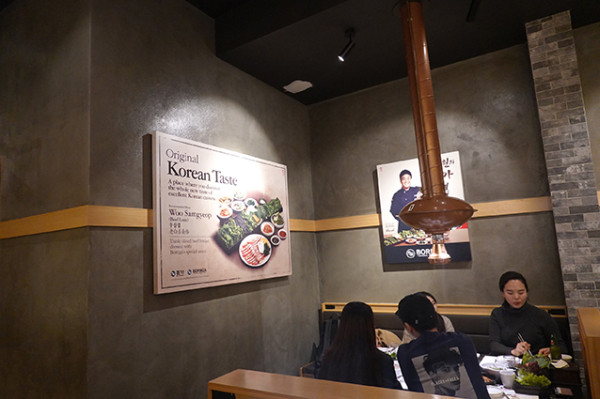 Bornga aims to give Korean expatriates a taste of home, while at the same time inducting new audiences into the Korean way of eating. 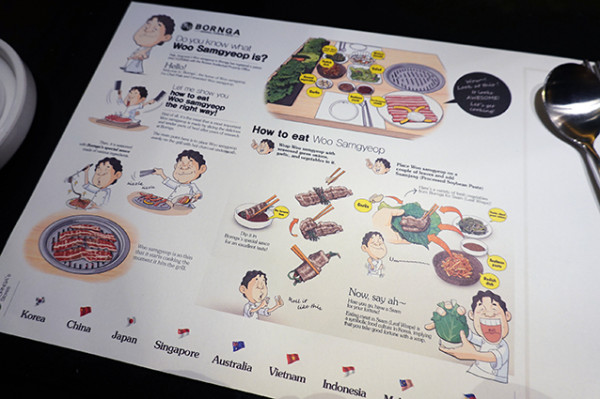 As such, one of the things Bornga does very well is communicate how to consume your meal. 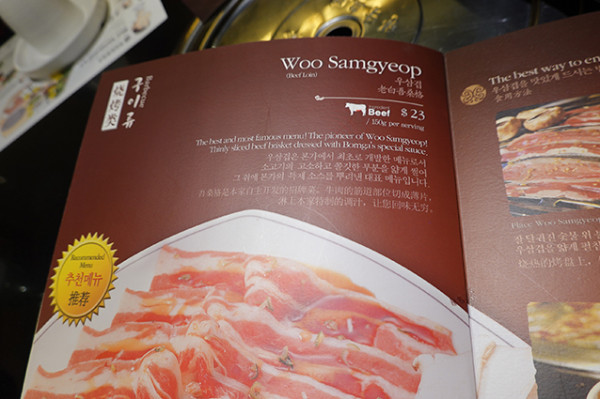 The famous Woo Samgyeop ($23/150g) explained both in the well-illustrated menu and on the paper place mats sitting under your bowl. 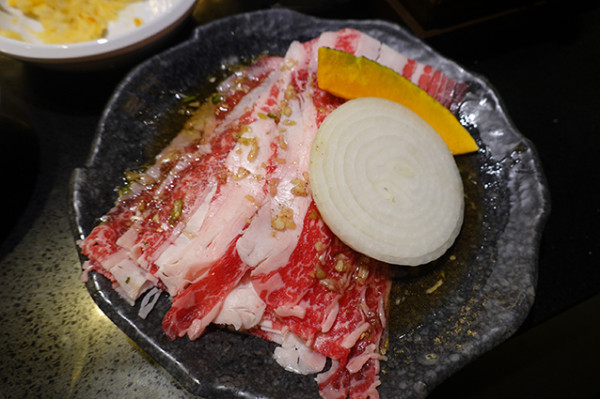 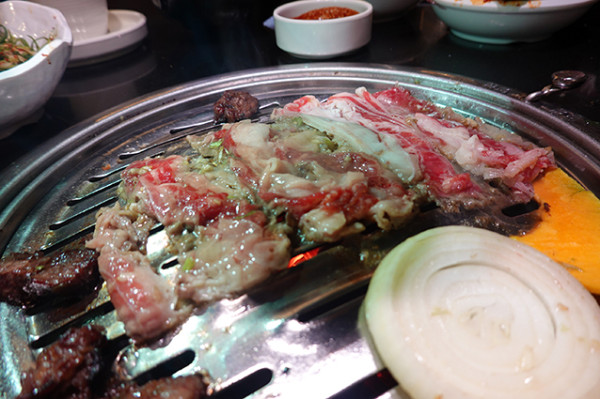 Your server will place it on the grill plate sitting over your hot coals, and then it's up to you to keep an eye on it - it cooks very quickly. 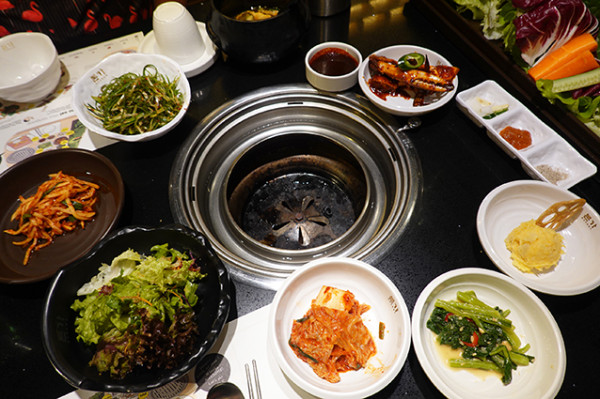 It's accompanied by banchan (side dishes) and a row of raw vegetables that look so delightful when they land, you instantly feel like you’re doing something good for your body just by eating here. 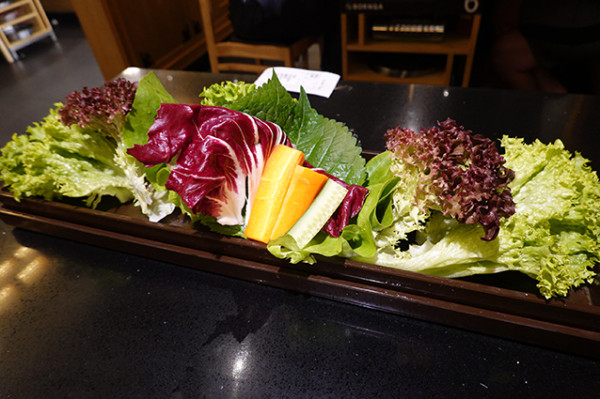 The leaves are for wrapping up your barbequed meats. My big Bornga learning was finding out layering different leaves together in the one ssam (lettuce wrap) is a thing - and they taste so much better this way too! 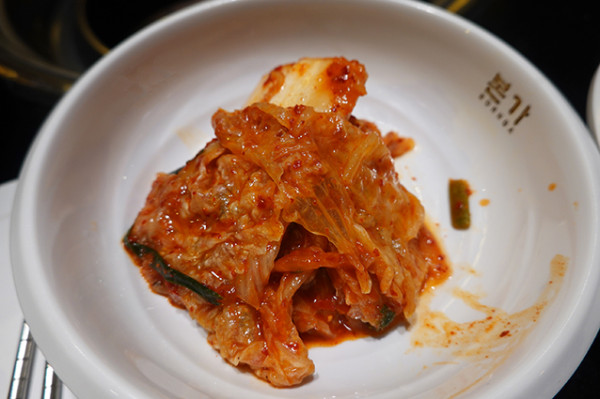 Don’t be afraid to ask your server for more kimchi! 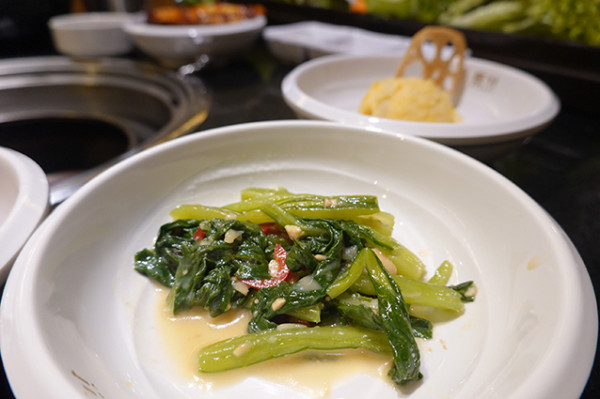 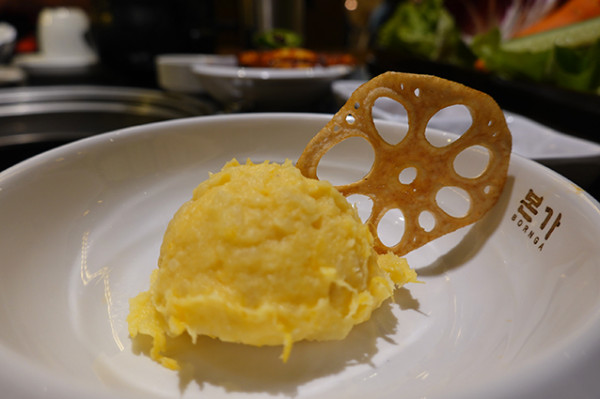 The side dishes, which include spicy radish salad, seasoned spincah and a sweet ball of mashed potato adorned with a lotus root chip, are all refillable for no extra charge. 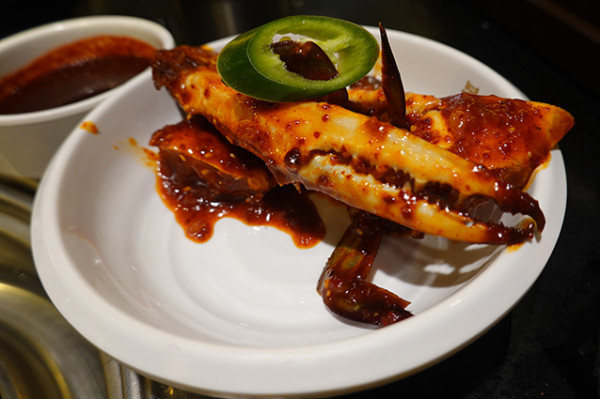 My highlight here was the spicy fermented crab (gejang). While originally designed as a way of preserving crab, today this popular Korean side dish is just lightly fermented. It's worth getting your hands dirty to try. 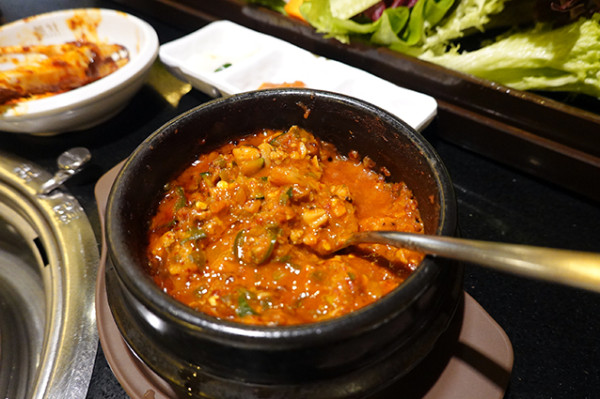 Also new to me was Haemul Ssamjang ($10) a fermented soy bean paste based pork and squid side that’s served alongside your ssam. While it looks like a thick stew, it is designed as a seasoned dipping sauce for your barbeque. 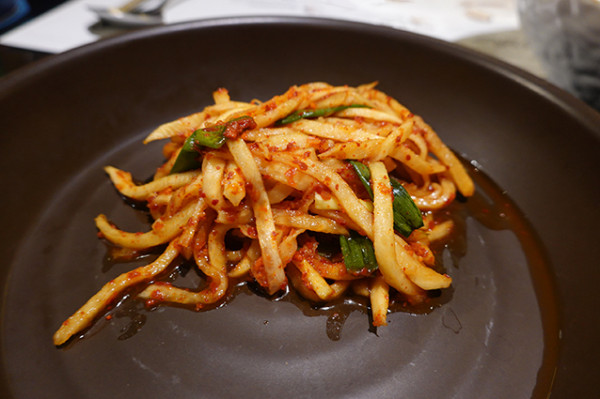 I found it easier to roll some up inside the lettuce wrap itself but wasn’t all that swayed by the muddy flavour it imparted to my wrap. I think I'll stick to kimchi and spicy radish in the future. 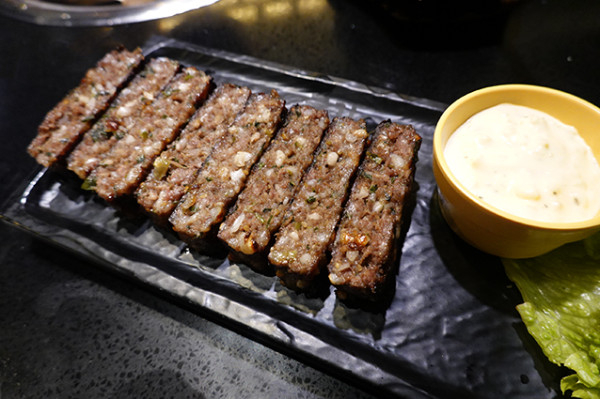 While Yesan Tteokgalbi ($23) struck me as fusion - a Korean take on the rissole, substituting in tteok (Korean rice cakes) for the stale bread ends your Mum might have thrown in - it’s actually a royal court dish. Originally called hyo-galbi it was considered an elder-friendly dish that made rib meat easier to bite off. The rice cake-shaped patties (they don’t all contain actual rice cakes like this version) were often attached back onto the short rib bone before cooking to impart some cook-on-the-bone flavour, and to make the presentation fit for a king. They’re grilled and kind of compelling as a side hustle to your main job: barbeque. 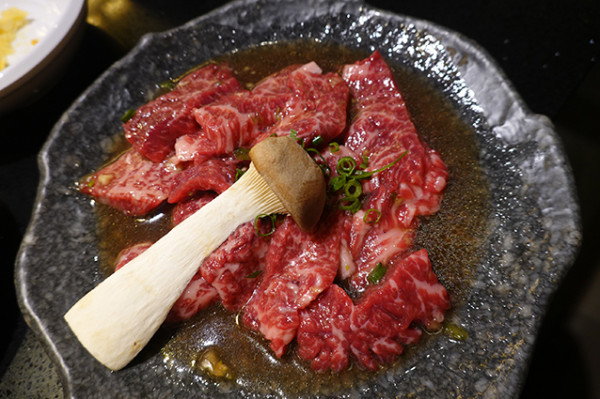 Wagyu Yangnyeom Kkotsal ($34/160g) helped redirect our attention to the smoking grill plate with beef short rib taken off the bone and marinated in another Bornga secret. 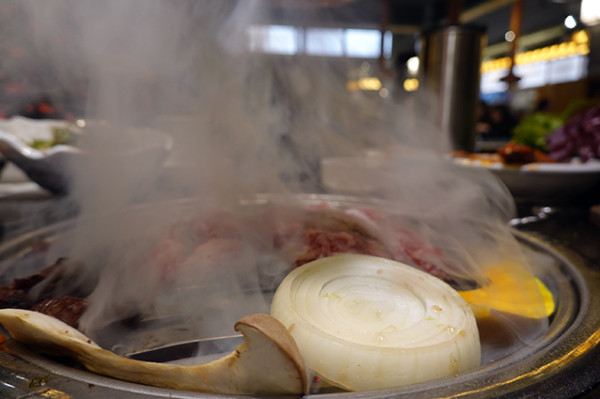 Extraction fans are quite effective here, and floor staff are quick to jump to fix anyone creating too much smoky atmosphere in the place. 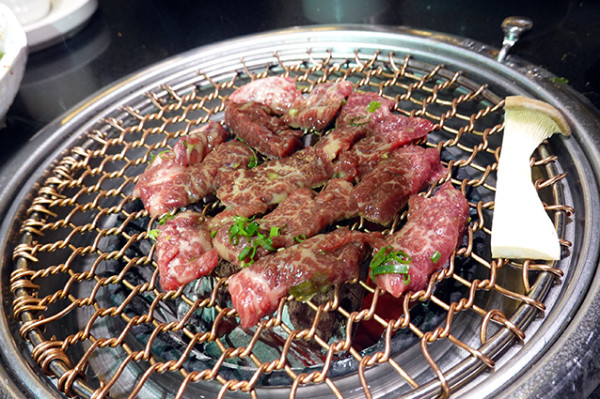 While everyone’s friendly, and the food here is good, I can’t help but compare this night full of endless shrieking toasts as youthful Korean groups around us got messy on soju, with my recent Jang Ta Bal experiences. It’s my view that Jang Ta Bal give better service and more high-end beef for your buck, rather than paying for Bornga's fancier fit out, more extensive menu and er... livelier atmosphere.