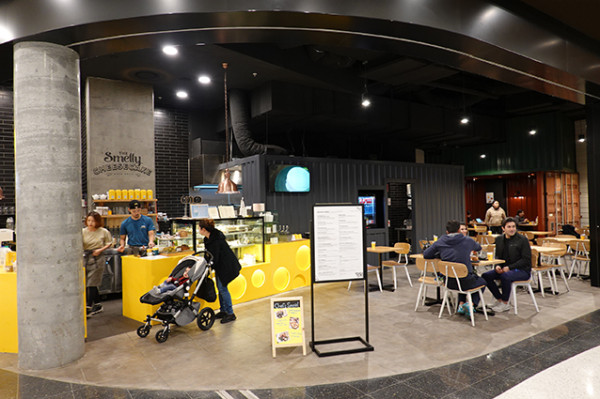 The Smelly Cheesecake’s Honey Gorgonzola Cheesecake ($7/slice) has been on my must-try list for years. Kicking off with a store in Lidcombe in 2014, it was the small chain’s expansion into Marina Square Wentworth Point that finally afforded me the opportunity to do so. 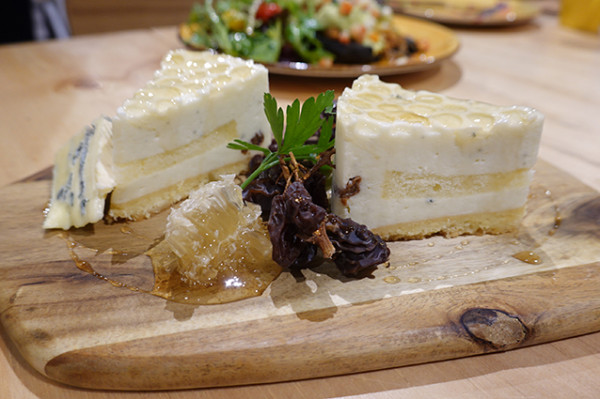 Fittingly, this cheesecake, made using pungent blue cheese gentled down to something quite approachable, is my favourite across a wide sample of their menu. 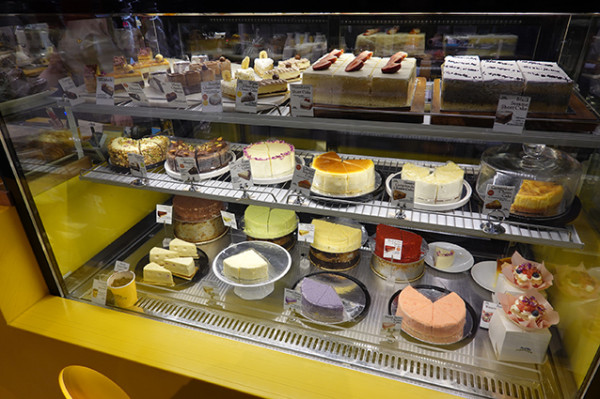 While Korean-run, this business seems draw influence from Japanese cheesecake, which is lighter and fluffier than the American cream cheese-based cheesecakes that up until now, have tended to dominate this field. 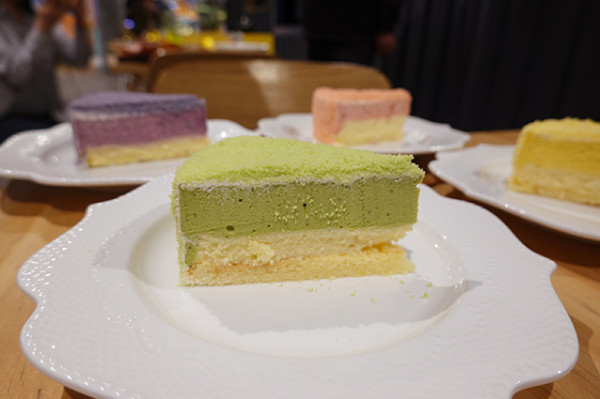 Faced with a pastel rainbow of cheesecake options, running from matcha to mango to mixed berry, my favourites proved to be the simpler flavours, like the Original Cheesecake ($7/slice) where it was more possible to taste the mascarpone and Parmesan cheese. 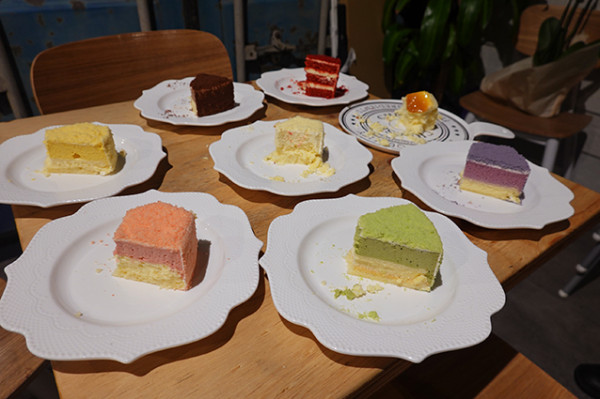 The integration of chiffon cake keeps everything fluffy and ephemeral. 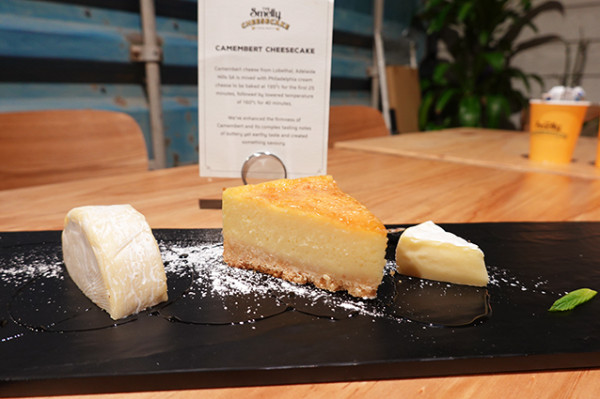 While the baked Camembert Cheesecake ($7/slice) is exactly what it purports to be – a baked cheesecake made using very mild Camembert cheese from Lobethal in the Adelaide Hills, the Berry Jerry Cake ($7/slice) was a bit of a surprise. 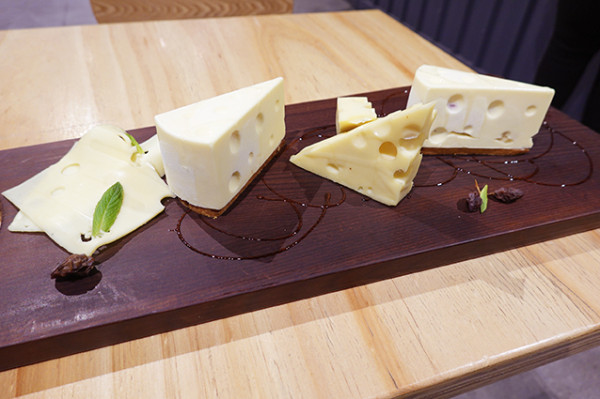 Made to look like a wedge of Swiss cheese it’s actually 98% mascarpone cheese with a frozen layer of strawberry jam that my palate really wasn’t expecting. Can’t say I loved this one… 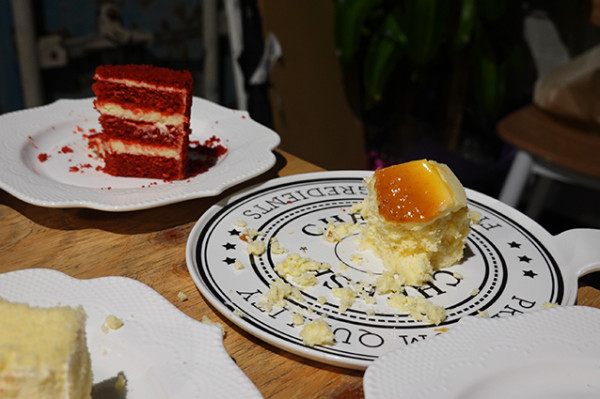 However, there was plenty I did love, including the contrasting cream cheese layers in the Red Velvet Cheesecake ($7/slice) and the Japanese-style Cheese Souffle Cake ($6.50/slice) that's baked in a steam bath to create the perfect - almost chalky - texture under an attractive golden brown skin. 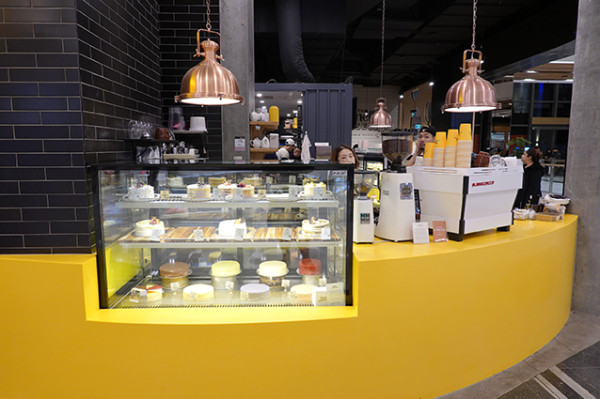 After the Gorgonzola cheesecake of course, those two were my real standouts, though there's a tonne to explore here. 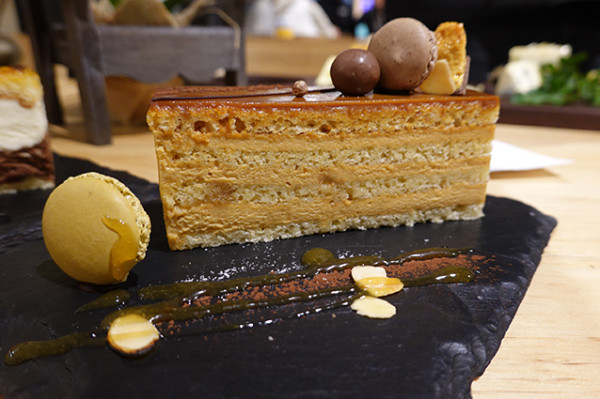 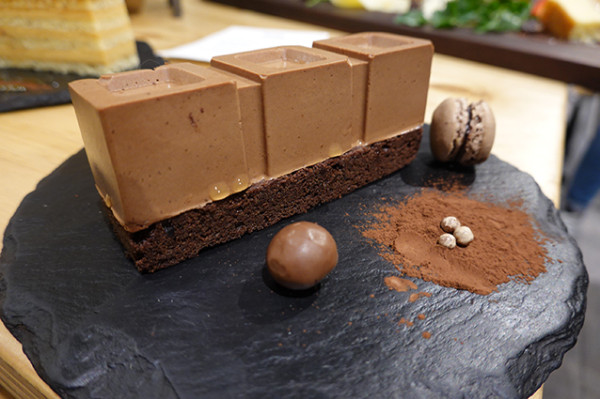 I've earmarked the well presented individual slices for next time. Arriving on slate boards, they run from caramel cheesecake to chocolate cheesecake presented as a Mega Chocolate Block ($7.80), with mini macaron garnishes. 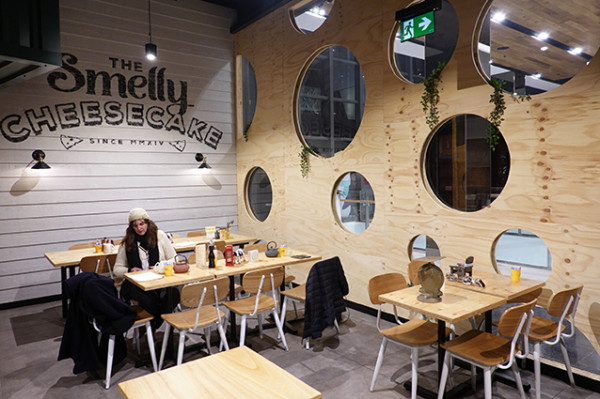 While the whole store has a bit of a Swiss cheese theme, with a bright golden cheese counter and circular windows cut into plywood walls, they are actually much more than just a cheesecake shop. 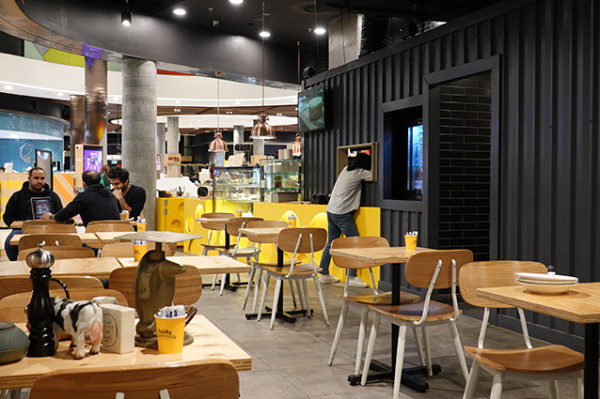 From the shipping container kitchen, they produce a credible café menu that’ll take you from breakfast all the way to a garlic prawn oil pasta dinner. 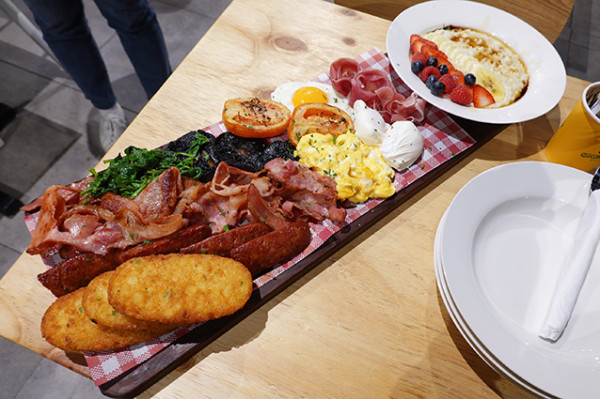 I stuck to the start-of-day stuff with a bountiful Breakfast Platter made unique by throwing a bowl of porridge in with all the more usual breakfast fixings – eggs three different ways, hash browns, bacon, baked beans, chorizo, prosciutto, mushrooms, fried tomatoes and spinach. The generous serve of quite tasty bacon was this platter’s standout. 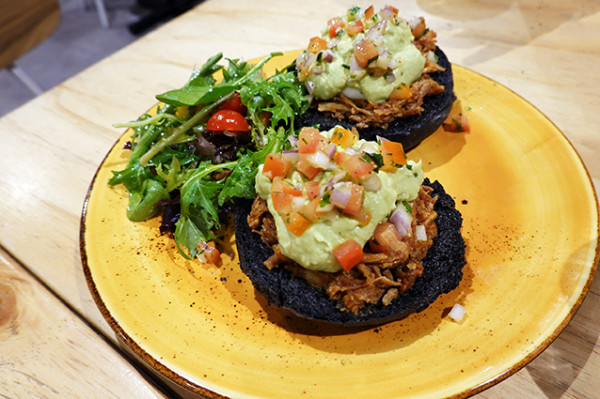 While I’m not so into the oozing avocado mousse replacing Hollandaise, I did like the pressure-cooked pork shoulder marinated in house-made barbeque sauce and presented on a charcoal bun in the Pulled Pork Benedict ($22). 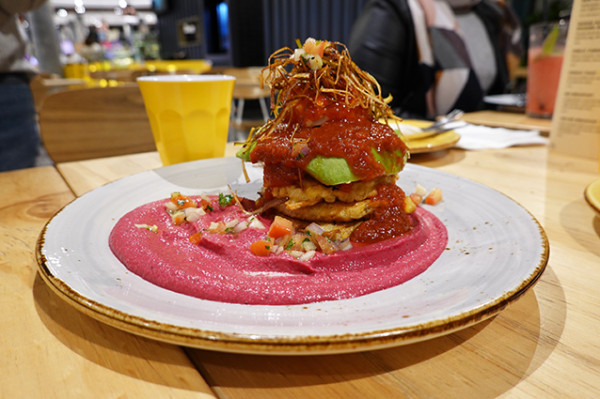 A lake of beetroot hummus makes the Sweet Corn Fritters ($16) very pretty to look at, and the dish certainly has good height, but if you ask me, this spot is really about the cheesecake. 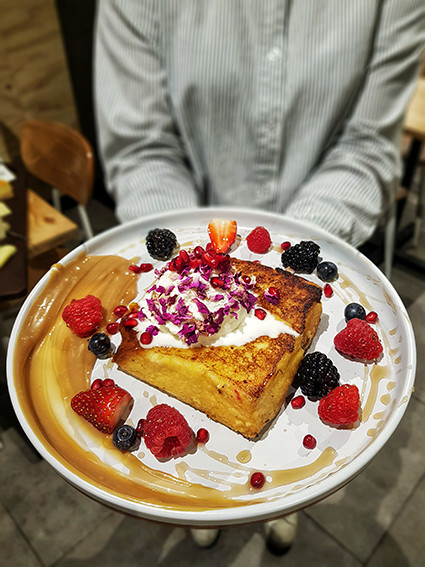 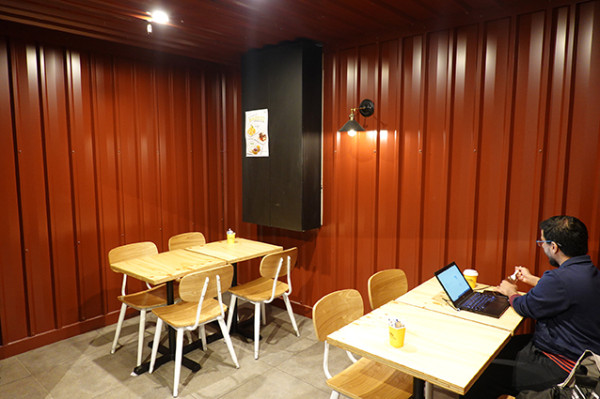 The only exception to this rule is the French Toast ($17) with caramelised condensed milk, fresh berries, maple syrup and vanilla gelato is ridiculously good. It transported me straight back to childhood and memories of my grandma’s bread and butter pudding, when I closed my eyes and simply let it dissolve in my mouth. 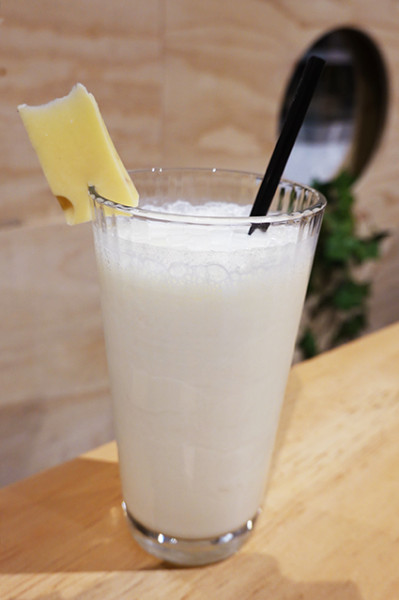 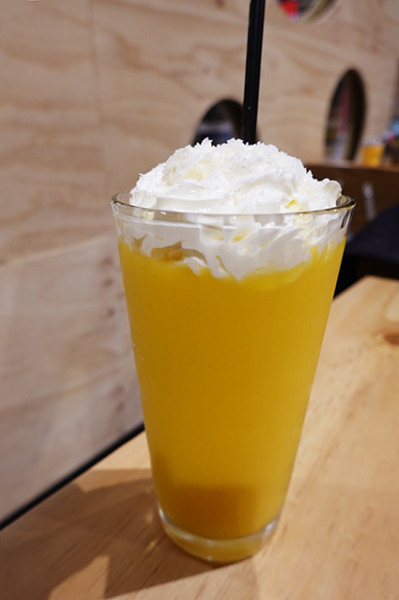 Proving my stick-to-the-cheese rule rather nicely, the Cheese Gelato Shake ($7) is the better of the two drinks I tried, though it definitely could do with more cheese. Presented like a frothy glass of bedtime milk, it’s appropriately garnished with a super-cute nub of cheese. I was less enamoured with the Mango Coconut ($7) because I was expected an icy fruit drink and it came with a big hat of whipped cream dusted with desiccated coconut, so wasn’t as refreshing as I’d hoped for. 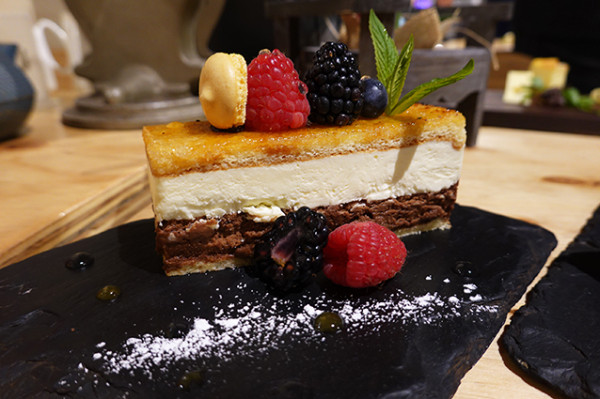 The Smelly Cheesecake are on an expansion juggernaut, so if you’re keen to give the gorgonzola cheesecake a go and Wentworth Point is difficult to get to, keep your eyes peeled for upcoming stores in Charlestown, Rouse Hill, North Rocks and on Bathurst Street in the CBD.