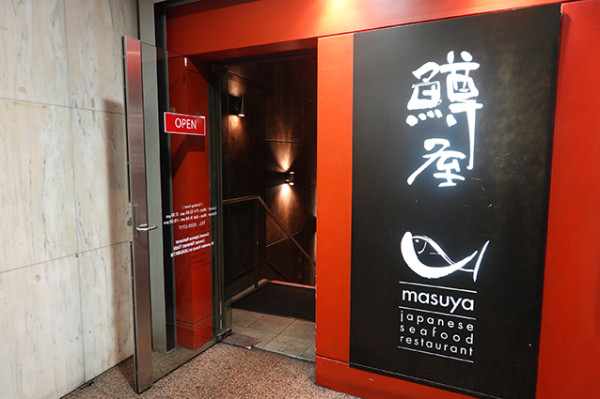 Masuya Japanese Seafood Restaurant had been on my list for as long as I’ve known David Wasserman, the head honcho at Wasamedia, Sydney’s most well-known restaurant public relations agency. He liked their sushi so much, he was loath to tell me where he ate it, lest I write about it and ruin it. That was probably a decade ago, and Masuya is still going strong, racking up more than twenty years in fact. As I was able to walk in and get a Saturday night stool at the sushi counter without reserving one, I’ve decided to write about it. Sorry David. 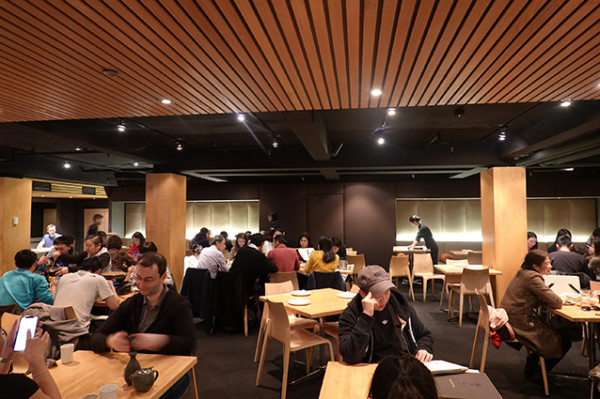 While the restaurant is below street level, the Masuya team have made the most of the basement setting using a theatrical blackout with wood panelling that pulls your attention away from the exposed fittings. 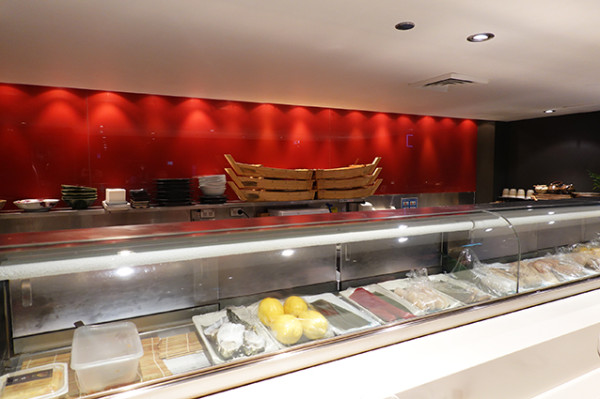 The sushi bar is well-lit, with a long temperature-controlled cabinet displaying a beautifully prepared daily selection of fishes, clams, omelette, deep-cupped Pacific oysters and uni. Behind it, a flotilla of wooden sushi boats idle along a gleaming red wall, waiting to be pulled into service. 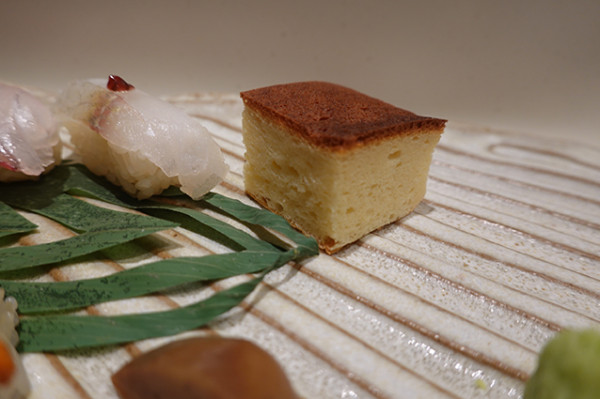 While sushi master Toshihiko Oe is the restaurant’s star attraction, he was out of the kitchen on the night I dined. Seeing Rio Chun Man Lau’s smiling face over the (frankly too high) sushi counter meant this wasn’t a disappointment. Lau has made many a Surry Hills work day great for me with his work at his sister’s restaurant, Gou Sushi, just around the corner from my office. Despite formerly owning his own Cabramatta sushi outlet, Lau is working here to learn the art of tamago from Mr. Oe. Made using fish paste, it’s the best version of this fluffy omelette I’ve ever tried, because it’s light and springy like a sponge cake, without excessive sweetness. 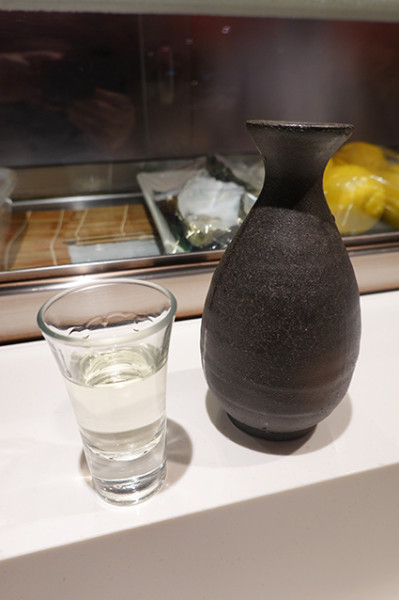 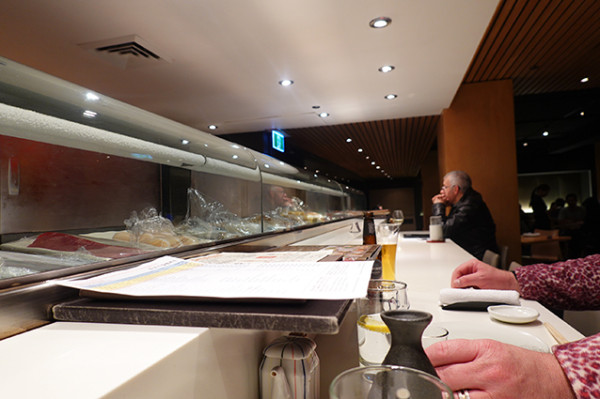 With Masuya’s daily fish list taking up a full printed page, there’s more sashimi and nigiri sushi than you can easily eat in one setting. Instead of deciding, we left ourselves in Lau’s hands and instead got stuck into some sake. The Masuizumi Junmai Daiginjo ($67/250ml) comes from one of just 12,000 bottles brewed each year and offered exclusively to Tetsuya’s and Masuya here in Sydney. It’s both perky and soft in equal measure, with a coconut oil-like richness and sweetness that charms your palate before it dries up. 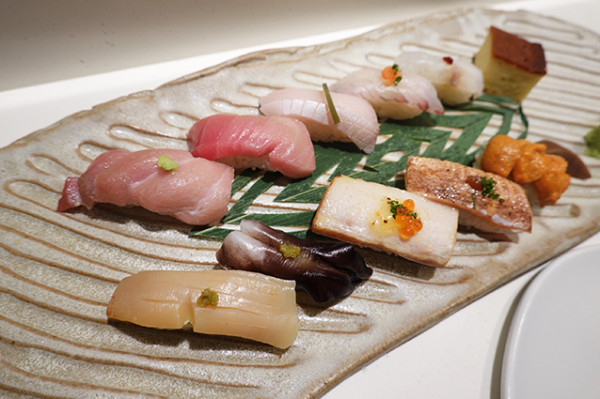 Northern Bluefin Tuna OToro ($13.80/piece) is a frozen Spanish import that’s got nice flavour but slightly worse bite than the locally caught Wild Southern Bluefin Tuna Chutoro ($9.80/piece) that, as a result eats better. Topped with radish, the Queensland farmed Barramundi ($3.80/piece) is delicate and savoury, and not a fish I see very often so I’m excited by it, while my dining companion, who grew up catching Wollongong Whiting ($4/piece), finds the latter more to his taste under a plum garnish. There are two Japanese clams on the menu, the darker coloured Torigai Shellfish ($6/piece) sometimes called the heart clam, and the paler Mirugai Clam ($7.30/piece), that is also referred to as the Pacific geoduck. I preferred the geoduck for its savoury flavour and almost crunchy texture over the softer mirugai clam, with both pieces garnished with yuzu koshu. 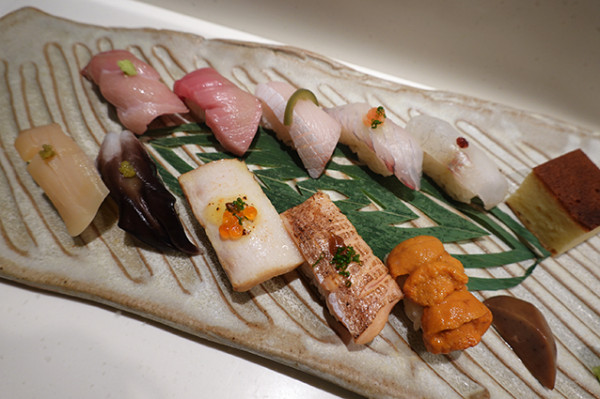 In a trademark move, Lau garnishes my Queensland Swordfish Belly Aburi ($5.30) with garlic butter and bursting pearls of salmon roe. It might not be traditional, but it perfectly accentuates the meaty muscular qualities of this steak-like fish, its fattiness offset by a gentle kiss from the blowtorch. Lau also gives me the opportunity to try john dory liver marinated in mirin soy and sake. It’s usually served as a double-layer piece with the flesh of the john dory fish, and it's enjoyable to eat, with the usual metallic flavour of liver neatly covered by the marination. 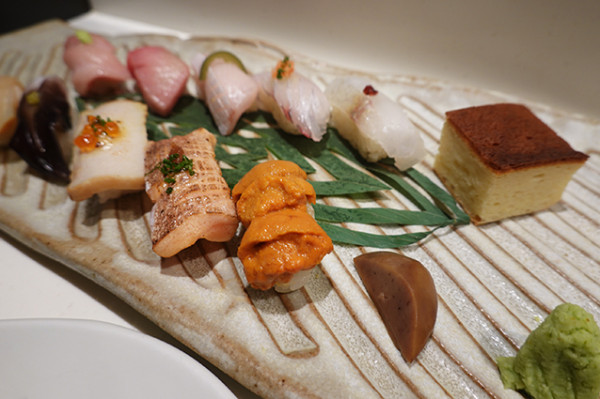 My biggest discovery was the glistening bright orange Sea Urchin Roe ($9.80/piece) imported from Hokkaido, the second largest island of Japan. While Lau finds it too sweet, I was in love with the gentle balanced flavour and vivid orange colour, particularly against the Akita Otome sushi rice, cooked here with a splash of apple cider vinegar. 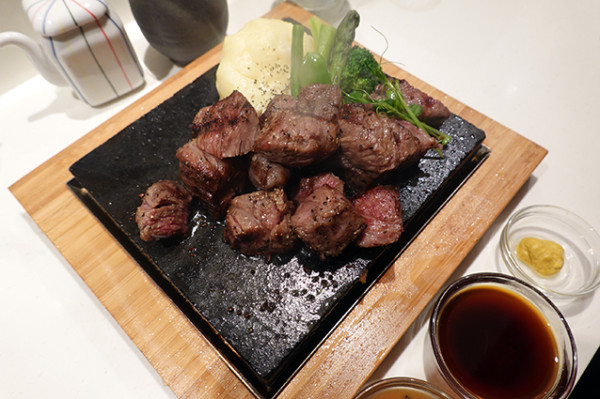 We moved on to the Senjo ‘Kinmonnishiki’ Junmai Ginjo Sake ($40/250ml) about half way through our nigiri journey. It’s prettier than our first sake, with less rich oiliness. Steered onto Ohmi Wagyu by Lau, we opt for the Ohmi Wagyu Diced Steak ($88.80/250gram). This is one of Japan’s top three wagyu producers, and while Kobe Beef might be the best known here, Ohmi has the longest history raising Japanese black cattle in the Shiga Prefecture. It arrives on a very hot plate, already cooked enough if you like your meat rare, with great exterior caramelisation, and enough heat in the black stone to cook it to well-done if that's what you prefer eating. 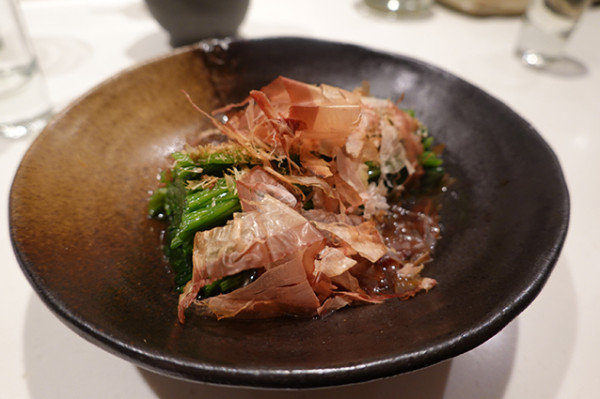 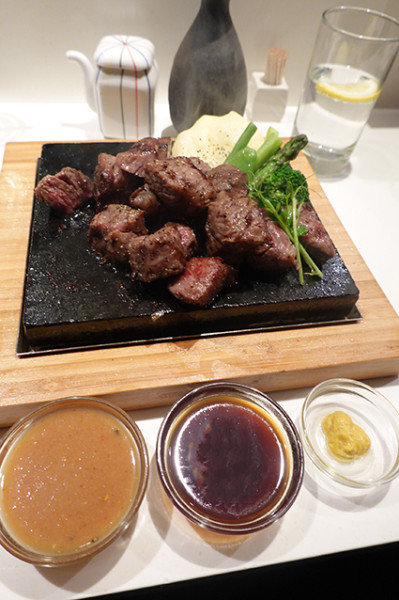 While pricy, it’s delicious, whether eaten alone, or dragged through one of three accompanying dipping sauces (miso, teriyaki or mustard). We throw in a couple of vegetable sides to make main out of it. Ohitashi Spinach ($9.80) is neatly chopped for ease of eating, topped with freshly shaved bonito flakes that are much more pleasant than the pre-shaved ones. 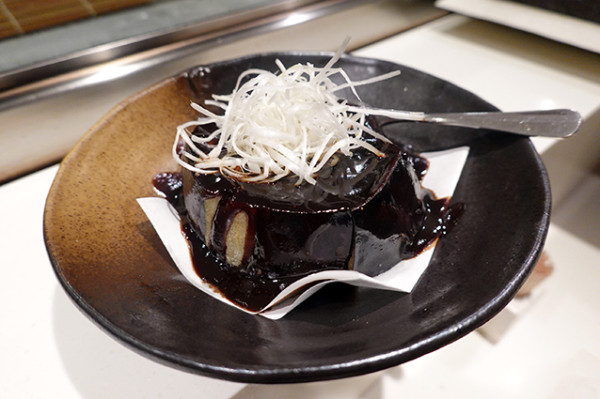 Nasu Miso ($8.80/regular) will remind you why you fell in love with miso eggplant in the first place, with soft unctuous pieces again sliced with easy eating in mind. Service at Masuya is friendly and attentive, with every single floor staff member bidding us a cheery farewell as we departed into the night.