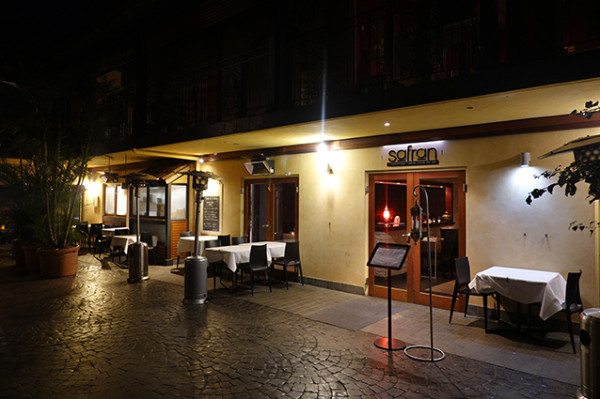 Safran is located within one of the quirkiest shopping, eating and entertainment complexes I’ve ever encountered… well it would have been, if I hadn’t got married in Las Vegas. 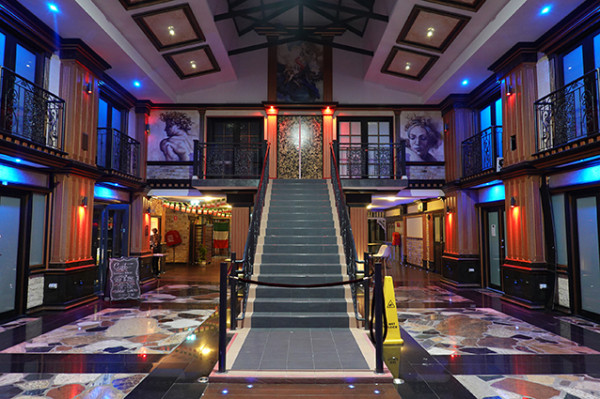 Galleria Ettalong Beach is like The Strand Arcade on steroids, crossed with all the artifice of The Venetian hotel on the Las Vegas Strip. 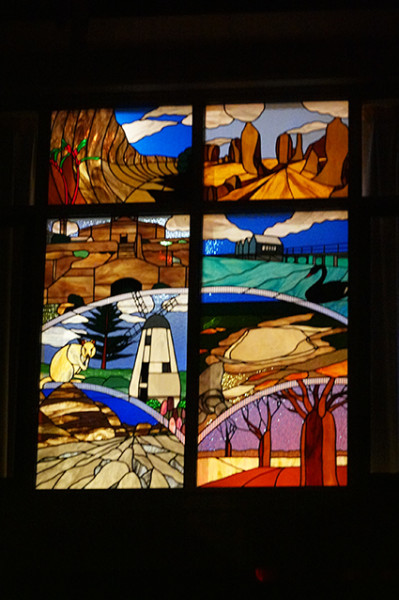 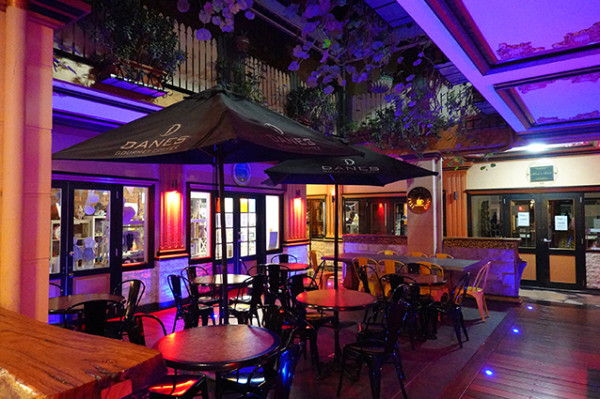 Designed to look like a fake Italian village, it’s a crazy collection of nooks and crannies, stained glass windows and cobblestones, piazzas and Juliet balconies. 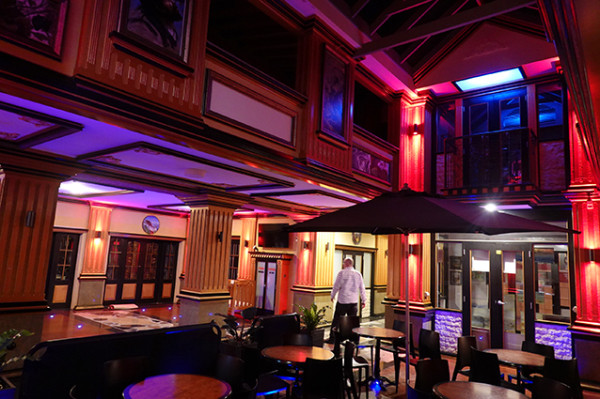 It houses a motel, some private residences, an artisan market with permanent stalls that open on Saturdays and Sundays, a cinema, cafes, restaurants, bars, boutiques and even a Sicilian bakery. 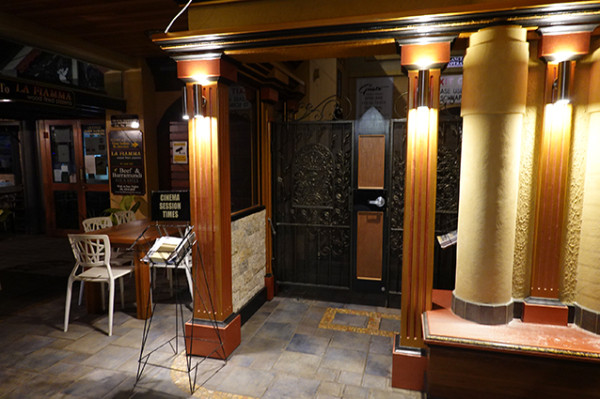 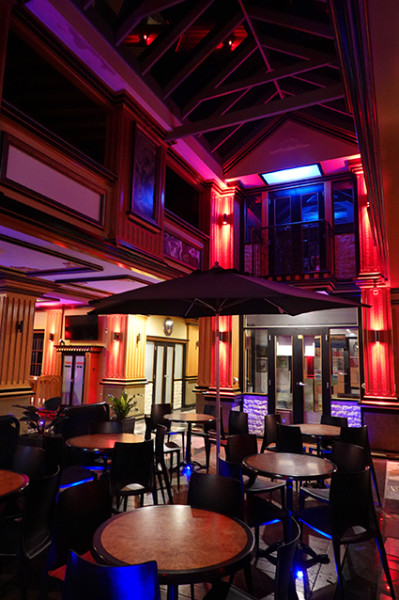 While the complex was first established in 1979, Cinema Paradiso was added in 1999. The six-screen cinema’s name is drawn, rather appropriately, from the academy award-winning 1988 Italian film by the same title. You might remember it for its lush musical score composed by Ennio Morricone. 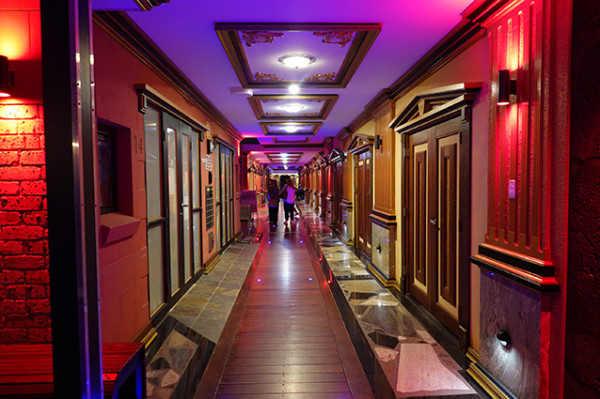 As you stroll the complex’s long marble corridors, with lights that turn on as you move through each area, you might – as I did – ask how and why this complex came to be established in a sleepy Central Coast locale like Ettalong Beach? 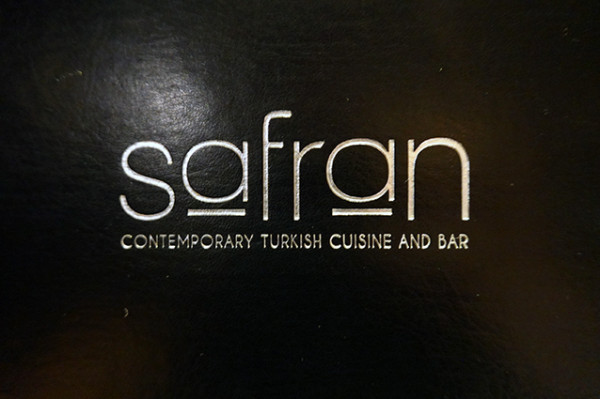 Indeed, Safran may have you asking very similar questions. This contemporary Turkish restaurant puts out dishes that could easily stand beside those produced at Efendy, Anason and Stanbuli, which is not to say it’s a direct copy of Sydney’s modern Turkish standouts. 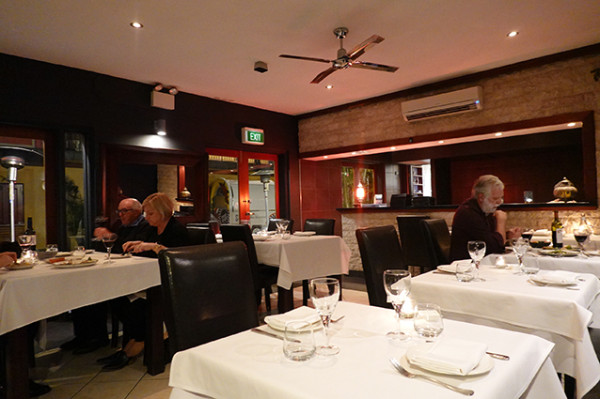 Chef Suleyman (Sulo) Kirbancioglu cuts his own path between Turkish dishes and flavours plucked from his childhood in Mengen by the Black Sea, French techniques and premium quality Australian ingredients. 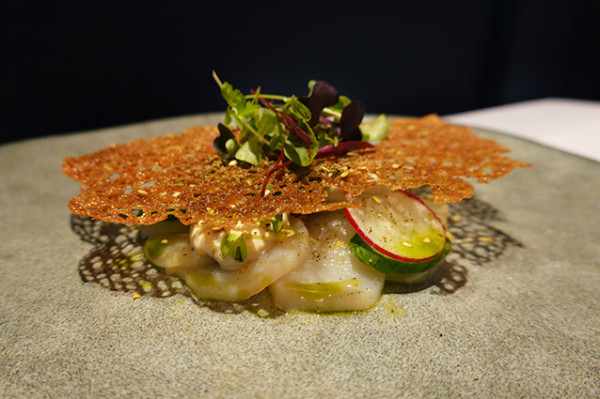 All these elements come together beautifully in Scallops ($18). The delicate bivalves are thinly sliced and lightly smoked in linden tea, made from flowers that grew everywhere in the village where Sulo grew up. They’re topped with a mackerel and tahini mousse that summons both land and sea, then crowned with an eye-catching herb tuile. Micro herbs and thinly sliced radishes complete this dish, which is totally unique in flavour. 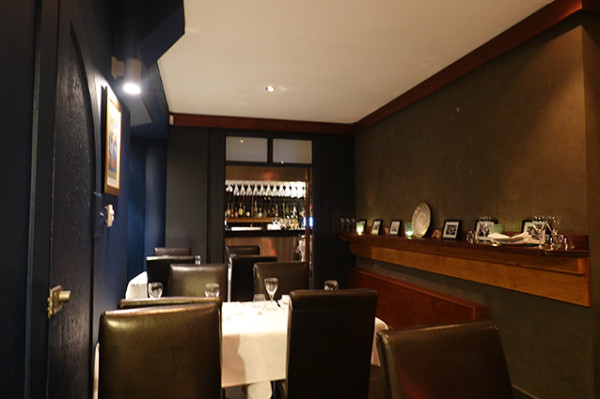 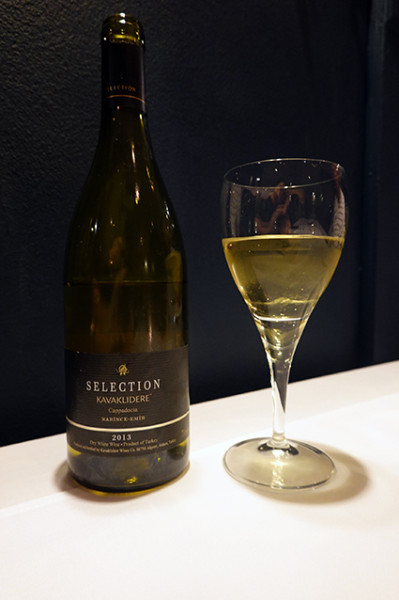 Taking in the photos from the chef’s village that line a mantelpiece down one side of the dark toned dining room, we spend some time getting acquainted with our chosen wine. The 2013 Kavaklidere Selection ($68) is a blend of Narince and Emir – two of Turkey’s native white grapes. With lemon and almost salty minerality, it’s a medium weight wine that reminds me of the sea. 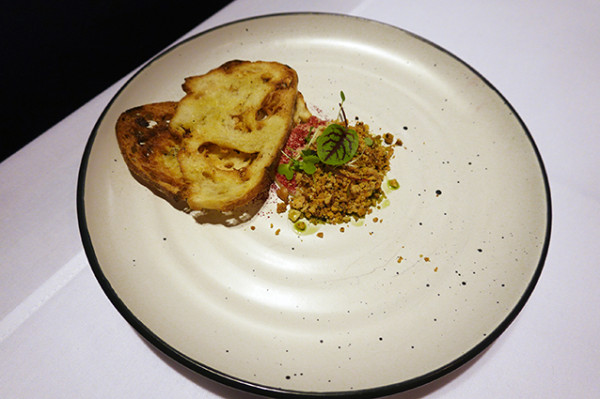 It’s the perfect foil for Uykuluk ($16) - veal sweetbreads braised with leek in the same Narince white wine then aerated through a syphon and topped with hazelnut crumb and confit garlic croutons. It eats like a Turkish response to foie gras. 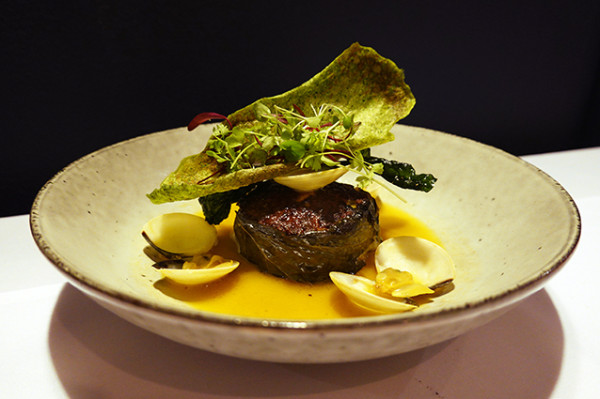 The citrus and minerality of the wine will also suit the Prawn Kofte ($18) that arrives with tiny clams in a salty lake of leek and fennel broth under a curved green raki rice crisp. The kofte itself has a spongy, almost boudin blanc-like texture, before being wrapped in a grape leaf and charred. 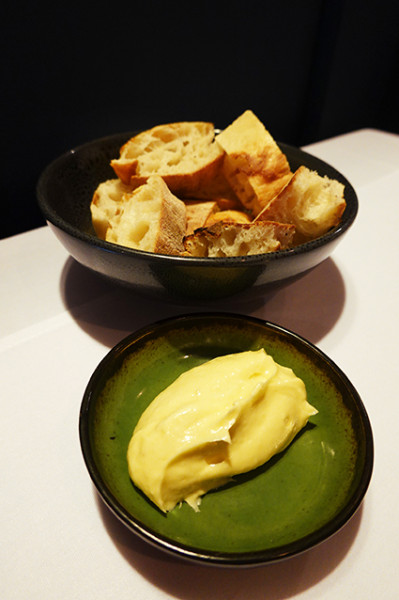 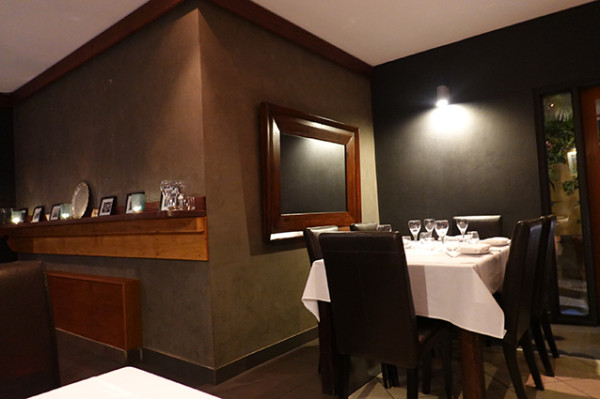 Scoop up the broth with Ekmek ($6) - house-made warm Turkish bread cubes served with confit garlic butter that’s slightly too raw and intense for me. 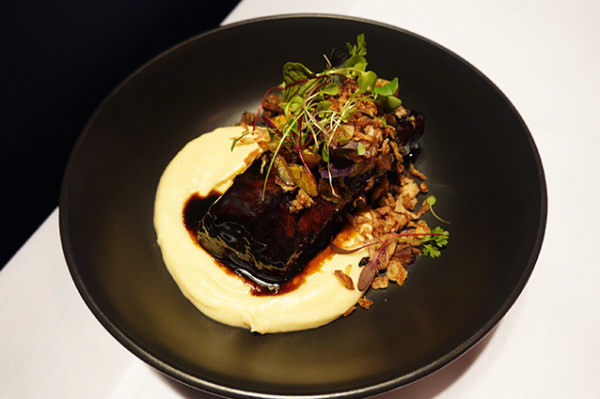 As you proceed down the shared meze menu dishes get bigger. The Beef Rib ($36), made using Cape Byron Angus beef, is smoky and tender. The glistening glaze employs mulberries, which cleverly avoid being too sweet. It’s served with a creamy cauliflower puree and a crumble of chestnut, fried shallots, Parmesan and coriander. 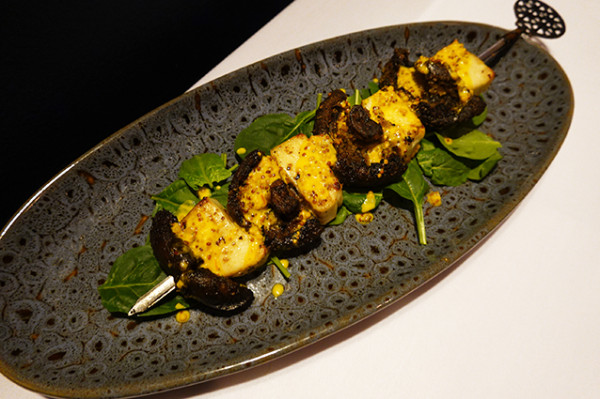 We team it with Hellim ($16) – one of the few vegetable-based dishes on offer. It’s a simple skewer cooked over charcoal, with haloumi and Baharat-spiced mushrooms that impress with paprika, cumin, pepper, coriander, cinnamon, nutmeg, cardamom and cloves. It’s drizzled with a mustard and saffron beurre blanc that eats well in combination with the mushrooms, golden cheese and scattering of baby spinach leaves. 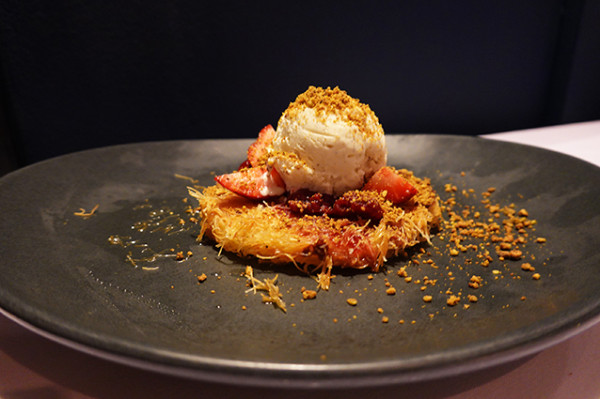 Friendly and personable floor staff recommend we order two dishes apiece, though I reckon you could slide in a fifth and still leave room for dessert. And you do want to leave room for dessert - the Kunefe ($14) attracts guests all the way from Sydney. It’s easy to see why: the sugar syrup soaked sweet cheese pastry is crunchy and light against a tart berry coulis and silky, rich ice cream. Scoop it up warm and depart Safran with a very big smile thinking about what you’ll try on your next visit.