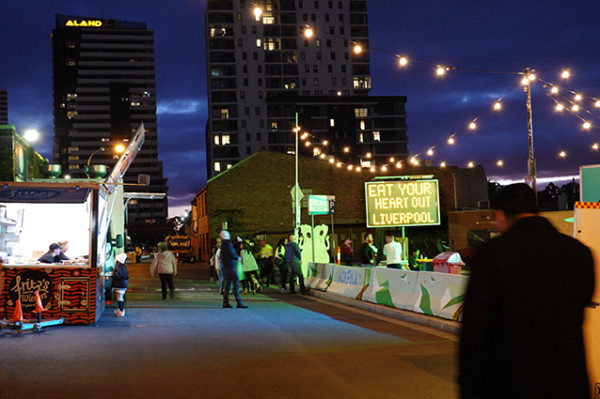 Festooned with lights, the Norfolk Serviceway in Liverpool looked more like Melbourne’s popular laneways than the serviceable car park it usually is. After a nuclear sunset – the skies seem bigger out here – the sky darkened to midnight blue, highlighting the area’s new residential towers. 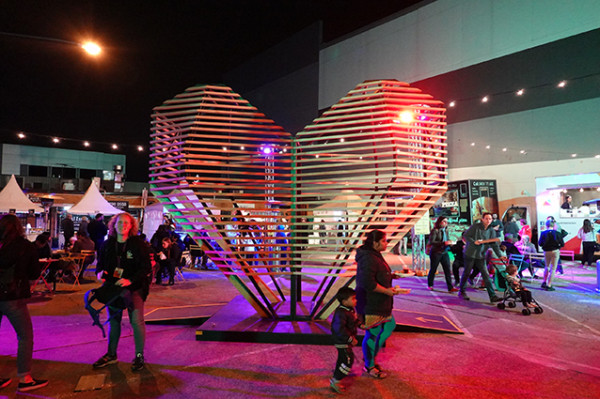 Their presence made a perfect backdrop for Eat Your Heart Out Liverpool, a festival designed to showcase the offerings of the suburb’s rapidly developing CBD. 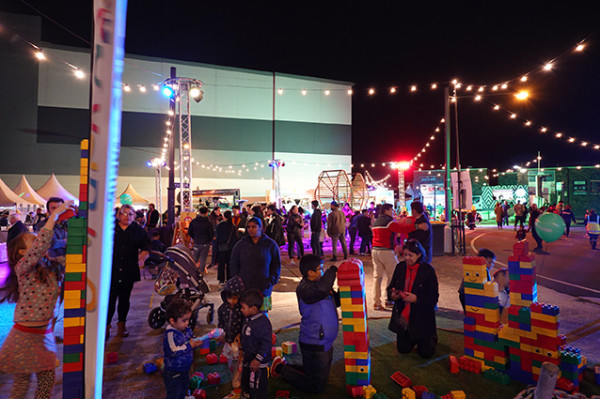 Mimicking the towers in front of them, children were kept entertained building soaring towers from colourful soft blocks. As with most Liverpool City Council events, it was an all-ages affair, with free activities provided for the young, old and everybody in between. 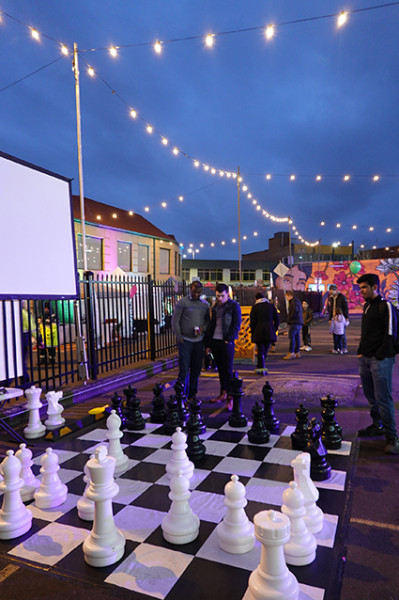 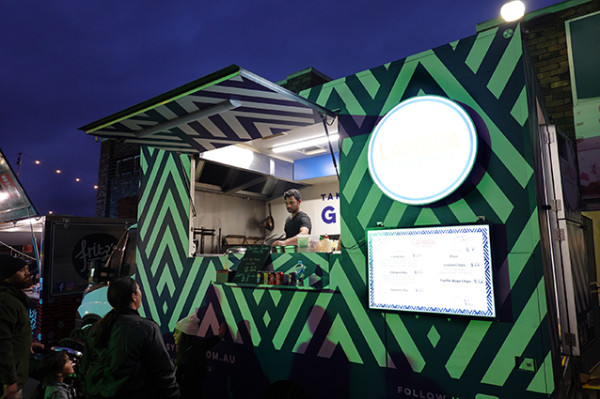 As I cruised the circled food trucks trying to decide upon dinner, the small but enthusiastic crowd played with oversized chess and checkers sets. 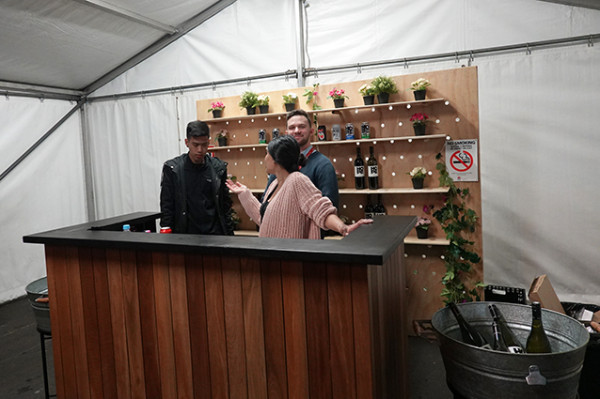 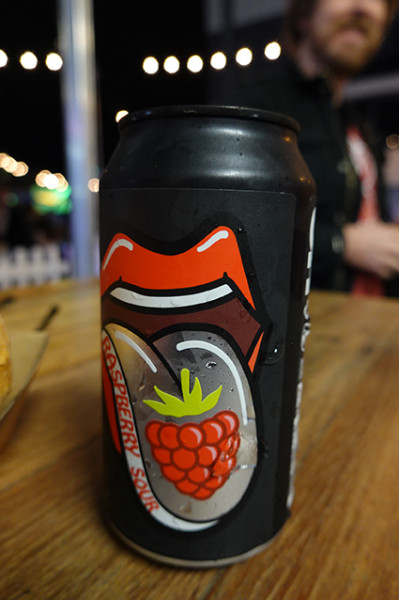 If you told me last year that I’d be sipping a well-balanced Lime Margarita ($7) and drinking an eye-catching craft beer sour in a street art-filled laneway in Liverpool, I’d probably have laughed. But there I was doing it, thanks to the good folk from Macquarie Hotel, a popular Liverpool watering hole. The cool can of Hope Brewery Raspberry Sour ($7) I was enjoying was brewed in the Hunter Valley. It was the perfect foil to a Beef Brisket Burger ($14) from Rangers Texan BBQ. 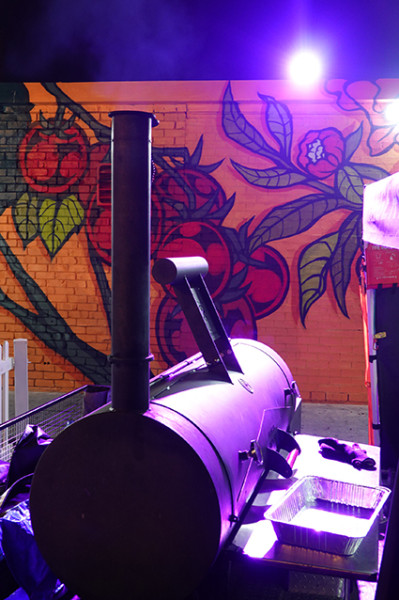 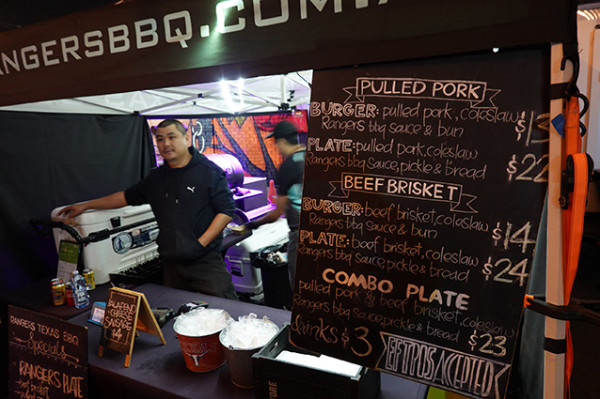 Conveniently located right by the bar, this professional market outlet had their big black smoker belching out some truly mouth-watering aromas of Texan-style barbeque, right in front of another piece of Liverpool’s funky street art. 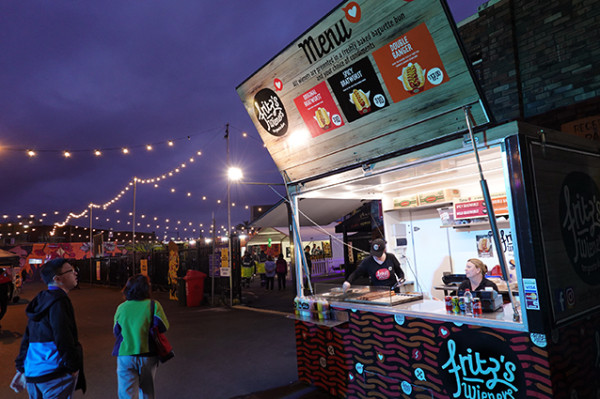 Not to be outdone, the women at Fritz’s Wieners lured in the eaters with rotating rows of fine, Germanic sausage. 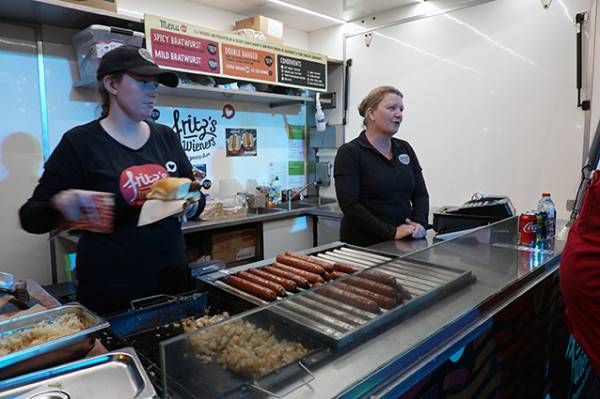 Sandwiched inside a freshly baked baguette bun, you could choose to take your sausage mild or spicy. 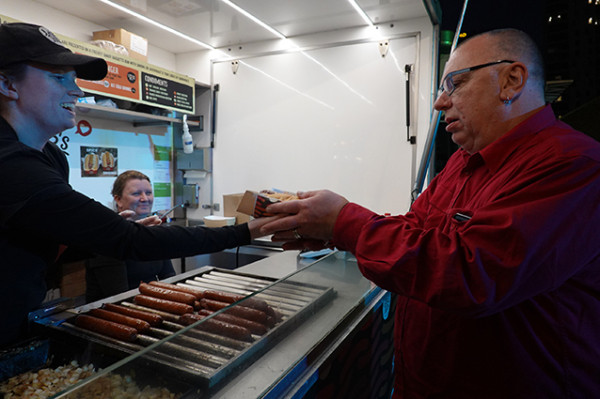 We chose the Spicy Bratwurst ($10) – a beef and pork sausage that has been hot smoked over manuka wood –
opting to top it with both sauerkraut and onions. Saucing is a self-service affair, done at the front of the food truck, with honey mustard scrubbing up well against the nicely spicy snag. 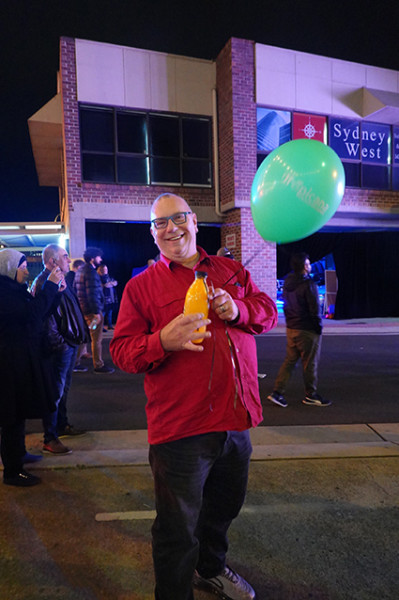 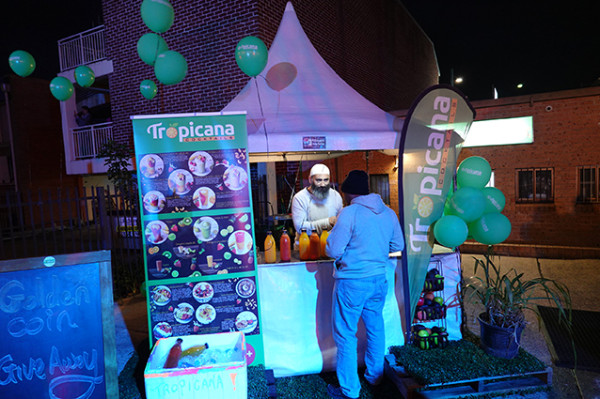 With big non-drinking components in Liverpool’s multicultural makeup, Lebanese juice bar, Tropicana Cocktails were on hand with fresh juices. Running on a gold-coin donation system at the festival, their impossibly large juices were tart and freshly squeezed. 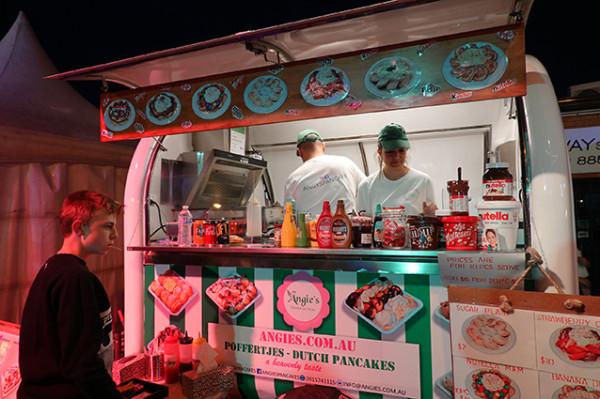 Here you’ll find poffertjes – tiny Dutch pancakes – sitting beside znoud el sett – Lebanese sweets whose name roughly translates to the ‘upper arm of the lady’ (a reference to their shape). 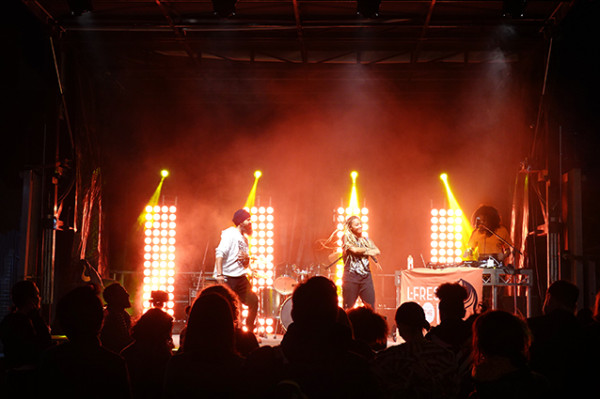 Entertainment follows the same principle. Clad in a turban and a sweat-shirt that pays homage to his home in the South West, L-Fresh The Lion busts out his latest song to the small but enthusiastic crowd. 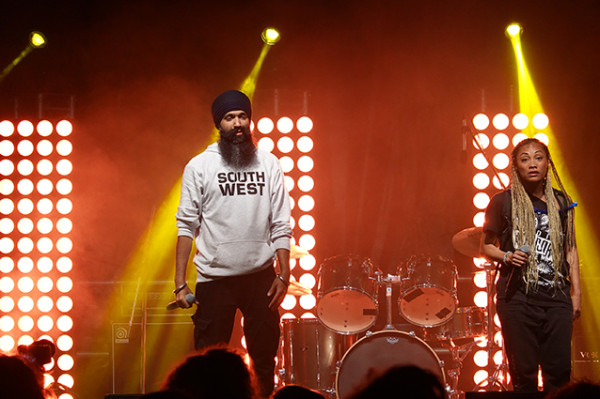 The song, Born to Stand Out, is about being confident in your own skin. 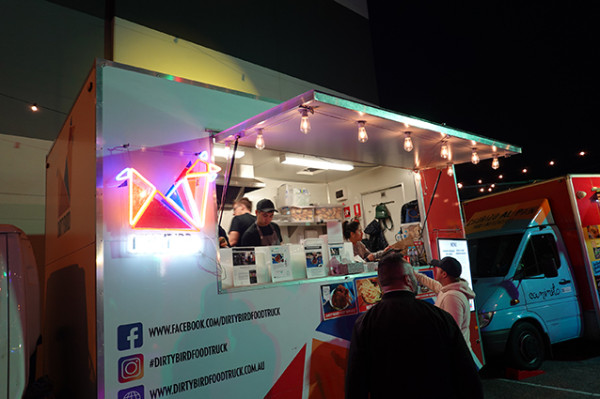 It’s nice to see artists like this one inspiring young people to feel pride in themselves and their postcode. 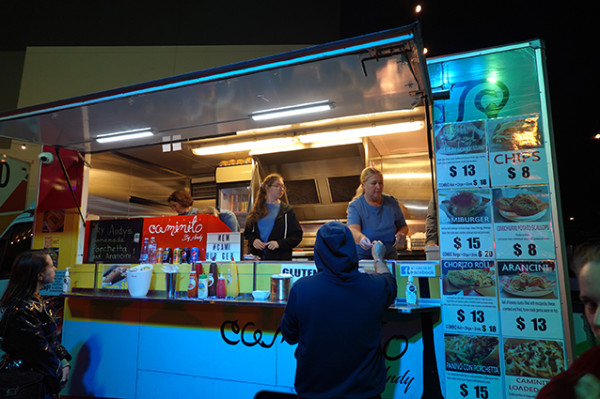 And if nothing else, Eat Your Heart Out Liverpool, aptly demonstrates that there's plenty to feel proud about within the confines of this diverse and upcoming local government area. 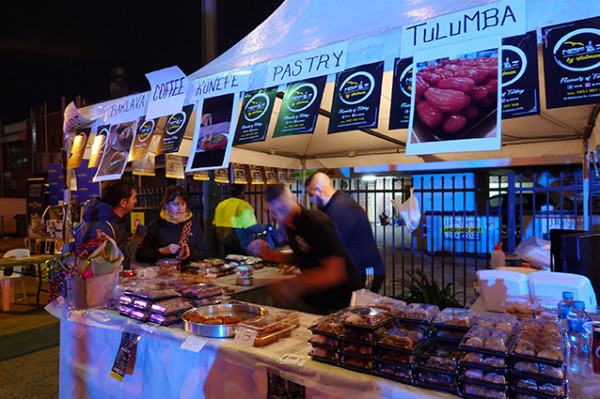 My final shout-out goes to the two polite and well-groomed young men from Nefiz by Salman who, by the side of the stage, fought valiantly to keep up with the demand for Kunefe ($8). Heating the Arabic sweet at the speed required for a hungry festival crowd proved too much for their portable equipment, so the ingenious young men were running back and forth ferrying warm filo pastry-crusted, sweet cheese from their bricks and mortar store. 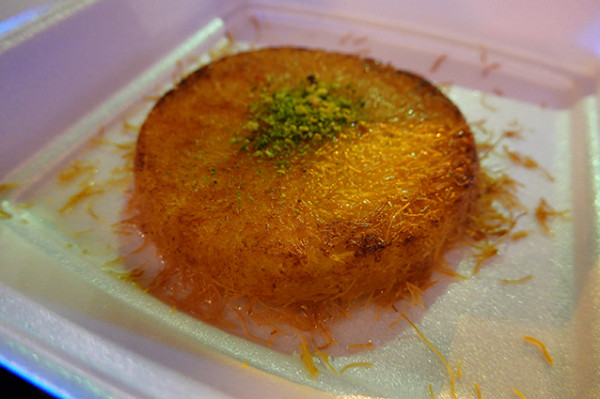 Nefiz by Salman is the brainchild of Berrin and Salman Genc, and has been open on Memorial Avenue for just a month. Their aim is to introduce the people of Liverpool to well-priced Turkish dishes like traditional burgers (kumru) and filled Turkish-style baked potatoes (kumpir), along with a range of pastries running from baklava to fried dough tulumba. If the kunefe I ate was anything to go by, just like the rest of Liverpool, they’re worthy of your attention.