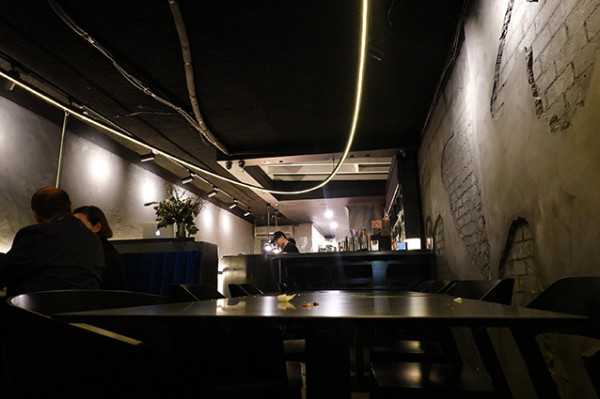 With an ellipse of yellow light looping overhead against theatrically blacked out fittings, distressed charcoal concrete walls with splats of exposed bricks, and a serpentine logo that summons caped crusaders, Soul Dining has an edgy, contemporary feel. 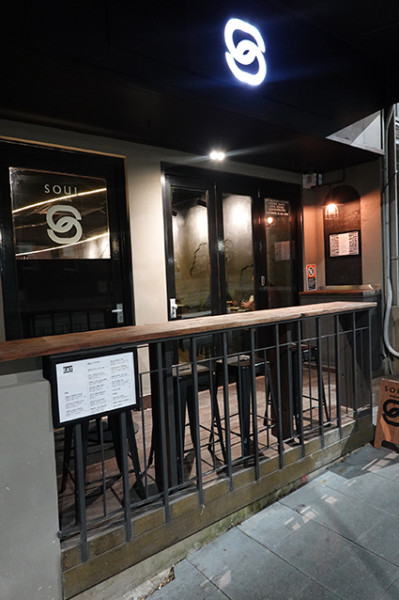 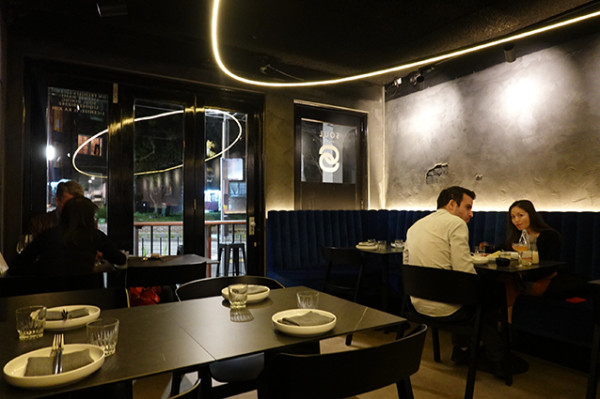 It’s a first restaurant for Illa Kim and Daero Lee, with a menu that reflects their both their Korean heritage and their personal pathways to Sydney, which included time in Germany for Kim, and time as head chef in an Italian restaurant (Criniti’s) for Lee. Explaining the origins of dishes, and their connection to Korean cuisine, causes their old friend and third partner in the business, Hyunchul Kim, to giggle to himself more than once. 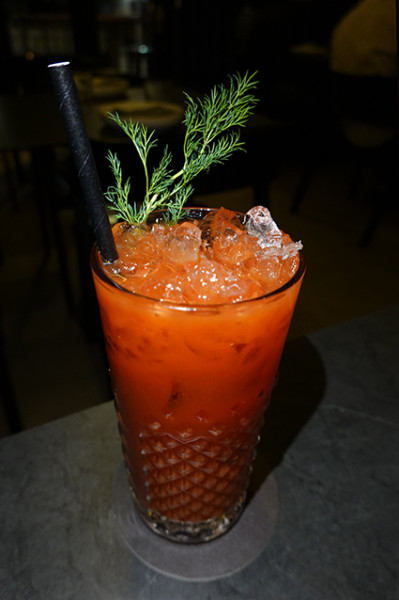 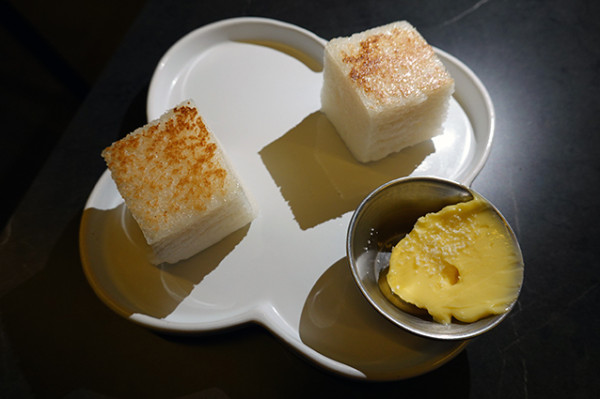 From the substantial back bar in the rear, I kick off with a kimchi-brine enhanced Bloody Mary ($20). It reminds me of the tomato and clam-broth based version of this cocktail, the (Bloody) Caesar, which emerged in Canada in 1969. Appropriately to the Italianate techniques used in this restaurant, the original cocktail was said to be based upon spaghetti alle vongole (spaghetti with tomato sauce and clams). I sip the tangy, dill-garnished drink against bread switched out for spongy rice cakes, lathered with salt sprinkled butter. 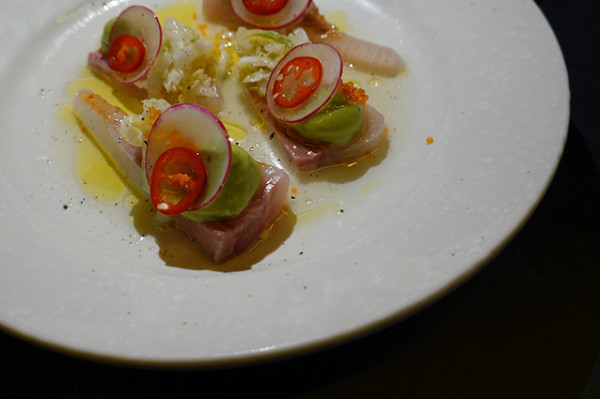 Encouraged into a Tasting Menu ($65/person) for our first visit, we kick off with a reduced portion of Kingfish in Kimchi Water ($24). Here four toothsome slices of the raw, pale-fleshed fish are topped with white kimchi, creamy avocado mousse and soybean paste with chilli and radish toppers. It’s a good match to the cocktail, though for the rest of the menu the one-page wine list offers a Brave Souls ‘Lighthouse Keeper’ Riesling ($12/glass) from the Barossa Valley that’s very cuisine appropriate. Alternatively, there’s beer – Korean and Australian – plus soju and makgeolli, both served here with added flavouring, perhaps to help ease in drinkers unfamiliar with traditional Korean alcohols. 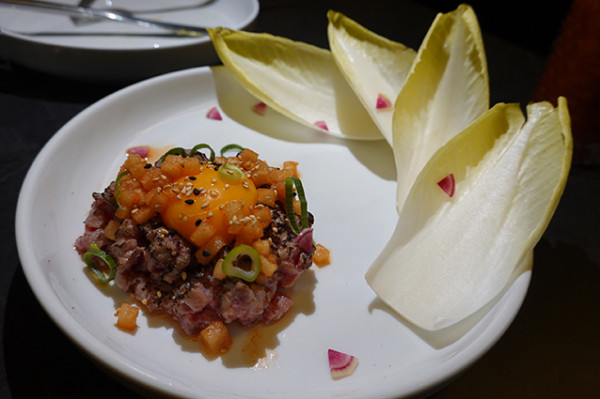 Wagyu Tartare ($24), served on crisp witlof boats, is made even more accessible with a quick lick of the blowtorch. It’s kept fresh and summery with pear and radish mixed through the lightly torched mince with golden yolk to bind it all together. 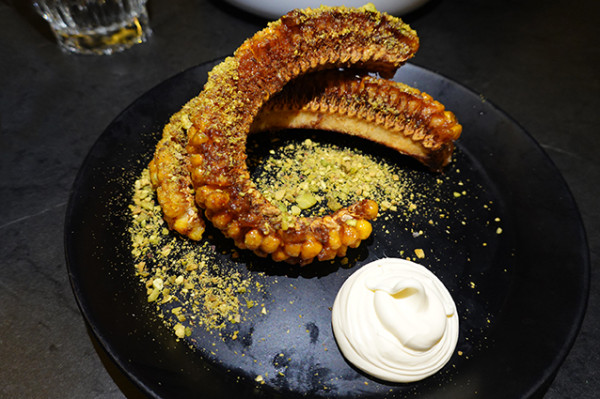 Lewd curls of Corn on the Cob ($15) are finger-lickin' good, lathered in garlic butter and dragged through crème fraiche to make pistachio crumbs stick. 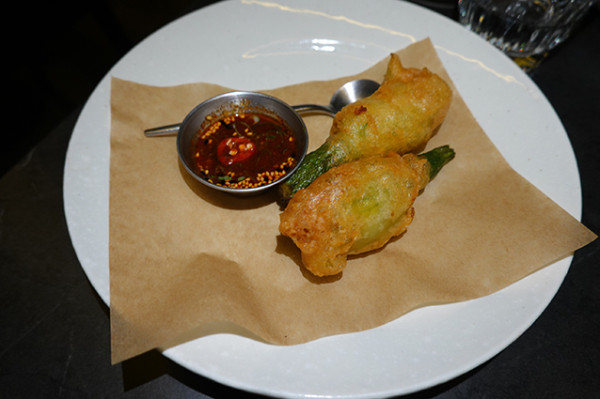 Zucchini Flower Mandu ($24) might be called dumplings here, but they look like pretty standard Italian battered zucchini flowers to me. The Korean twist comes from a filling of tofu cream, shiitake mushrooms and chives, and a soy and chilli-based sipping sauce. 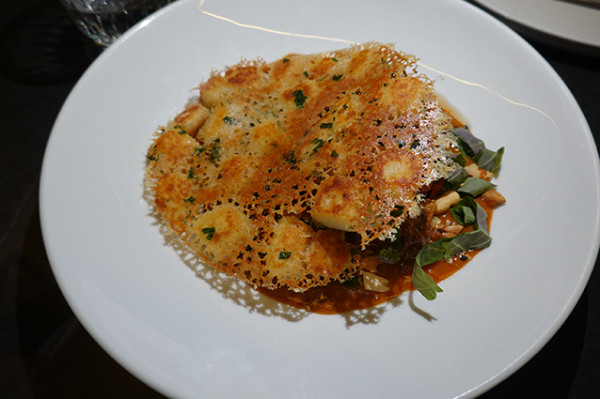 Gnocchi ‘Gang-Doenjang’ ($27) isn’t actually on the tasting menu, because the eye-catching cheese-joined gnocchi topper has to be fried off full-size. For a small surcharge ($8/each), the kitchen is happy to accommodate our request to try the popular dish, which slathers tender beef cheeks in a tasty, thick peanut-studded soybean sauce before crowning the lot with the golden pan-fried gnocchi cap. 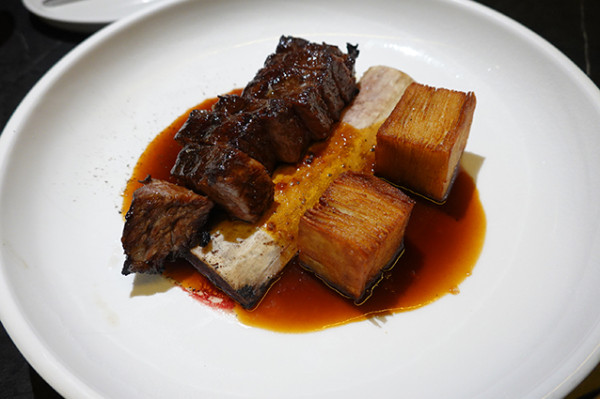 Barbecue Beef Short Rib ($38) is given a French-style sous-vide cook before being served up on the bone with elegant potato pave and galbi jus. The golden bricks of pressed, creamy potato and tender sliced rib slices help take the flavours of traditional Korean galbi somewhere quite refined. 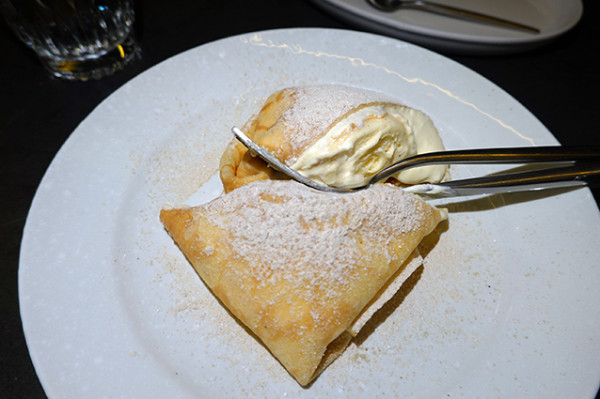 We end with a shared crepe parcel stuffed with mascarpone and ice cream. It’s drizzled with jochung, which is a dark rice syrup Korean sweetener that is reminiscent of salted caramel, and dusted with soybean powder. It’s just the kind of cross-cultural mashup I want to be eating on a plush, royal blue banquette, in the formerly vibrant restaurant strip on Devonshire Street, Surry Hills. Here's hoping Soul Dining helps restore this eat street to its former, pre-light rail glory.