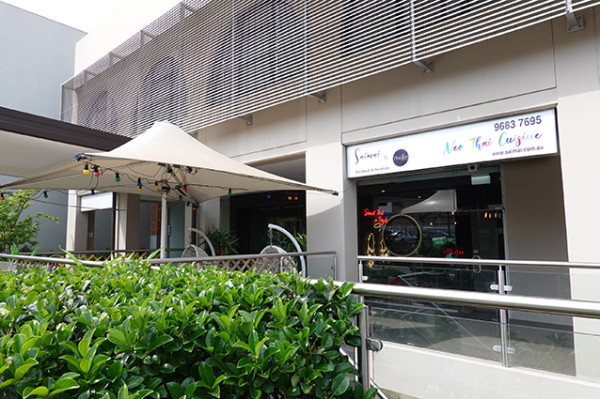 Let down by their seafood supplier, Saimai by Thai I M only had about half of their menu available on the day I dined. You’ll find them on Church Street at the North Parramatta end, where parking is easier to come by, particularly in the nearby Entrada centre. Set at the bottom of a bland, low-rise office block, the Saimai team have done their best to personalise the space and create a little outdoor oasis from the busy traffic. 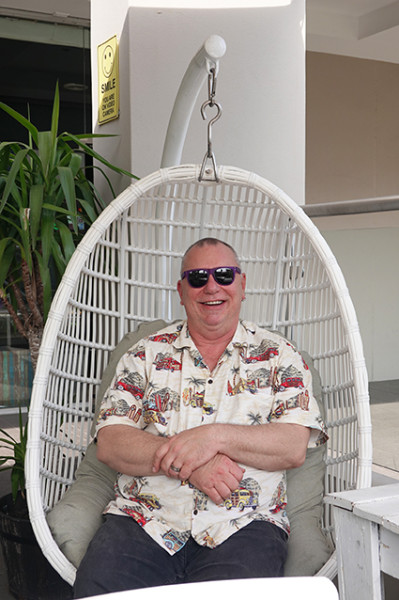 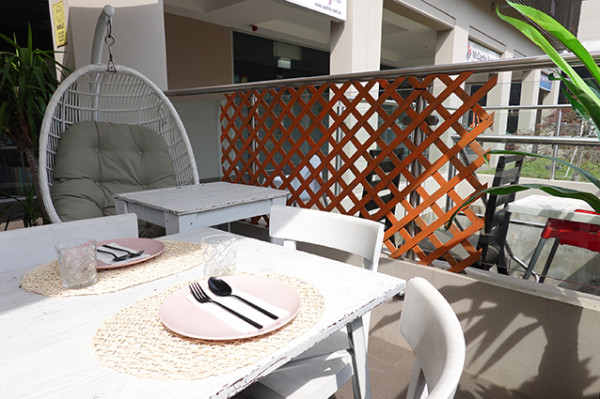 Surrounded by greenery and latticework, the small sheltered enclave of tables and swinging cane basket seats is a nice place to eat on a sunny afternoon. 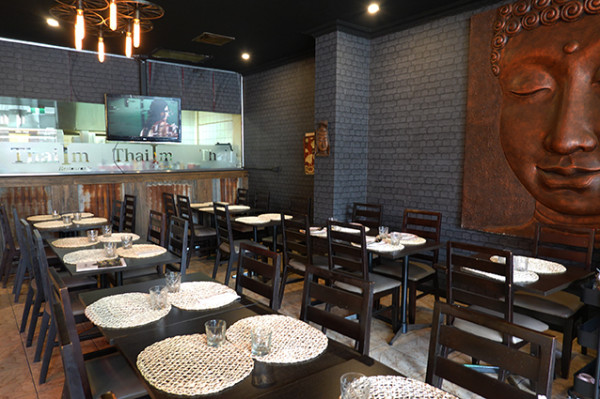 Inside, more traditional dark wood and metal cast Buddhas are brought into the here and now with bright neon angel wings that label their would-be wearer as sweet but a psycho. 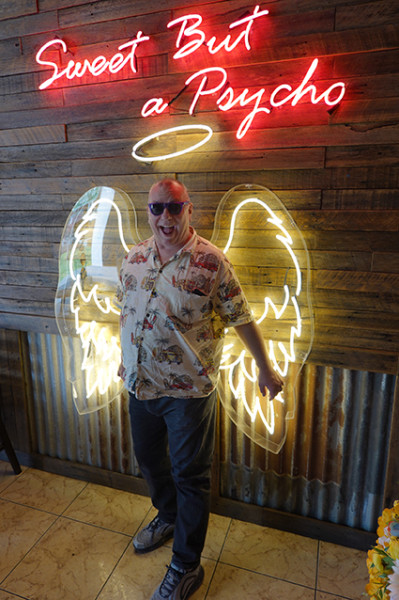 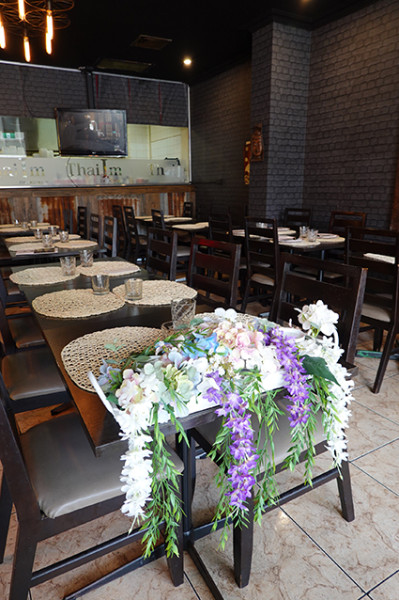 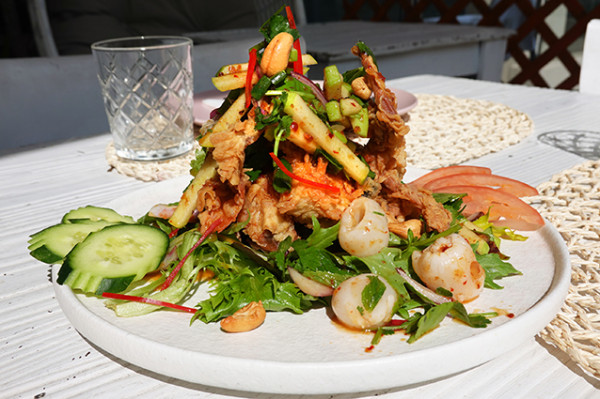 As for me, I’m just here for the eats, though the kitchen does help out on looks with well-presented, colourful dishes. While it’s billed as neo Thai cuisine, the flavours in our Soft Shell Crab Cashew Nut Salad ($22.90) feel familiar. The crisp, battered crab segments are piled up with fresh herbs, matchsticks of green apple and chilli. It’s sprinkled with roasted cashews, and surrounded by elegantly cut trios of fresh tomato, cucumber and canned lychees. This salad punches flavour with pungent fish sauce and lively chilli in a balanced dressing that pushes all the salty, sweet, sour and hot buttons Thai food is supposed to. 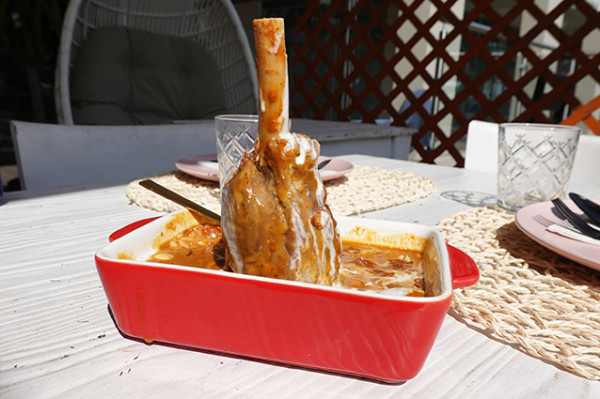 While it has a modern name, Who Killed the Lamb ($18.90) eats like the expected lamb massaman curry. A four-hour slow cook sees the bone of the lamb shank pull out cleanly, leaving behind tender, tasty lamb meat in a creamy sauce that starts with star anise, then quickly gives way to a massive hit of cinnamon. The thick gravy hides hunks of carrot and sweet potato and is enjoyable to consume over rice. 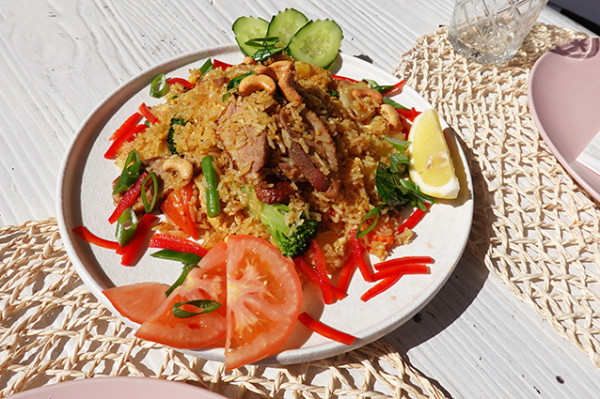 We opt for Pineapple Fried Rice ($14.90) with a Roasted Duck ($7) add-on. Here it’s presented on a plate rather than inside a split pineapple, topped with a good amount of nicely rendered roast duck. The lemon is on the side of this vegetable-scattered plate for a reason – it brightens up this dish no end. 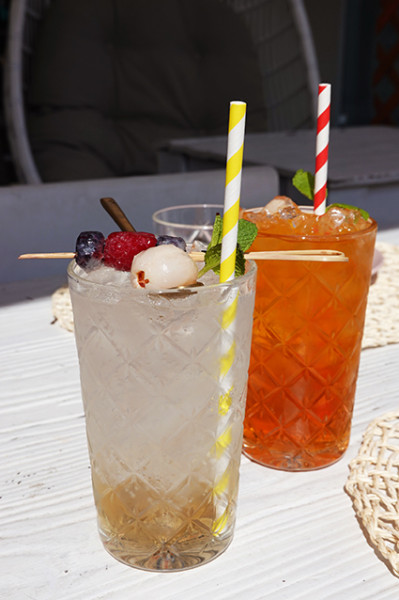 While you can complete your whimsical look with a fairy-floss topped drink, we opted for a frozen fruit skewer on the Lychee Lemonade ($5.90) and the more humbly presented Thai Lime Tea ($3.90). The syrup-based lemonade is teeth-achingly sweet, so give it a good stir before drinking. My palate wanted for fresh lime in the tea, as it had a lime cordial edge, though the sweetness was in better balance. With so many Thai restaurants to choose from, Saimai by Thai I M have updated their offering to stand out from the crowd, without losing sight of what appeals about traditional Thai cuisine.