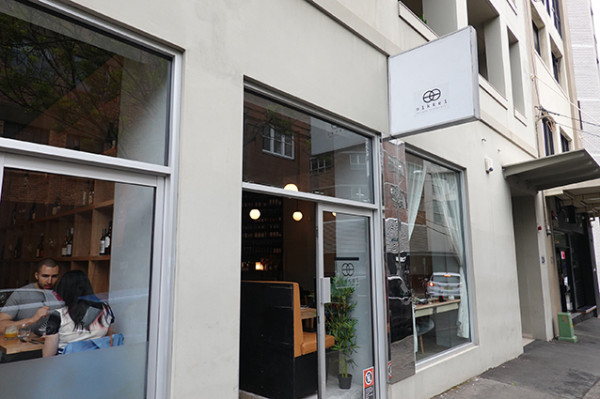 There’s fusion cuisine, and then there are situations where two cuisines fit together so well, they create something greater than the sum of their parts. Nikkei unites Peruvian indigenous cuisine and ingredients with Japanese culinary sensibilities; and it’s been shaped through more than a hundred years of Japanese immigration. The particular success of this cultural overlay comes from the centrality of fresh fish in both culinary traditions. 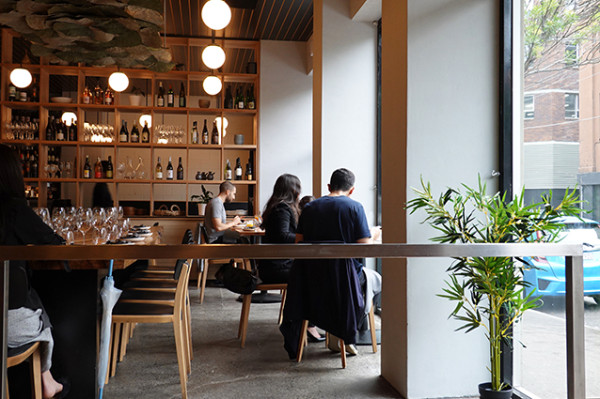 Combining the elegance and delicacy of Japanese cuisine with the fresh, spicy punch of Peruvian cooking, gave the world our contemporary ceviche, where sashimi-style cuts of raw fish are lightly marinated and served quickly. 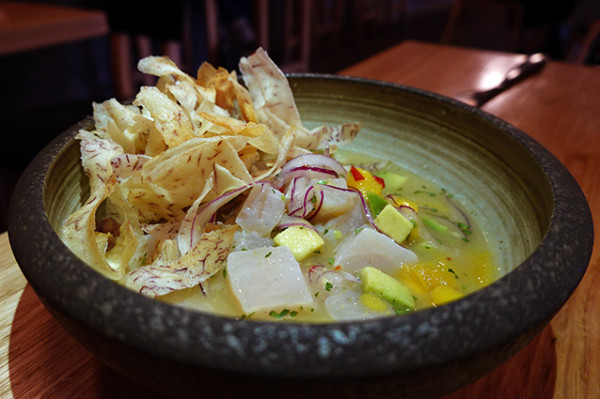 Nikkei Bar & Restaurant’s Swordfish Ceviche ($22) is a very good exemplar of this Nikkei dish, taking texturally firm swordfish and serving it with perfectly ripe avocado and mango, coriander, Spanish onion and not-quite-enough chilli, under a scattering of cassava crisps. It's all swimming in a salty-sour, lime-based marinade loaded with garlic and fish juice that the Peruvians refer to as leche de tigre (tiger’s milk), which lightly cures the fish and is often served alongside it in shot glasses as an aphrodisiac and hangover cure. 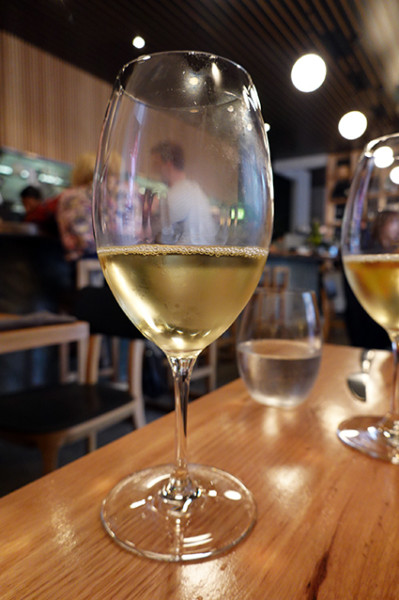 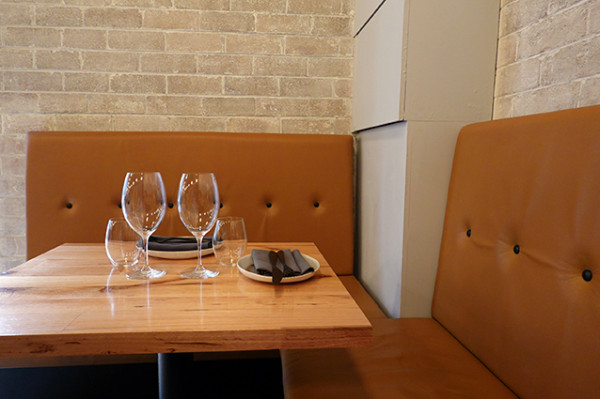 Against the off-dry 2019 Reed ‘White Heart’ Riesling ($67/bottle), it’s a palate-cleansing way to begin your adventure in this Sydney newcomer. Nikkei has taken over Bodega’s old digs, though with so much space between the tables, you’ll hardly recognise it. It’s a fifth hospitality venue for Jason Ang, Tina Wing Kee, and Christopher Ang, who also own Tokyo Bird and Sando on the same block, plus Osaka Trading Co. in Tramsheds and Banchō Bar in the back lanes of Haymarket. 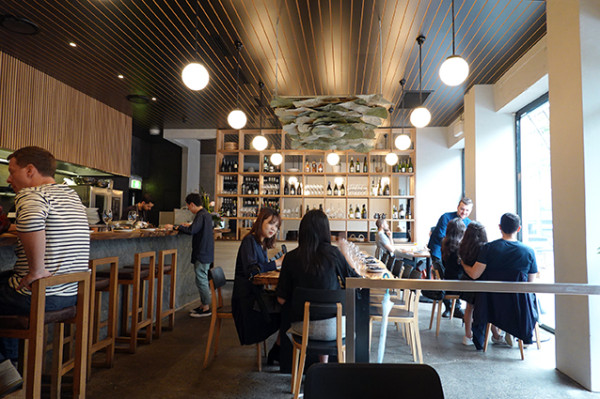 The interior is attractive and understated. Polished aggregate floors and one side of windows looking onto Commonweath Street are warmed up with the stylish integration of organic elements, like a simple green bamboo plant in the front window, a lotus-leaf false ceiling, and striped panelled wooded ceilings and surrounds on the open kitchen. 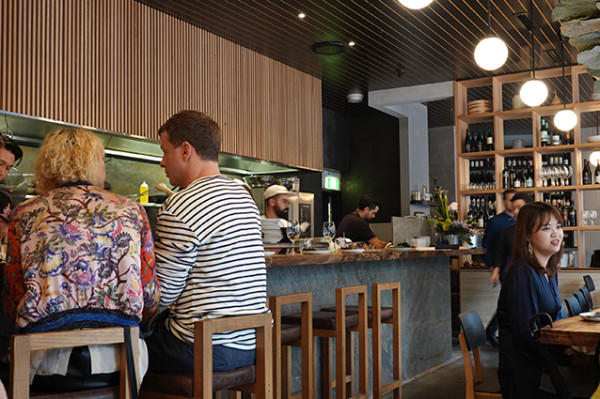 Seating (for 55 people) is separated into bar and restaurant by a wooden feature wine cabinet. 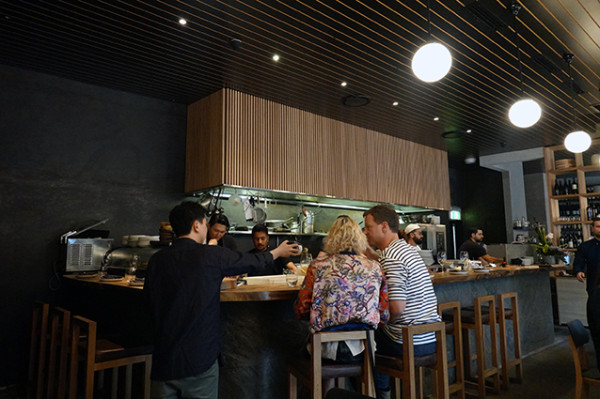 The restaurant space offers up counter seating along two sides of the well-populated kitchen, wooden tables, a long communal table made from a camphor slab, and a couple of tan leather banquettes for folks who like tucking comfortably into a quiet corner, like me. 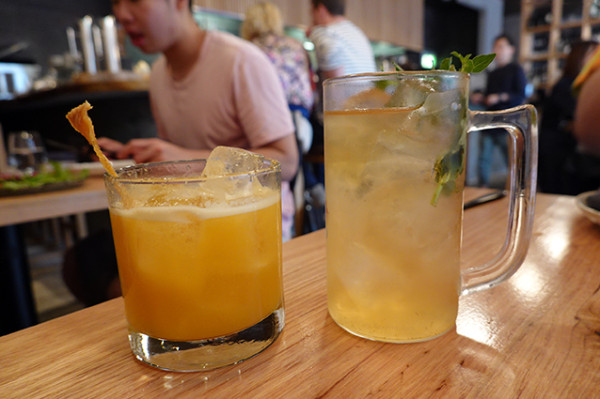 There’s plenty to get excited about on the cocktail list, with Peruvian and Japanese flavours utilised on the eight-strong list. Oregano ($17) uses oregano tea, rosemary and shichimi, and rice vinegar to swirl some smoke around Suntory Toki Whisky for a palate-satisfying drink that keeps flipping between its elements. Agrio ($19) is a Peruvian-inspired sour that's based upon house-made pineapple pisco with the mouth-coating fruitiness of passionfruit, tartness from pink grapefruit and lime, and a bit of complexity from Amaro Montenegro and orange bitters. It’s got a mouth-coating appeal that drinks a bit like the ceviche of the cocktail world. 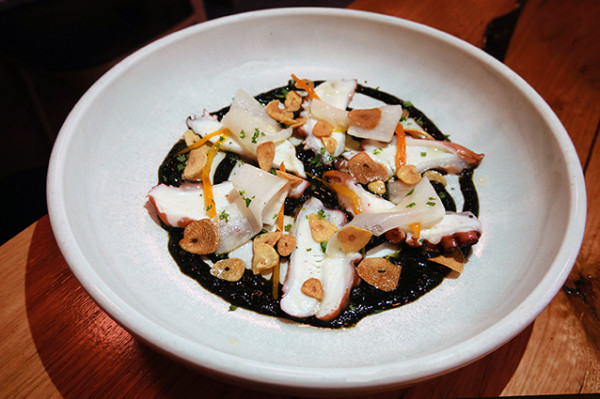 It’s not just the drinks making us happy – on the tunes, the Orquesta de la Luz (Orchestra of Light), a Japanese salsa band, creates a nicely transportive atmosphere. We move onto sake - Anamoto Junkara Junmai Ginjo  ($45/flask) - with our next raw dish, an Octopus Tiradito ($20) recommended by Venue Manager Marco Oshiro Giron, whose Nikkei-jin heritage partially inspired the concept. You’ll like this sashimi-style ceviche's nori and garlic-chip intensity if you enjoy black garlic, balanced by pickled daikon and our soft, round sake that ends with a whisker of acetone. 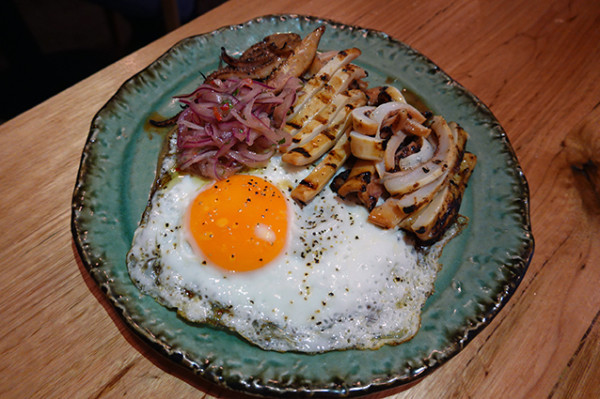 Southern Calamari ($28) makes up for the lack of size in wackiness, eating like a Peruvian breakfast after the shreds of char-grilled calamari, pickles and fried egg have been well combined with the underlying roast banana, kept from being oversweet by plenty of garlic. 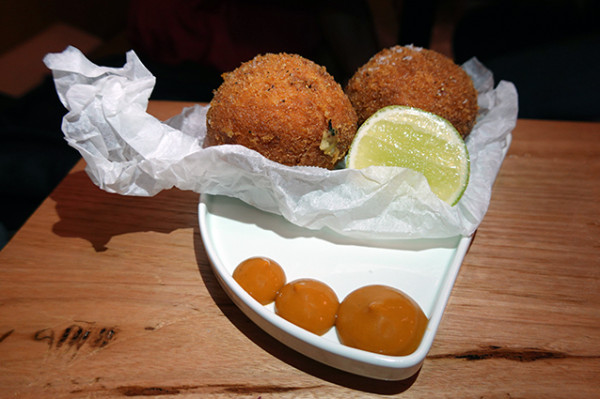 The only thing I miss here is chilli, particularly on the Papa Rellenas ($12/2) where airy, golden-brown corn fritters are served with a buttery Japanese katsu curry sauce that has no heat. I suspect Brazillian head chef Lucas Cerullo David (ex-Osaka Trading Co.) has been asked to tone it down. 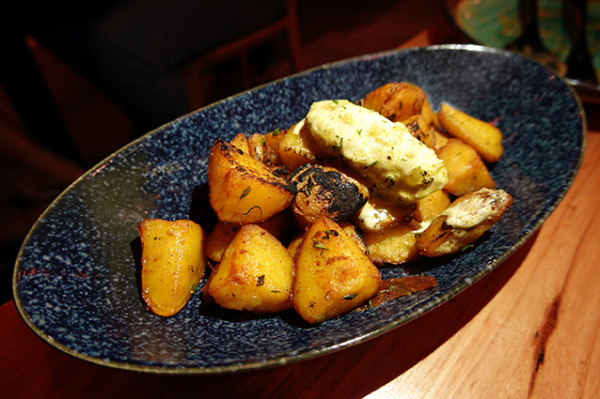 And what’s more accessible than meat and potatoes? With Peru considered the birthplace of spuds, the Roast Potatoes ($12) here had a lot to live up to. Blackened and glistening with melting huacatay mint butter, they’re tasty and lemony enough to give the Greeks a run for their money. 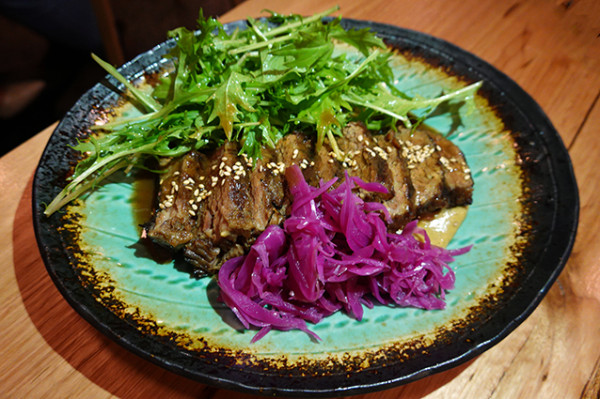 I was slightly less excited by the Beef Short Rib ($36), removed from the bone and a bit dry and overcooked against pickled cabbage and Peruvian corn puree. On top of all the garlic in earlier dishes, its miso garlic flavouring combined with small portions overall did have me reaching for the dessert menu. 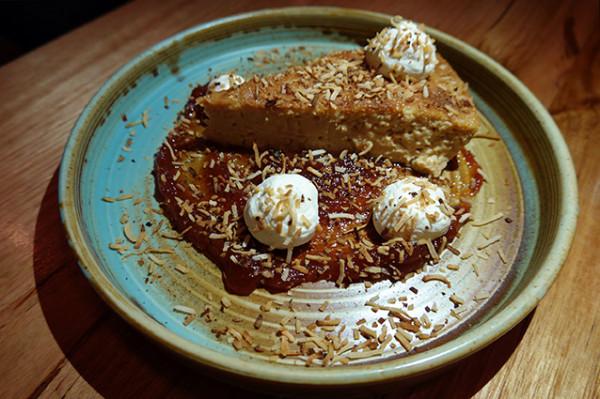 While the Dulce de Leche Pudding ($15) struck me as a bit bland, the Sweet Potato Picarones ($16) had me wanting to lick the remnants from the bowl. 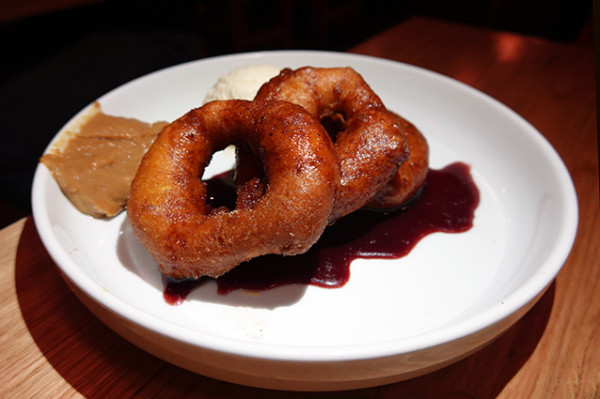 This is one of those desserts where the individual elements – quinoa ice cream, chicha morada (a beverage made from Peruvian purple corn) and cola syrup, a smear of roast sesame butter, and even the savoury doughnuts themselves – do not work separately. Put them together though, and you'll be smiling about American peanut butter and jelly for the rest of the night.