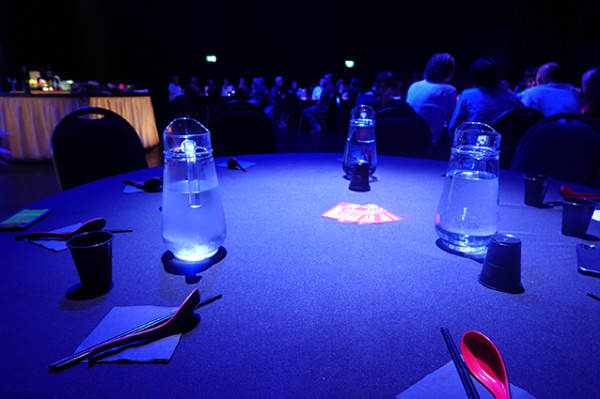 In a darkened cabaret set-up where a hundred guests are arranged in parties of ten around black table-cloth draped tables, you could hear a pin drop as Korean chef Heather Jeong, tears Chinese cabbage leaves by hand to make kimchi. While she prepares this Korean staple, Jeong takes us through the story of her appa (father). It’s a story of immigration through the Korean war and subsequent American occupation, a time period which brought along with it American delicacies like Baked Beans, canned frankfurters, and Spam. 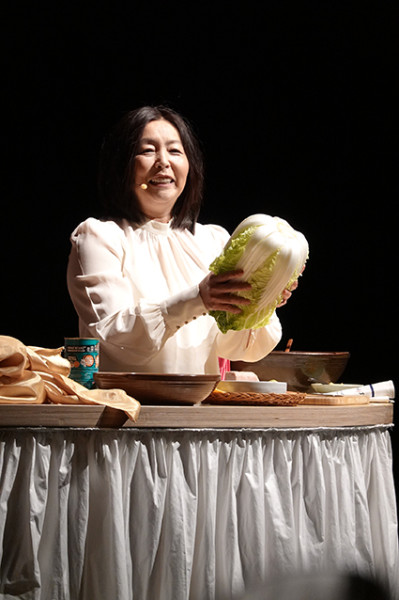 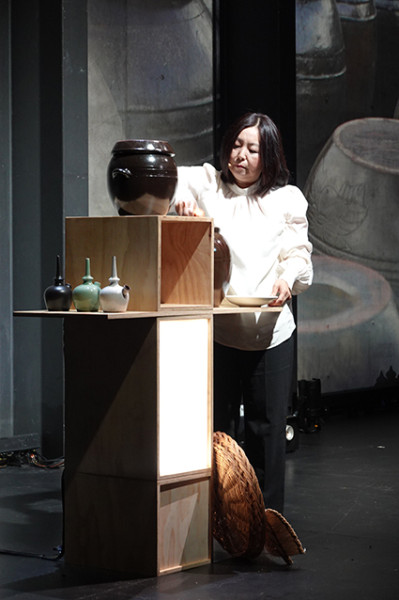 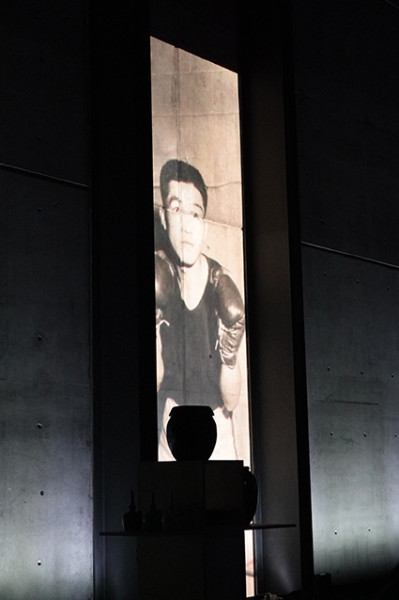 Tinged with han, an emotion coloured by grief said to be characteristic of post-war Korean culture, Jeong’s tale covers her family’s nearly decade-long separation that came to a conclusion when her appa immigrated to Australia as one of 2000 Koreans granted amnesty after South Vietnam fell in 1975. Finally meeting her father at the age of nine, Jeong explained that she has long “struggled with daughterly love”. As Jeong’s story unfolds, her now-deceased appa’s photo appears on the wall behind her earthenware pot of fermenting kimchi. 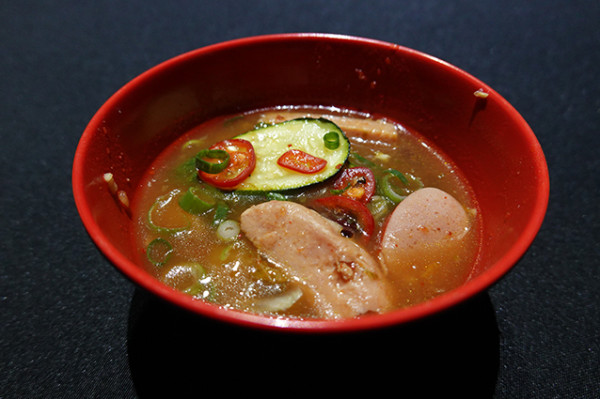 Jeong teaches us that it's often through food that we show love, even difficult love. Her segment ends with guests being served her father's favourite dish - Korean army stew (Budae-jjigae) - where tteokbokki (Korean rice cakes) and kimchi mingle with those canned American favourites that arrived in wartime. 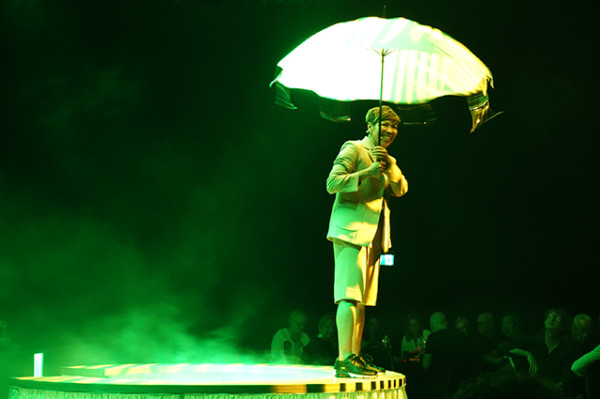 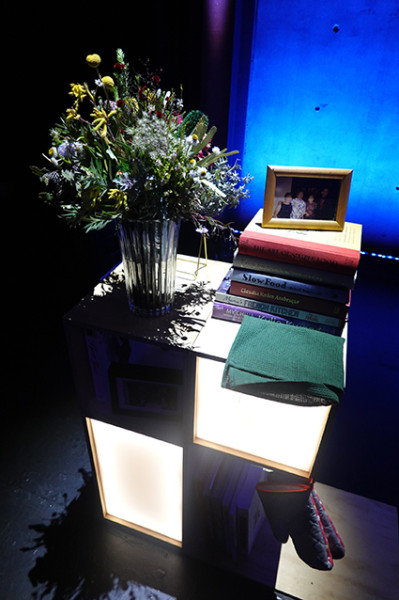 It’s a poignant beginning to Director Darren Yap’s Double Delicious, a Sydney Festival show that builds upon Contemporary Asian Australian Performance’s 2014 performance, The Serpent’s Table. In this version of the show, five Asian-Australian storytellers explore the nuances of Australian immigration through dance, music, storytelling and food. 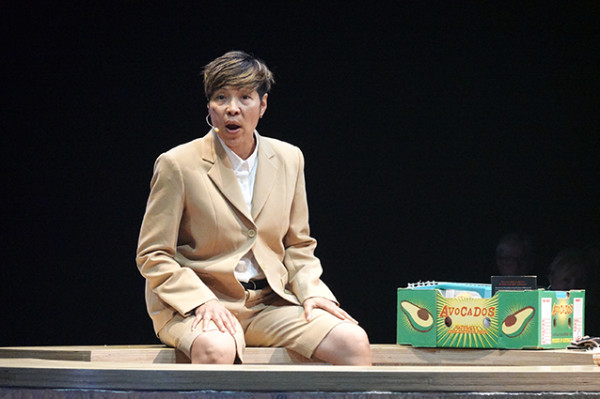 Arriving at Melbourne airport with her three siblings, all wearing climate-inappropriate matching tan suits, actress Valerie Berry gives us a taste of what it was like to be one of four brown kids growing up with a white Australian stepfather in Ceduna. In case you're scratching your head, that's the last big town before you hit the long empty stretch of the Nullarbor Plain. 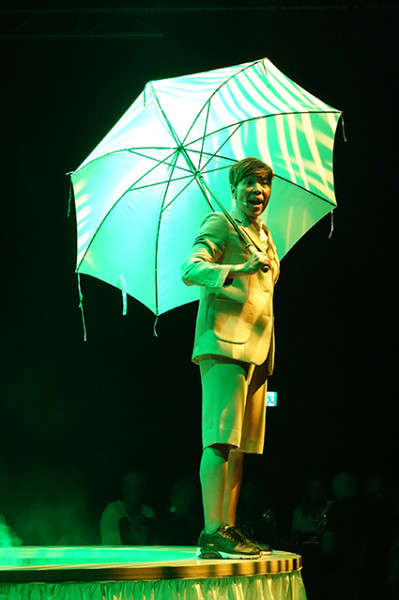 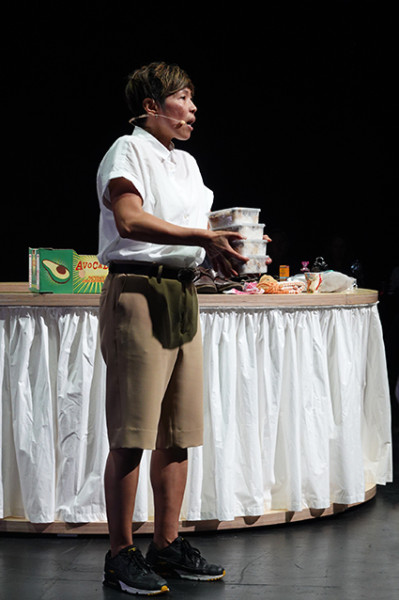 With a first stop at K-Mart for thongs and shorts - “matchy-matchy is the theme of our childhood” – Berry touches upon the selective racism that permeated both her family, and my own, and likely the rest of Australia's, in the Eighties. 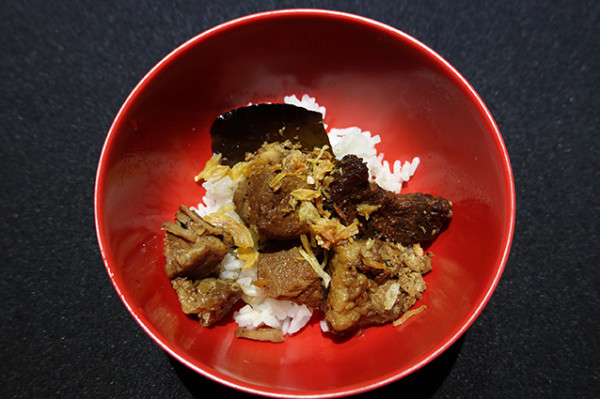 With only a slight dig at Australia's overuse of the crockpot and pressure cooker as the driving force behind her Filipino-Australian mother’s decision to return to cooking the food she grew up with, Berry introduces us to nicely char-grilled beef adobo served on rice. 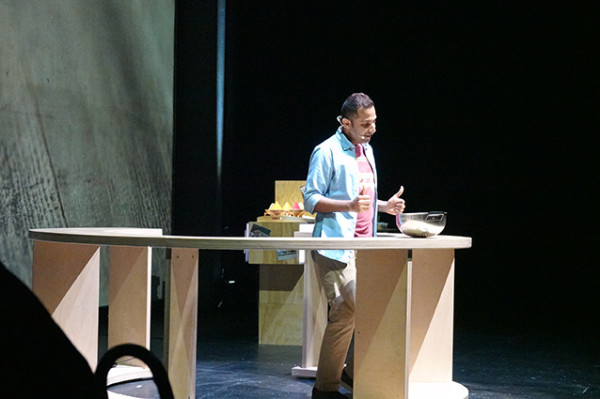 Choreographer and dancer, Raghav Handa, lays out the spices for a ceremonial Northern Indian dish called chola with great reverence and care. In liquid motion, Handa reminds us that cooking has much in common with the art of seduction. Breaking into chaotic dance, Handa explores his (dis)connection with mother India, explaining it “doesn’t seem to have much to do with my life in Australia”. 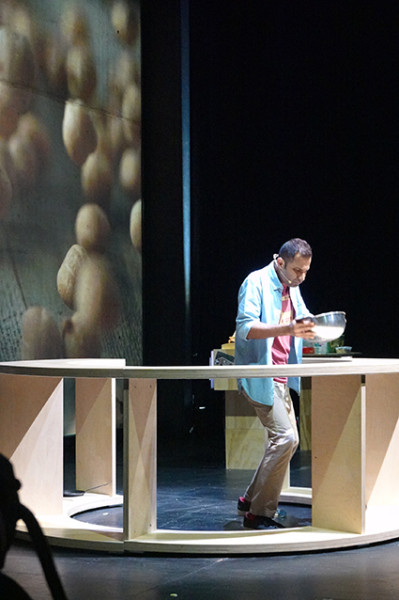 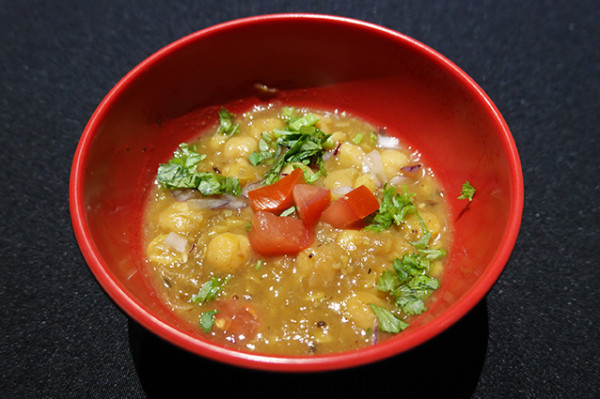 As we tuck into a bowl of chickpeas with vibrant round spices, prepared by the talented chef Christine Ware off in a hidden kitchen, we ponder the liminal spaces between cultures that migrant Australians are left to inhabit. 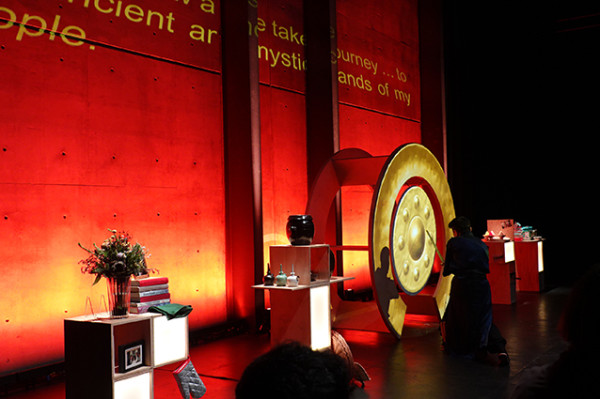 Flipping the set on its side while we’re all occupied with eating, the kitchen becomes a giant gong as the audience is seemingly transported straight to China. 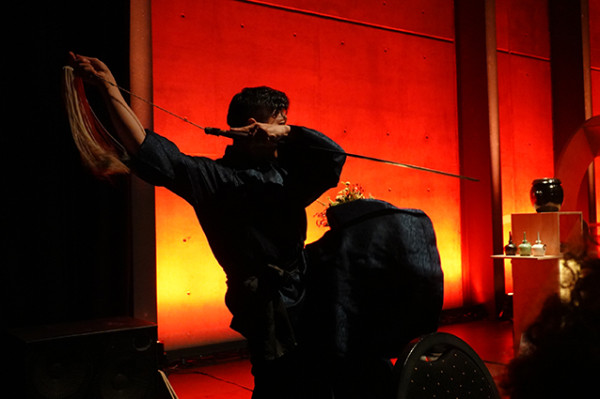 Putting a stop to this idea rather quickly, writer Benjamin Law enters the fray with a broad Australian accent. 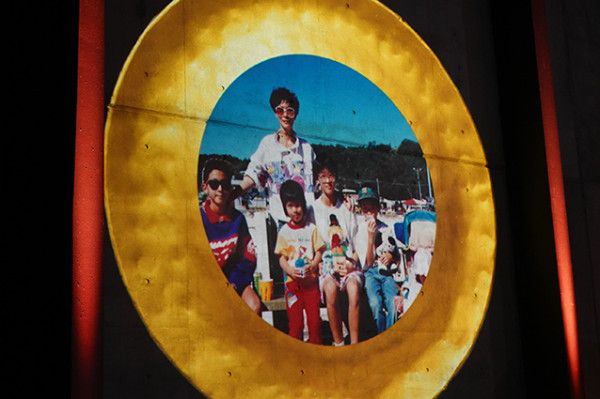 Starting out his life as a “weedy little runty Asian kid” in Caloundra, Queensland, Law discusses the way we romanticise the idea of authenticity. As his hands expertly pleat pork and prawn wontons in one of nine possible ways, Law asks the audience to consider where our obsession with authenticity leaves anyone we deem to be inauthentic? 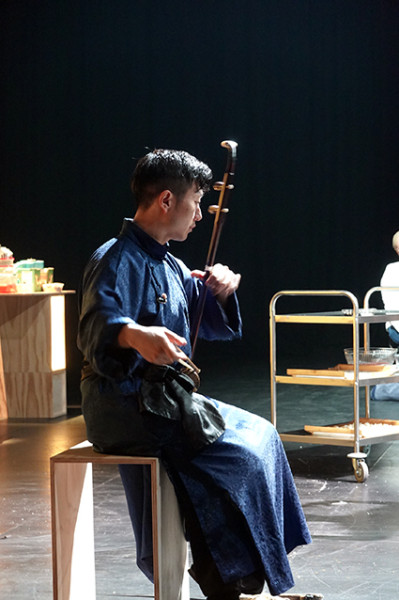 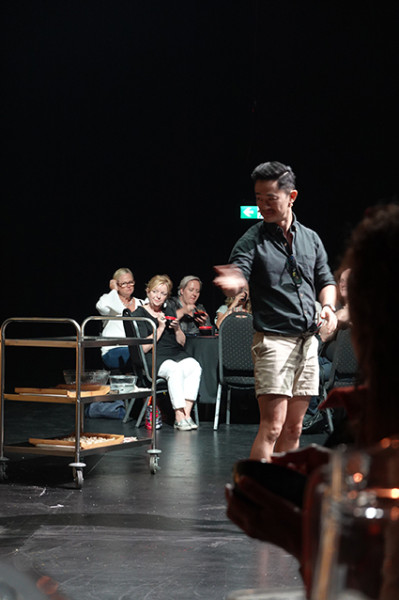 “Wherever we were in the world, we were always going to be at the margins of things, never the centre,” Law explains of himself and his siblings, who traveled to Hong Kong as adults, and found themselves to be outsiders there too. 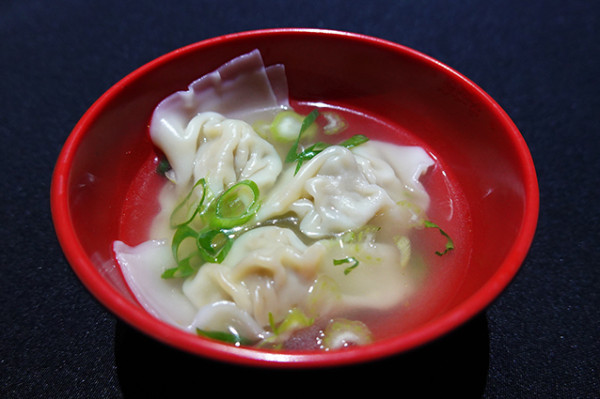 In our bowls Law offers up silky wontons created from an old Chinese recipe made using fresh Australian ingredients, that eats like a metaphor for his life. 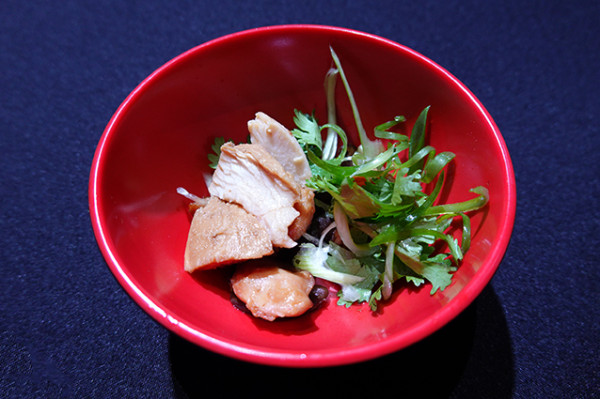 We end the show by drinking in the intoxicating flavour of Chinese rice wine, cinnamon, star anise and sesame oil with Elizabeth Chong’s moist and juicy, black satin chicken. 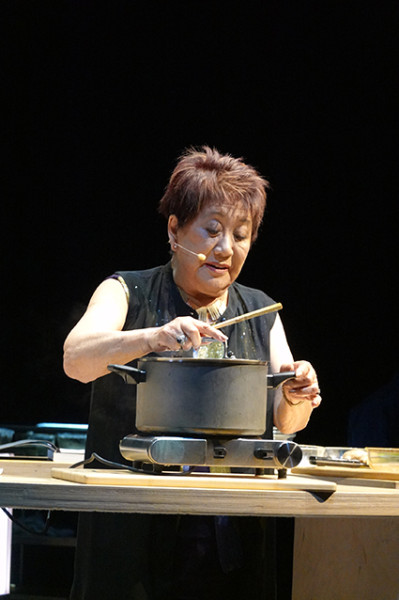 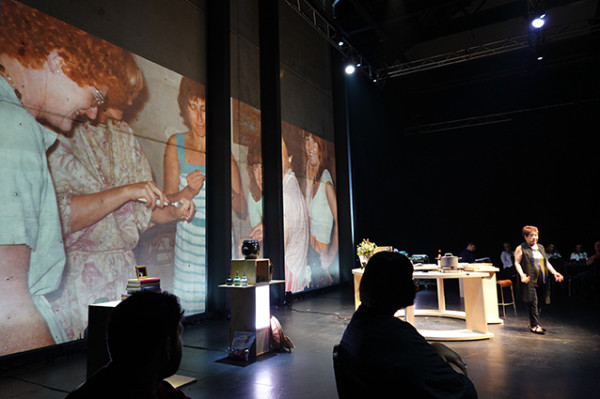 Plucked from her award-winning cookbook, it’s the highlight of a career that has spanned 57 years of cooking classes and 12 years of television appearances on Good Morning Australia with Bert Newton, all woven into an upbeat story of how 88-year-old Chong lost a husband and a hobby, and gained a very successful business. 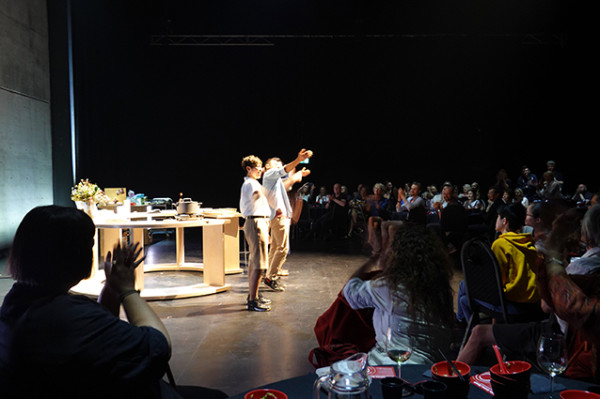 An Aussie battler made good - what could be more Australian than that?

EDITOR'S NOTE: Double Delicious was presented at Carriageworks as part of Sydney Festival.
The festival runs from 8-26 January, 2020.
Collapse