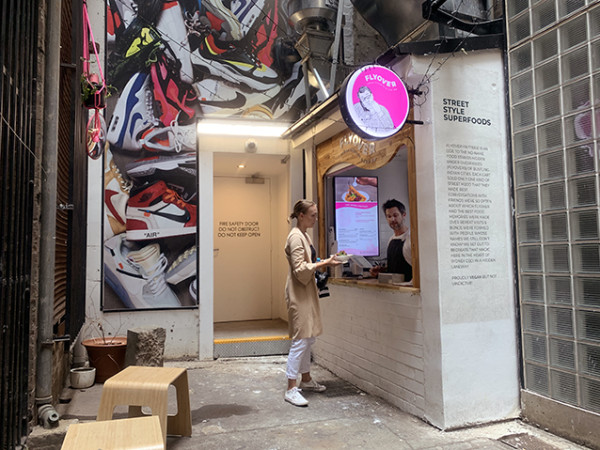 Ducking down Temperance Lane sees you take you take your life into your own hands as you blindly navigate through a cloud of collective smoke from a hoard of desperate puffers. The light at the end of this reeking tunnel is a clever little eatery, thankfully positioned around a corner and as far away from the smokers as you can get. 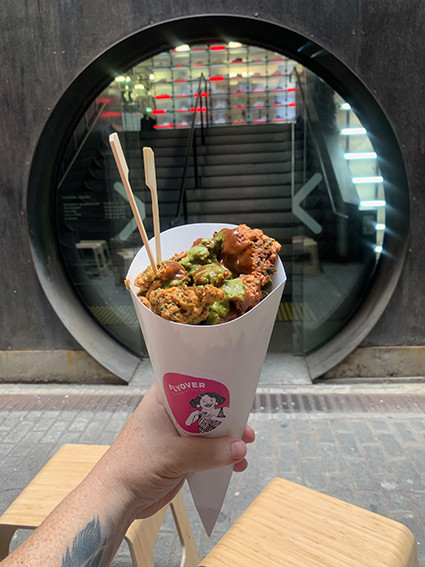 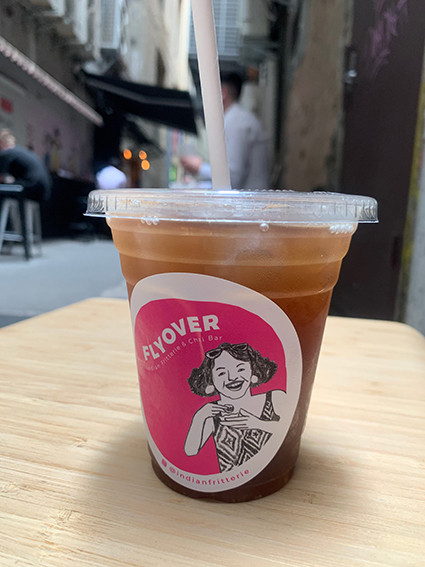 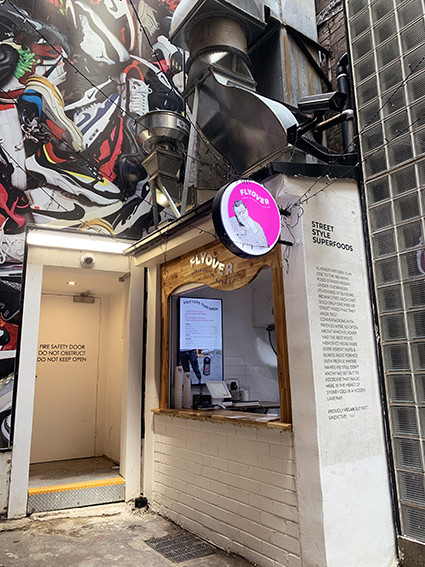 Run by Gunjan Aylawadi and Patrick Frawley, Flyover specialises in pakoras and chai. The crunchy deep-fried Indian fritters are made using besan (chickpea flour), herbs and spices, and a rotating selection of seasonal vegetables. For my first visit, I ate them as a paper cone of Fritters ($9.90/$15.90) drizzled in house-made tamarind and mint chutneys. The contrast of cumin, green tomato, coriander and onion fritters, with greener Chinese broccoli and garlic fritters was good, though the large sized cone was overkill as lunch for one person. They ate quite well against a Flying Tai ($4.90) tamarind-based thirst-quencher, only wanting for some fresh chilli bite. 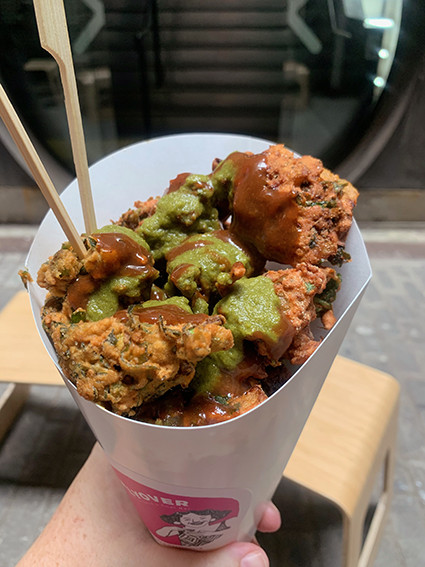 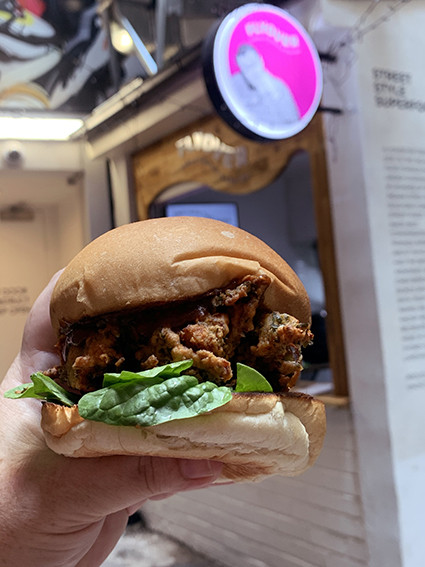 Braving the second-hand smoke for another vegan fix, on my repeat visit I took the day’s crunchy sweet potato, kale and garlic pakoras sandwiched between a soft potato bun as a Pao Burger ($11.90). 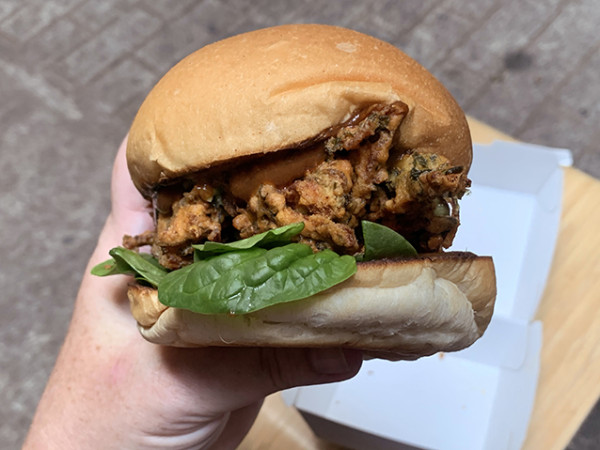 Teamed with green leaves, tamarind chutney and beetroot, it was tangy and filling, but lacked any semblance of chilli heat. 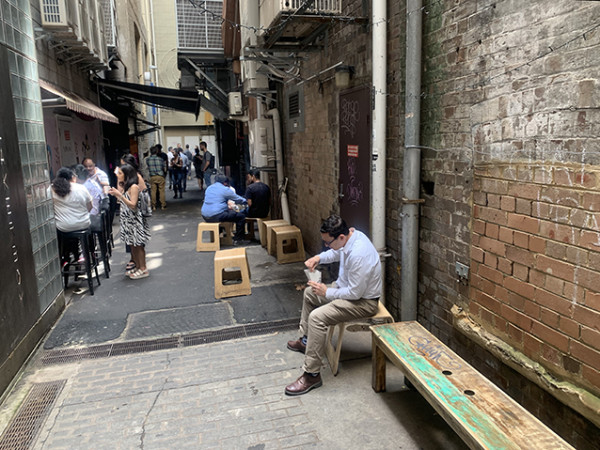 Pulling up on a stool in this smoke-free end of the laneway to eat my Indian street-style lunch, I overheard an Indian customer giving Aylawadi some similar stick about the insipid Fried Green Chillis ($1.90/each) he’d just eaten. 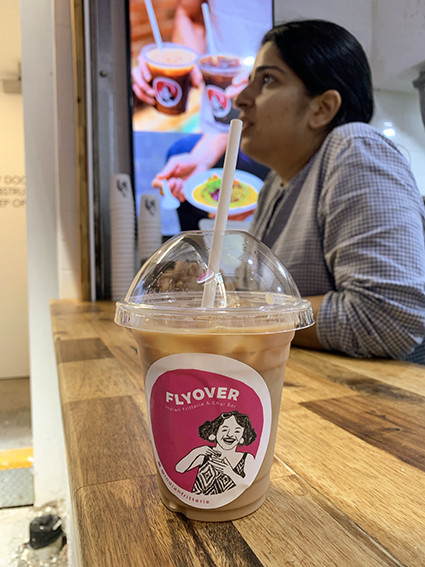 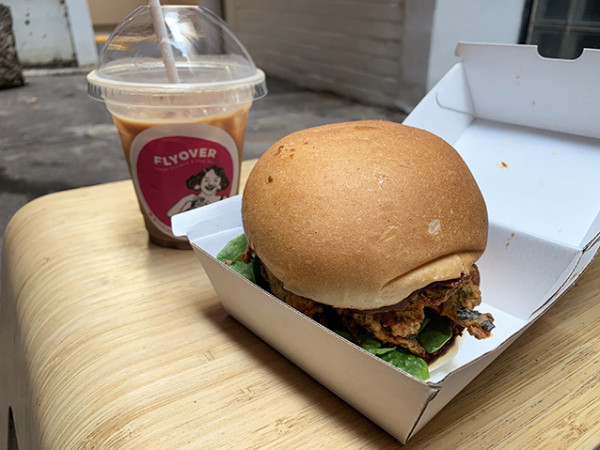 Musing over the eatery’s other focus – chai – I suspect if Flyover added an option for those of us who like Indian food to pack a bit of punch, it could win my business again, even if I do have to run the gauntlet of smokers. The Ginger Masala Iced Chai ($4.90) by the way, was built on Bonsoy soymilk and Assam black tea, against a gentle hint of ginger masala, making it good for those who hate the usual (overdone) dominance of cloves.