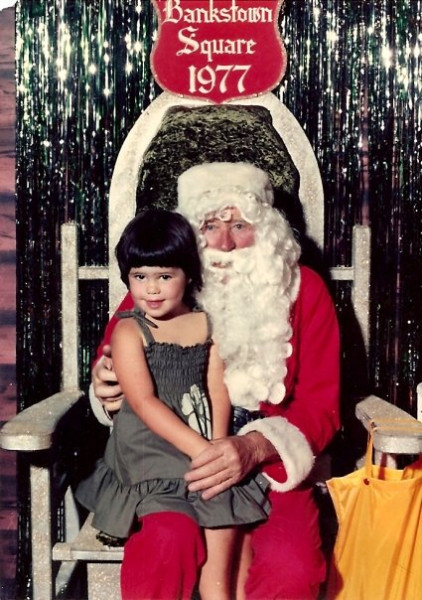 With Australia Day looming I thought I would try and put into words why I love this country, and what that means for me. I was born in Australia 38 years ago, though my parents both arrived here by boat. My childhood years were spent in Panania, a sleepy suburb of Sydney on the East Hills line. Like many suburbs, ours had a milk bar run by a Greek family where I bought mixed lollies as often as my pocket money enabled. Somehow twenty cents always went a long way there. Around the corner there was a chicken shop, where another Greek family made hamburgers, Chiko rolls, hot chips and the best potato scallops I can remember.

If my family went out for tea, it was to the neighbouring suburb Revesby, a slightly more cosmopolitan destination that boasted a Chinese restaurant with a fancy pagoda roof. My favourite dish was deep-fried shredded pork in special sauce. If it was a special night, we'd sometimes drive to Strathfield for Indian at Surjits. It was exciting because it had a tandoor. If we were lucky, we'd be allowed to go into the kitchen to peer down into the hot, red hole. When I was a bit older, I would bargain mowing the lawn for my Father in exchange for ordering tandoori chicken. If I was lucky, the next day I could take cold tandoori chicken to lunch. Sometimes having curry on my white bread sandwiches made the other kids screw up their noses at the smell. I thought they were idiots - curry trumps Vegemite any day! Well except when you have gastro... to this day, the only thing that makes me feel better is Vegemite on toast.

My closest shopping centre was Bankstown. It's where Mum went to get our Santa pics, and where later, as a teenager I would beg to be allowed to catch a bus to for the shops, cinemas and heady freedom of being at large in the world without adult supervision. My closest beach was Cronulla, another popular destination as a teenager. We also went there at night, when one of my two best friends, Tracey got her licence. We called her car the brothel-mobile because of the lush red velvet interior, and sang to the radio as we headed to the beach. On a recent visit I smiled to see the little Italian pizza shop where we used to buy ham, pineapple and banana pizzas to eat on the sand. It's a crazy-good combination I have rarely seen elsewhere, despite nearly seven years as a food critic.

When my family had a weekend barbeque, it used to be at Lake Gillawarna on the edge of the always muddy Georges River. I remember getting hungry to the smell of souvlaki as we waited for cooking space on the communal barbeques. It was also where we all celebrated Australia Day in the area, side by side; our sausages intermingling with the aroma of all manner of other cuisines. Some women wore headscarves, even back then, but I don't remember anyone ever knocking them for it. They were just the next picnicking family over, sometimes they made me jealous because they had more kids; and often we all played together, running around as a giant, marauding mob.

So when it comes to patriotism and protecting our culture and traditions, I hope you understand that these memories are what I struggle to protect. I feel Australian when I eat hummus and souvlaki, curry and pizza as well as sausages and barbequed chook. I felt my country's spirit in those occasions where we shared barbeques, beaches and picnic grounds, and I watched adults pick up rubbish that they didn't even drop, because we all wanted those shared spaces to remain beautiful.

When I hear the song True Blue, it doesn't make me think of drunken louts wearing our country's flag as a cape. It reminds me of John Williamson singing it for the rural firies, and those that lost their homes after a big blaze. The bit that I always thought of as the essence of being Australian was mateship. It still brings a tear to my eye to watch Australians rally when the wild red rock beneath us throws up something unexpected.

So soberly and carefully, I ask you all to help protect the real Australia, the land we invaded, but have come to call home. I ask that in doing so, you make space for all the people that call it home - the ones that were here originally (and graciously allowed us to stay), the ones that came here by sea to find home, and the ones that will come in the future (by whatever means of transport). For they too will marry our sons and daughters, becoming part of the landscape for our children's children, just as that Greek mixed business, Chinese restaurant and Indian tandoor were for me.