Sydney certainly turned it on for the October Long Weekend - not only was the weather stunning, there were more festivals than you could poke a stick at, and that includes all those warships and tall ships muddying up our harbour! I did my best to take part in as much as humanly possible, and even saw a ship or two along the way...

My weekend started with a visit to the Graphic Festival at Sydney Opera House for their launch party & Robot Chicken starring Seth Green. I was pleased to note there is finally a new canape on Aria Catering's menu - clever carrot-wrapped goats cheese cylinders enhanced with celery salt. 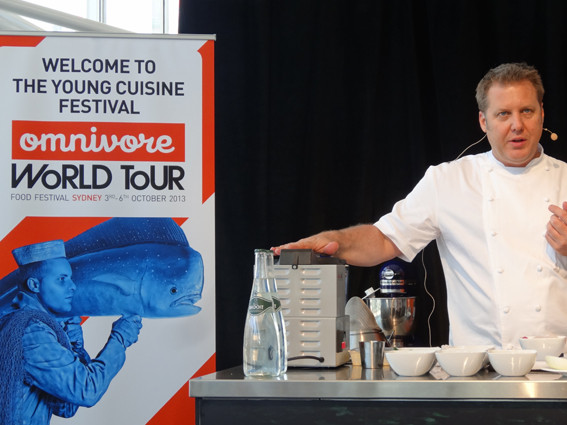 Saturday was spent at the inaugural Sydney showing of the French Omnivore Festival - a festival that celebrates young cuisine. With a stellar line-up of talent, both home-grown and international, it was tough deciding whose cooking I wanted to hear about most, in a masterclass.

My first choice was The Bridge Room's Ross Lusted, who, as MC Simon Thomson pointed out, had recently been dubbed Chef of the Year. After a outstanding meal in his restaurant, I was interested to hear the influences of his cooking. Turns out after working in other people's fine dining kitchens, Ross left the industry for ten years and travelled the world, living in Japan, Croatia & Montenegro, and he credits these influences as seminal to his cooking. In fact Ross's advice to young chefs is: "You've got to read, you've got to travel, you've got to self-educate." 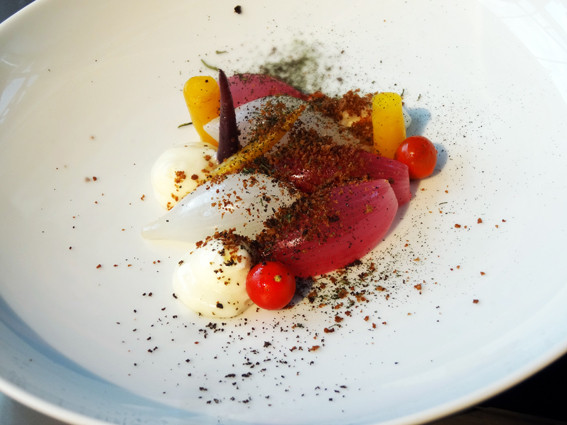 Time in these places where organic comes more by necessity than intention simplifies cooking (and indeed the implements we do it with). As Ross points out he was told: "They don't have a word for organic. The old ladies, you think they have money to put chemicals on their vegetables?" As a result, the dish Ross did for us involved pickling - something he also remembered from his childhood on a farm in South Africa. His top tip for home-based pickling is to use filtered water - there are too many nasties in the tap supplied stuff.

Ross also credits his childhood there for the influence of wood-fire grilling in his current restaurant: "I tend to cook the things that I like now." For example, you won't find calves' liver on the menu at The Bridge Room, because according to Ross: "there are better things to eat." Knowing who he is, and having a reason for why he is cooking the things he's currently cooking, certainly shines through at Ross Lusted's restaurant.

My second masterclass was with one of New Zealand's finest chefs, Michael Meredith, whose eponymous restaurant Merediths is on my wish-list for my next visit across the ditch. He talked about his close relationship to the wilds of New Zealand. He said: "As a team in the kitchen we go out hunting some weekends." Michael went on to say taking them hunting is a way of ensuring his crew honours the animal whose life they have taken, and uses all of it respectfully inside his kitchen. One of his tips for the home-cook was to have a separate kitchen bin for trimmings so you can use them in stocks, and ensure nothing is wasted.

On Saturday evening, I returned to the Australian National Maritime Museum for the Omnivorous Party buoyed by the promise of fifteen chefs working to create twelve bouchée (mouthfuls). With a line-up that included Dan Hong, Colin Fassnidge and Darren Robertson, it was a party to be there and enjoyed (rather than blogged about). I did however snap off a shot of my favourite mouthful - Pasi Petanen's Easter Egg featuring warm egg yolk, white chocolate and porcini dust. Pasi's restaurant Cafe Paci is definitely on my to-do list now!

Of course twelve bites do not a meal make, so I popped into Osteria Balla at The Star for a late-night plate of freshly shucked Merimbula rock oysters and crudo di pesce (raw kingfish carpaccio with radish and celery salad). I was also impressed by a well blended Grapefruit Martini, and the warmth and friendliness of the staff who kept their enthusiasm levels high, on what was clearly a busy night. If you've always wanted to try fine dining, but haven't quite got the funds for a whole meal, dropping in to explore their bar menus with a cocktail is a nice compromise.

Not wanting to confine my adventures to city, I took the opportunity on Sunday morning to head to the Southern Highlands for a produce drive and a pit stop at Biota Dining to try out the bar menu. I was bemused to see that Sydney's glass shortage has spread as far as the Southern Highlands, with bartenders here forced to resort to beakers (probably after all the jam jars had been used up)... Interestingly, I actually liked my causal meal in the garden, watching their angry geese terrorise children, even more than my visit to the restaurant itself (you can find that back HERE) - and you can find my full Biota Dining bar food review HERE.

My south coast produce haul included sea spray, beach bananas, samphire and sea parsley, all from the Snowy River Station. I've been intrigued by these interesting greens for a few years, and relish the chance to add them to breakfasts and snacks at home. Who said eating your greens had to be boring?