A few days at home over Xmas has given me the chance to catch up on some well-overdue blogging! Hopefully you still remember reading about my festival-packed October Long Weekend and are primed for the rest of my adventures! (You can catch up back HERE.) On Sunday evening I found myself with half an hour to kill before dinner, so popped into Grain Bar to do their October Bar Hop Special ($20) which includes Tanqueray gin cocktail with a matched gin-marinated canape. 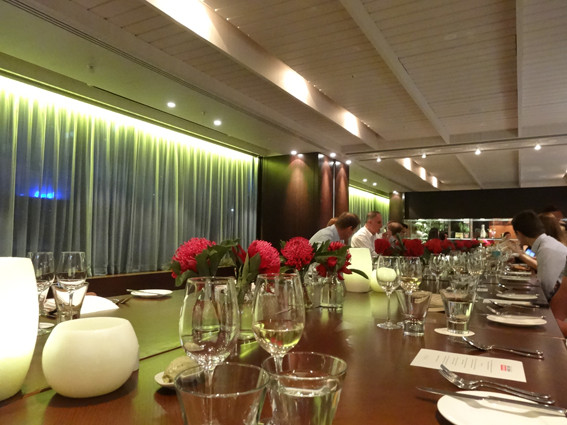 Moving upstairs, I continued my adventure in The Woods' private dining room. This event was another part of the inaugural Australian version of the French Omnivore Festival. I was there for a dueling dinner by two amazing chefs - Australia's Hamish Ingham and New Zealand's Michael Meredith. 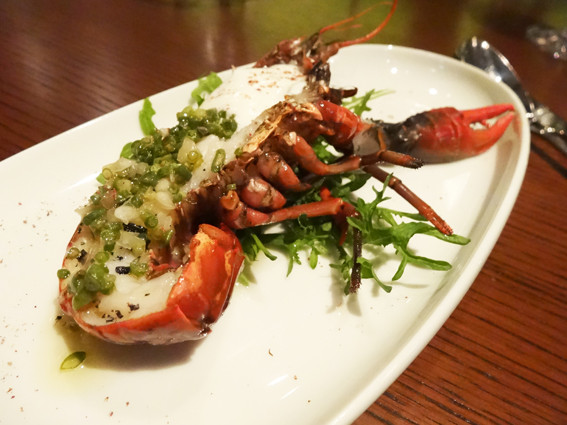 "If I knew things would no longer be, I would have tried to remember better." This quote from the movie Avalon (1990) sums up my feelings, as I sit here and try to capture in words the wonder of Hamish Ingham's cooking on this evening, for alas, he has now left The Woods. This delicacy of this Marron, Lemon Aspen and Smoked Yoghurt was greatly representative of what I liked most about Hamish's cooking - the key ingredient shone and the accompaniment is drawn from the Australian bush (lemon aspen grows in Northern Queensland). 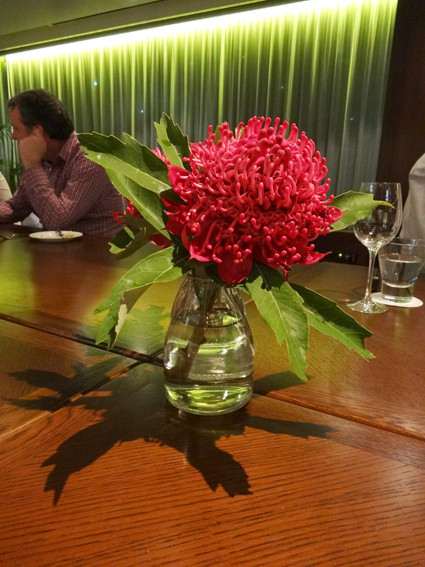 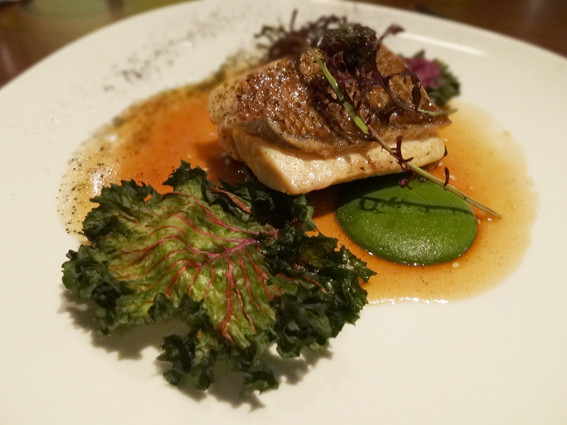 Australian plants were also reflected in the table setting, and again in a later dish of Steamed & Smoked Murray Cod with Pepper Berry, with an interesting green puree of saltbush. 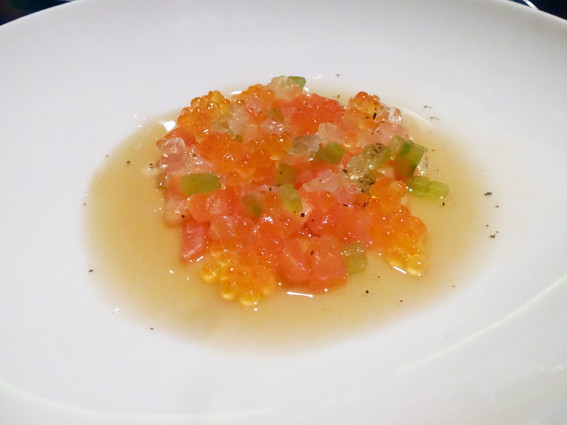 Michael Meredith started off gently with a King Salmon, Horopito, Chorizo and Roe dish. Horopito is a New Zealand plant, also known as pepperbush; and king salmon are an introduced species to the Land of the Long White Cloud, but now successfully spawn in the rivers of Canterbury and North Otago before being transferred to sea pens. New Zealand's farmed king salmon industry there is globally recognised for being environmentally well managed. 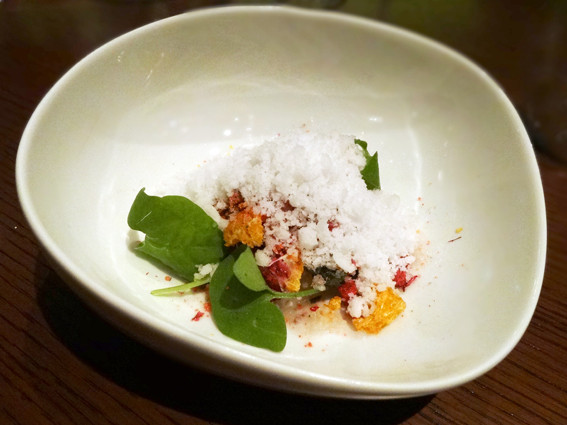 Interestingly though, it was Michael Meredith's pre-dessert that won me most. It was called Coconut and Citrus that gave me the biggest smile. It included freeze dried raspberries, tapioca, sorrel leaves, coconut mousse and granita, and was arguably the most successful palate cleanser I've ever had, making me absolutely salivate for dessert. This simple dish was enough to make me put Michael Meredith's New Zealand restaurant Meredith's high on my wish-list for a trip in the very near future. 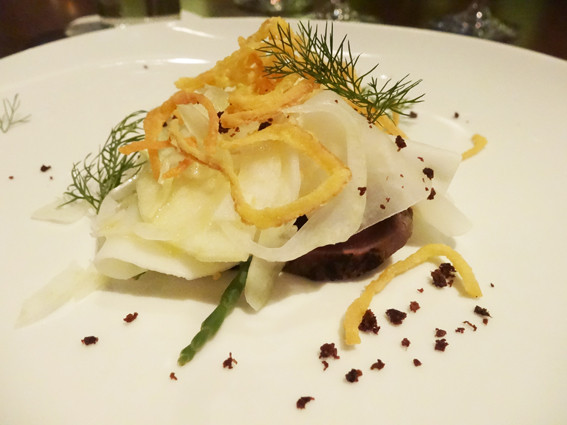 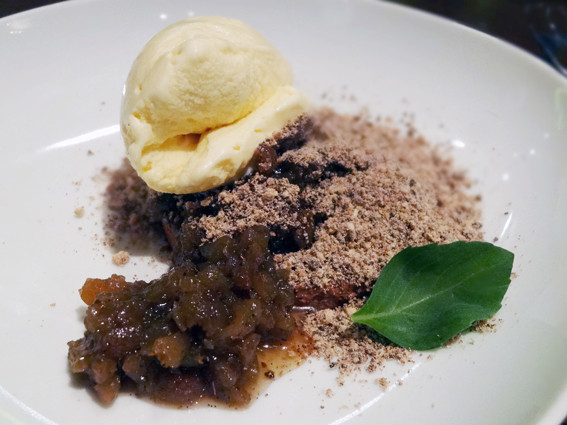 Omnivore Festival gave us a wonderful opportunity to see the cuisine of two neighbouring countries side by side, with two excellent chefs who have very similar food values. I appreciated the way that both chefs uphold native ingredients and show great respect for their key proteins, including their provenance.

Now if you'd like to see a previous review of The Woods go HERE. Also, while Hamish Ingham has indeed left The Woods, you can still eat a slightly different style of his cooking over at Bar H in Surry Hills. 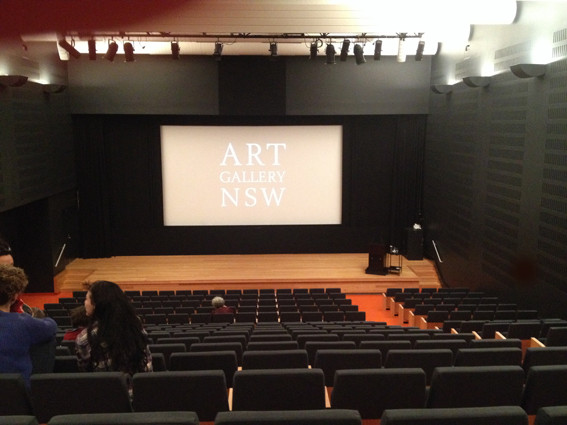 The final day of my October Long Weekend started at the Antenna Documentary Festival in a pretty theatre I didn't even know existed inside the Art Gallery of NSW with a Kim Longinotto documentary called Gaea Girls about would-be Japanese women wrestlers.

To recover from the harrowing journey of these young Japanese women I took in some oysters at the Trippas White Group run Restaurant @ Art Gallery of NSW. There's something rather wonderful about eating Rock Oysters with Cucumber and Reserve Sherry Vinegar ($4/each) against a 500ml carafe of 2010 Moorooduc ‘Devils Bend’ Chardonnay ($41) in front of a floor to ceiling window overlooking the crowds flocking to the International Fleet Review. In fact it was such a perfect end to a wondeful October Long Weekend, I've diarised it to return to soon for a full exploration of their menu...