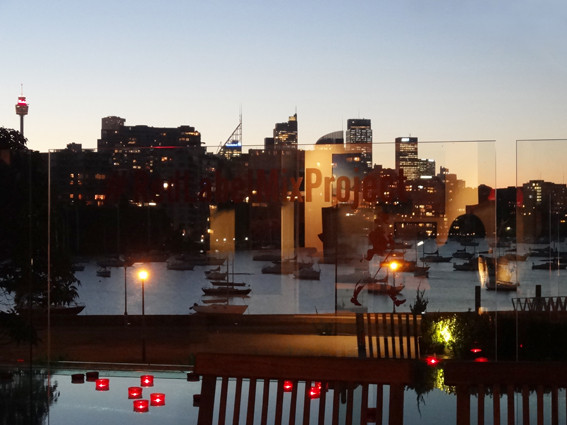 As the sun set over the city, an extravagant Johnnie Walker Red Label Mix Project bash kicked into gear at a private Darling Point residence. Guests, including me, arrived via luxury hire cars, traipsing down a long red-carpeted hallway into a luxury home complete with infinity pool and million buck view. 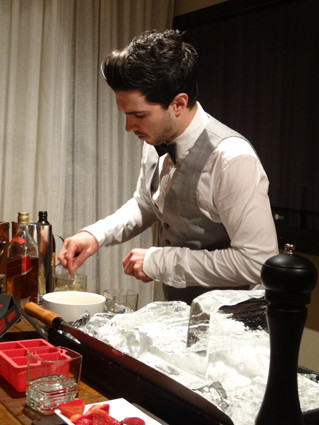 They'd called in world famous mixologist Tony Conigliaro to help reinvigorate the Johnnie Walker Red Label brand with a quartet of  whisky-based cocktails, which will make a public debut at the 2013 Melbourne Cup. However not being much of a Scotch whisky drinker, I started with a guided tasting from Low 302 mixologist, Reece Griffiths. 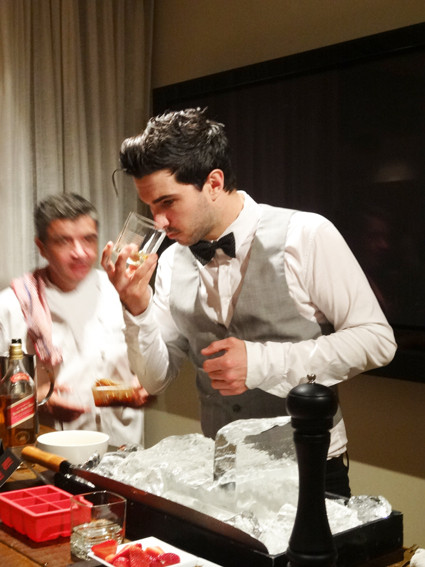 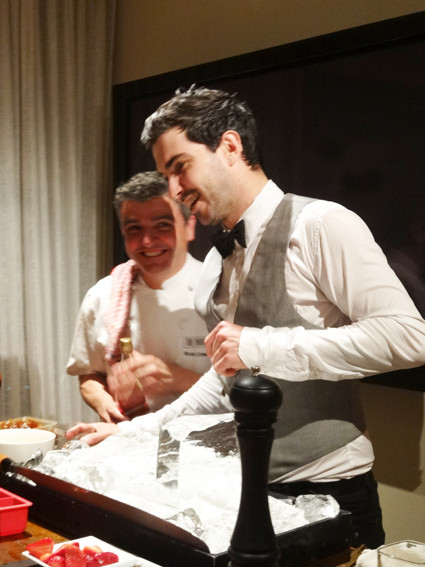 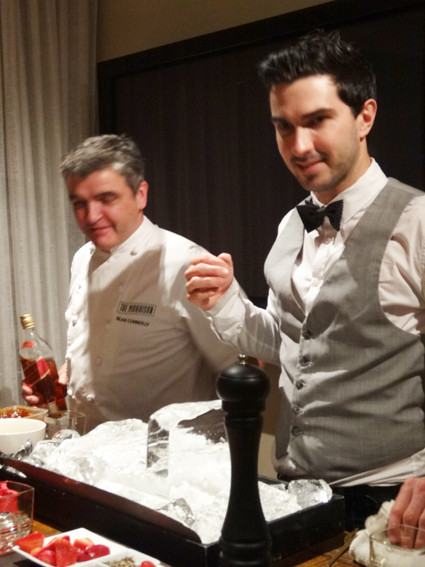 He was very serious about teaching me how to get the best flavour out of my Scotch, though there were a few er... distractions. 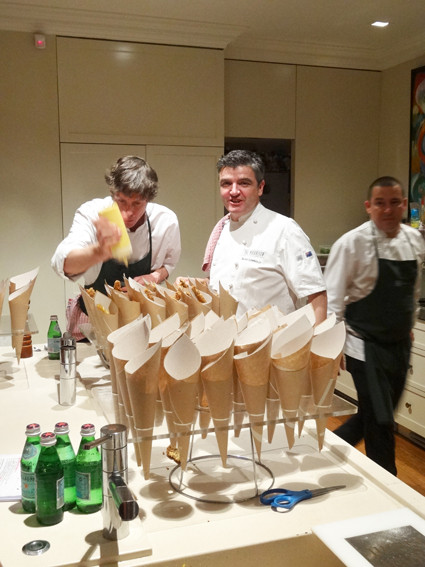 One such distraction was plating up a canape storm in the kitchen - Chef Sean Connolly - trotting out cones of fish and chips, alongside lobster and mango sliders; crab tortellini; and the crab and lettuce tacos from his bar food menu at The Morrison. (Keep your eyes peeled for my upcoming review.) 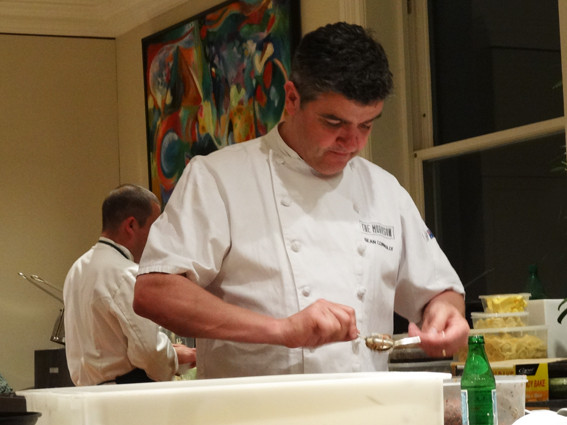 The only problem with creating these restaurant quality canapes in a domestic kitchen seemed to be the guests... 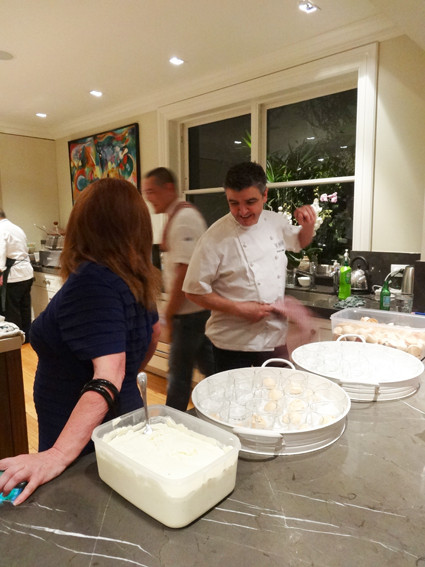 Chef Sean Connolly had to take some extraordinary measures to keep the Alternative Media Group Bar Fly out of his domain when she demanded to show him how quickly real quenelles could be formed. 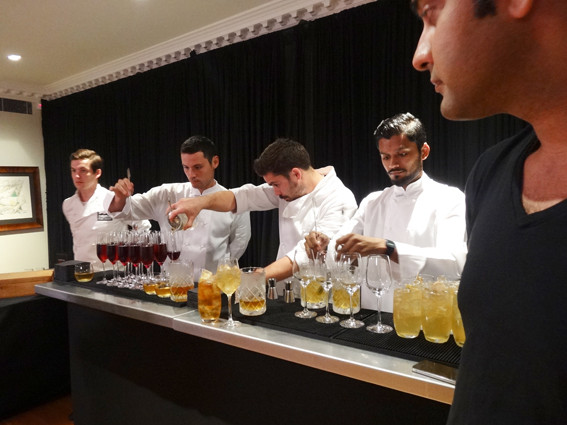 And what of the cocktails I was there to try, I hear you wondering? Well of the four drinks - Whisky Marrow, Golden Incense, Cypher and Clinquant - I preferred Cypher. To my taste buds, the reindeer moss syrup and ambrette worked the best with the whisky, giving you a sweet, smoky drink that was surprisingly easy (for a non-whisky drinker like me) to down. I should know, I had several. 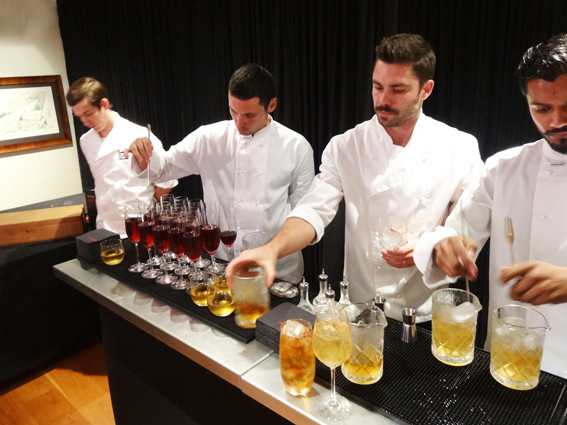 Usually a fan of the more unusual cocktails, particularly those with savoury ingredients, I really wanted to like the Whisky Marrow, served in a cute marrow bone cup. While the concept was good, the dominant note of liquorice overpowered the porcini mushrooms and the whisky, so despite the cute serving method, and agar agar which saw us spooning 'marrow' jelly into our mouthes, it didn't win me. 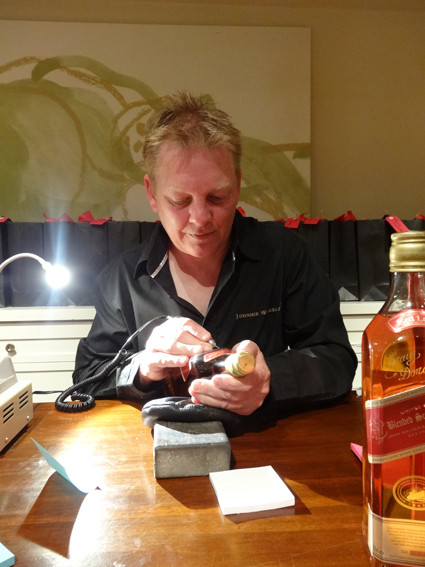 On the way out we were treated to a gift bag with a bottle of Johnnie Walker Red Label which we were able to have engraved onsite.