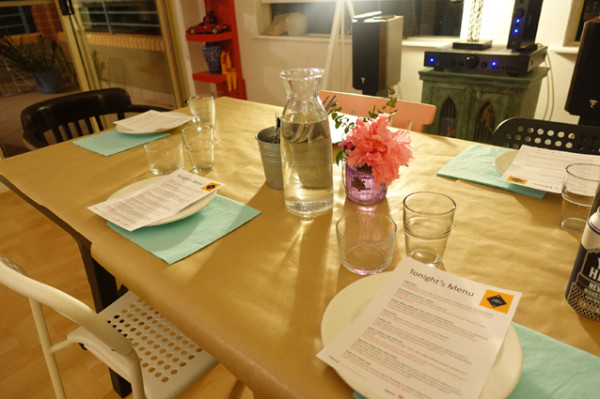 While popular in other global cities, supper clubs haven’t exactly taken off in Sydney. They sit somewhere between a restaurant and a dinner party. You sit down in someone’s home with a bunch of strangers for a paid meal, and by the end of the dinner, hopefully you've gained some new friends. As a result, supper clubs can be popular with expatriates, or anyone who is new to a city, as well as with singles, because you don't have to dine as a pair. 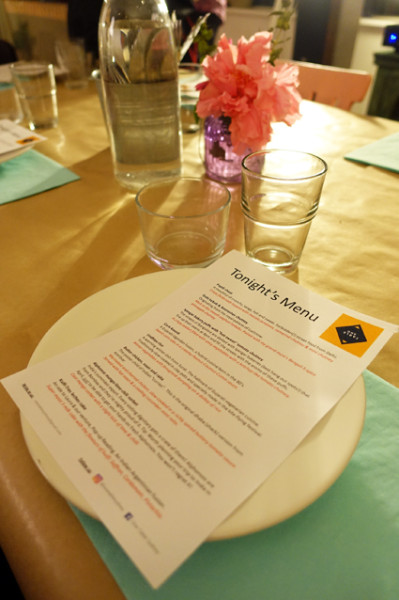 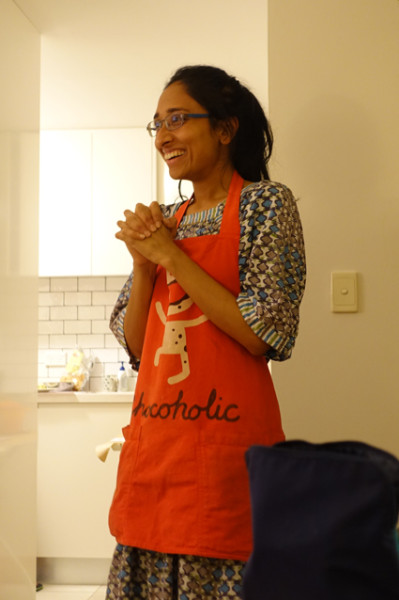 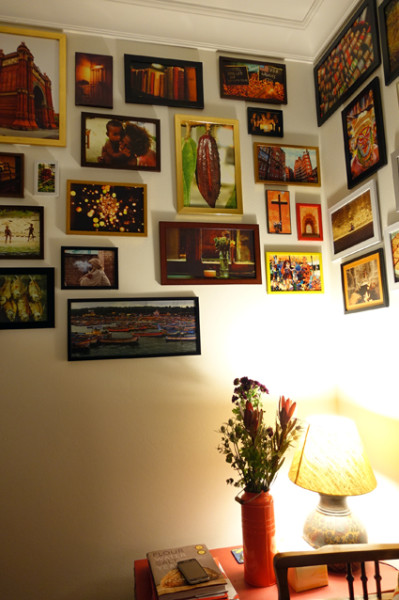 Fresh from running a popular English supper club, Pop-up Reading, with her friend Laura Gonzalez, recent immigrant, Anu Haran has her heart set on changing Sydney's opinion about supper clubs with the launch of One Table Sydney. “I think I just realised this morning what a challenging thing I was doing,” admitted Anu. 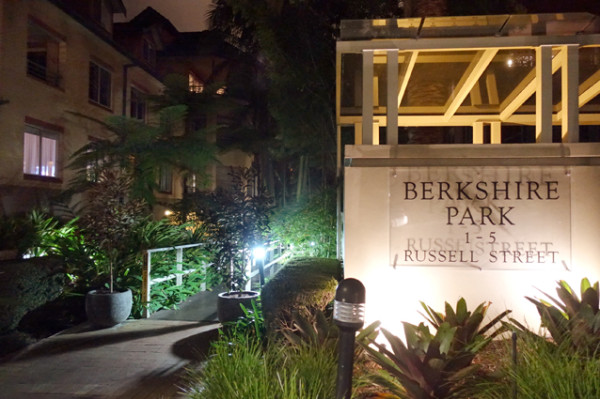 “Our supper club started monthly then it spiraled out of control - sometimes running even four times a week,” explained Anu to two packed tables of guests on the night I dined. 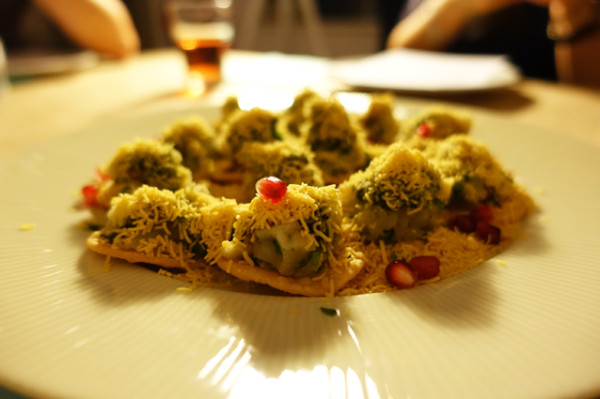 “Unlike the UK, I haven’t found really good Indian food here,” laments Anu. They seem like fighting words, because there are plenty of excellent Indian restaurants in Sydney. Anu explains her disappointment has led her to create a Hindustani menu designed to “take you on a journey around the country and show you things you haven’t tried.” It begins with one-bite Papdi Chaat inspired by the streets of Delhi. “The street food in Delhi is the best thing you can have, but you may get sick,” offers Anu as she darts in and out of the tiny domestic kitchen. It’s a pleasant mouthful involving besan (chickpea flour), vermicelli and boiled potato mixed with chat masala and lively green chilli, tamarind chutney and shiny red pomegranate arils, though nothing couldn’t find at restaurants like Chatkazz in Harris Park. 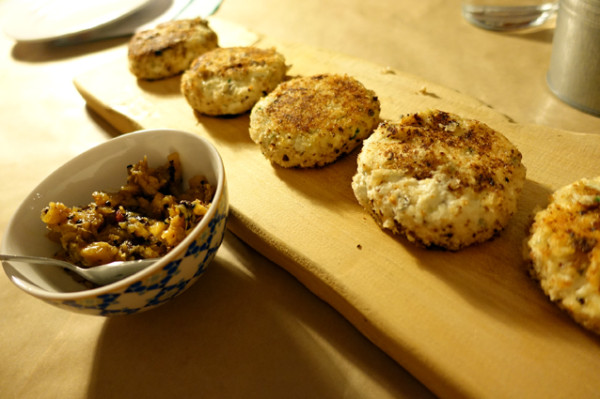 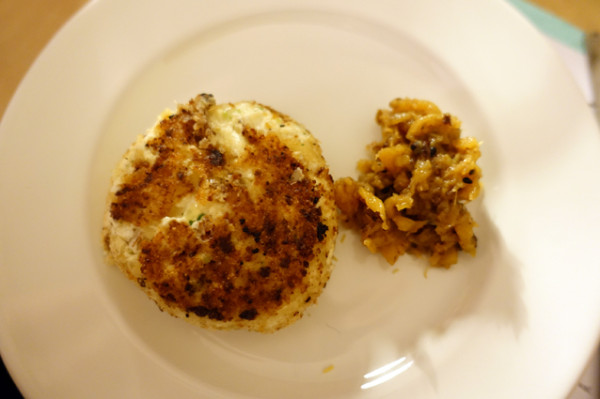 Dahi Kebab with Anarosher Chutney were definitely new to me. In this context, the word kebab is taken to mean rissole, rather than cooked meat. Anu’s version is drawn from the royal palaces of Lucknow in Northern India. Her patties are made from hung yoghurt, which is lightly crumbed and fried. Their chalky pleasure is balanced by mild, five-spice pineapple chutney. 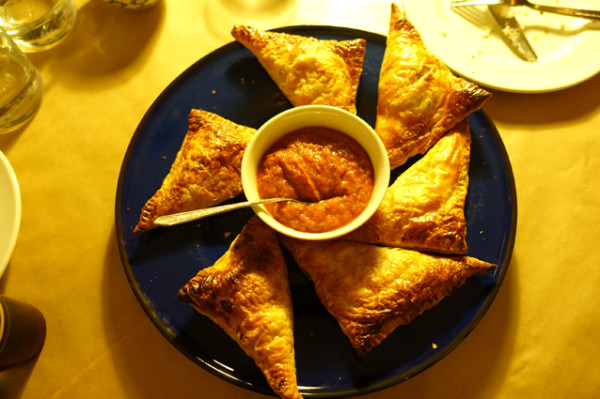 Also quite homely, Iyengar Bakery Puffs, are inspired by the Iyengar bakeries in Bangalore (Bengaluru) in Southern India. The vegetable filled pastry pockets, presented with tomato chutney, remind me of ways my mother used to dress up leftovers when I was a kid. This is at its heart home cooking rather than restaurant cooking, so the memory it inspired is not surprising. 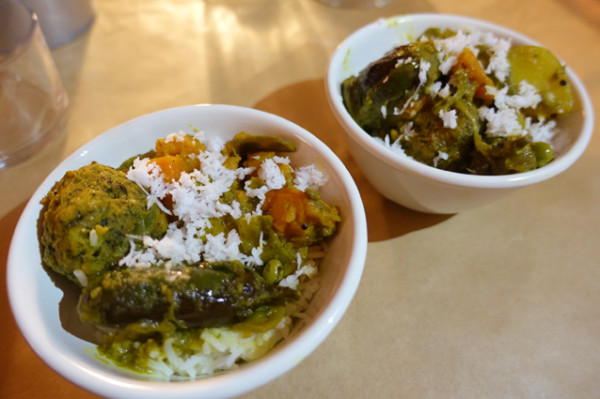 It’s important to remember, as you move through plainer dishes like Undhiyu Rice mixed with cooked winter vegetables and fenugreek-flavoured vegetable dumplings, One Table Sydney is, at its heart, home (rather than restaurant) cooking. 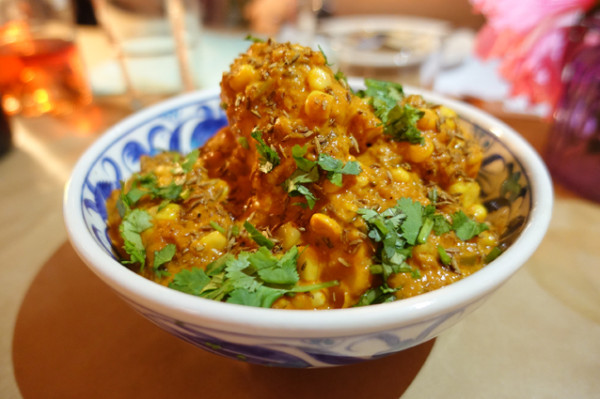 Not being in a restaurant, you should feel free to pick up your Corn Kasodi and get a bit messy over the brown paper table coverings. It's an odd Gujarati-Ugandan fusion dish, with corn on the cob sitting in a sweet, creamy coconut, cumin and peanut sauce. It came about in the '80s through Ugandan immigration to Gujarat, on India’s west coast. 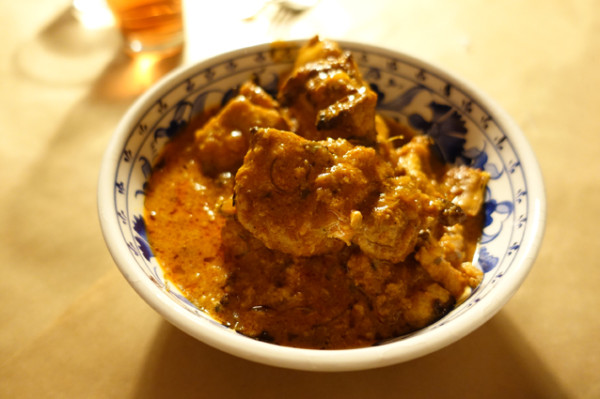 By this stage of the meal, I’m really missing chilli heat, so I’m delighted when Anu’s version of everyone’s favourite Indian curry, Butter Chicken, turns out to be moderately spicy. Anu takes marinated and charred chicken and teams it with a buttery, spicy, tomato-based gravy according to a dhaba (shack) style recipe from Amritsar in north-western India. 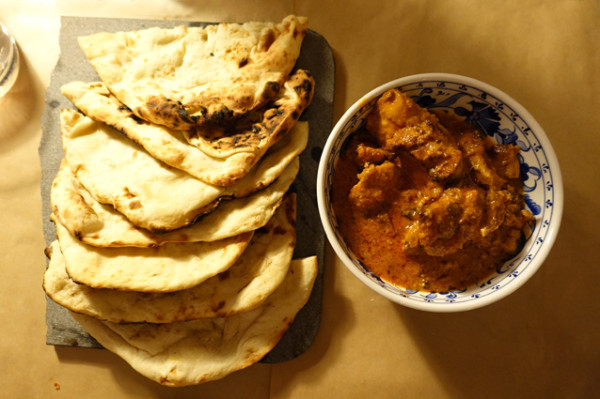 We eat the slightly too sweet curry with Anu's fluffy naan, which actually are better than many I've eaten in Sydney's Indian restaurants. Sadly we're done by the time Anu remembers she intended to serve this dish with cooling cucumber raita. 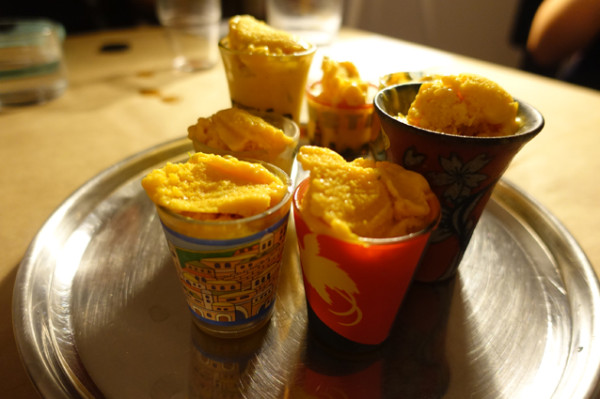 Cooling our palates with an Alphonso Mango and Lime Sorbet, where the sweetness masks a little chilli kick, we move into dessert. 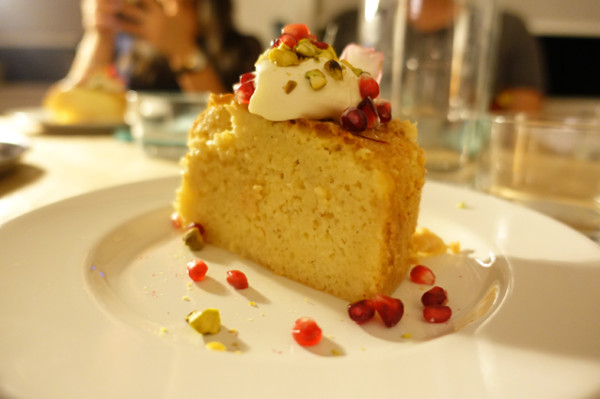 The Kulfi-Tres Leches Cake is Anu's own invention. It pays homage to the heritage of her previous partner in supper clubs, Laura, who she met on a train. Popular in Argentina (and across the Americas), tres leches cake usually sees sponge cake soaked in three kinds of milk. Anu has switched out the milks for cardamom sugar syrup, and topped it with pistachios and saffron cream, giving you the three main flavours of kulfi (Indian ice cream). The cake is moist and very easy to eat, and the story behind it - delivered in dribs and drabs as Anu brings out dishes - is intriguing. That’s probably my only gripe with the supper club format, over say, a dinner party where your host dines at the table with you.

For your $55 spend at One Table Sydney, you receive an 8-course dinner. As it's not a restaurant, you’re free to bring your own grog. Upcoming dates include 11, 18 and 25 May, with dinner starting at 7pm each evening. Booking is obviously essential, as this is not a commercial kitchen, and the simply furnished room only accommodates a limited number of guests.


One Table Sydney
1-5 Russell Street, Wollstonecraft
Ph: (0403) 656 626
Email: OneTableSydney@gmail.com
By this stage of the meal, I’m really missing chilli heat, so I’m delighted when Anu’s version of everyone’s favourite Indian curry, Butter Chicken, turns out to be moderately spicy. Anu teams marinated and charred chicken and teams it with a buttery, spicy, tomato-based gravy according to a dhaba (shack) style recipe from Amritsar in north-western India. We eat it with her fluffy naan though we’re mostly done by the time she remembers her cooling cucumber raita.
Tags: food
Subscribe